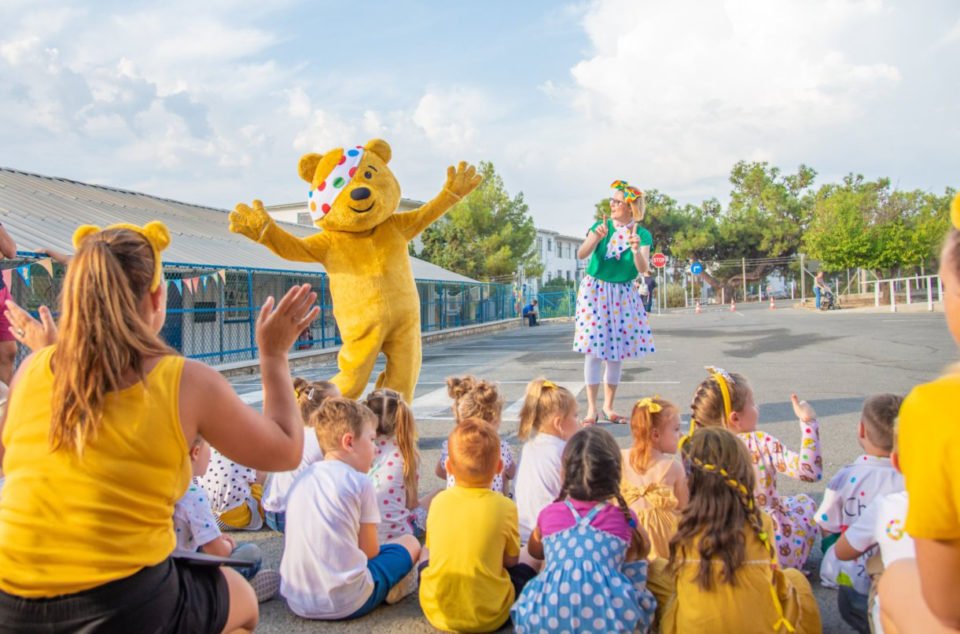 The British Forces Cyprus community featured in a two-minute video on the BBC’s Children in Need charity appeal last week after raising £10,000 for the event.

Children from schools throughout the Bases were joined by their teachers, parents and military and civilian units, to help contribute towards the staggering final total of almost £50,000,000.

During his stay, Pudsey, who has been the official face of Children in Need for 34 years, flew with 84 Sqn, marshalled in aircraft, helped sort post for personnel and their families across the island and trained with the Military Working Dogs.

He also stretched his vocal chords with the Episkopi School choir, read books with children at the Dhekelia Primary School and did some early morning exercise with the children at Ayios Nikolaos Primary.

Tracy Gibbs, a year two teacher at RAF Akrotiri School said the children were delighted to welcome their special guest: “Every year the children at Akrotiri school help raise funds for Children in Need.

“To have Pudsey travel abroad for the first time to acknowledge this was super important to them. The children here live away from their extended families back in the UK for several years but they still want to feel part of the UK community and this was evident as Pudsey pulled all of the British Forces Cyprus community together to work towards a common fundraising goal.”

Milly Charnock, an 11-year old, year six student at the school said: “I was so excited to meet Pudsey. My favourite part of the visit was when he danced with us at ‘Wake Up Shake Up’ first thing in the morning. I’m really proud that we managed to raise so much money, especially when there are other children who need it so much.”

The trip, which was set up by the Charities Committee at RAF Akrotiri, proved a huge success and Flight Sergeant Ken Winslade, who coordinated the project, was overjoyed with how it all unfolded.

He explained: “We were over the moon when the BBC confirmed that Pudsey was going to fly to Cyprus. The buzz all over the Bases was absolutely amazing and it really brought the entire community together. Our initial target was to raise £5,000, so we were delighted when we hit the £10,000 mark.

“Working with Pudsey has been great fun, he is a fantastic character and very keen to help around the station. The highlight was when he marshalled in a passenger plane on the runway but seeing the faces of the children as he arrived at the schools in Episkopi, Dhekelia and Akrotiri was wonderful too.”

RAF Akrotiri Station Commander, Group Captain Chris Snaith, who had Pudsey as a house guest during his visit, said: “Children in Need supports so many young people across the UK, so we were absolutely delighted to host Pudsey in October to help us fundraise for this great charity.

“He attended several events on the station and in wider British Forces Cyprus. I am extremely proud of the fundraising efforts of everyone. We all pulled together to fundraise and had a lot of fun at the same time.

“Whether it was a dress in pink day at the school, a quiz at the Rugby Club, car washing by the Fire Section or one of the many other great activities that took place to raise money, the whole community pulled together for this fantastic cause. To have Pudsey here to help out was certainly a boost for moral for all of us who are far from home.”