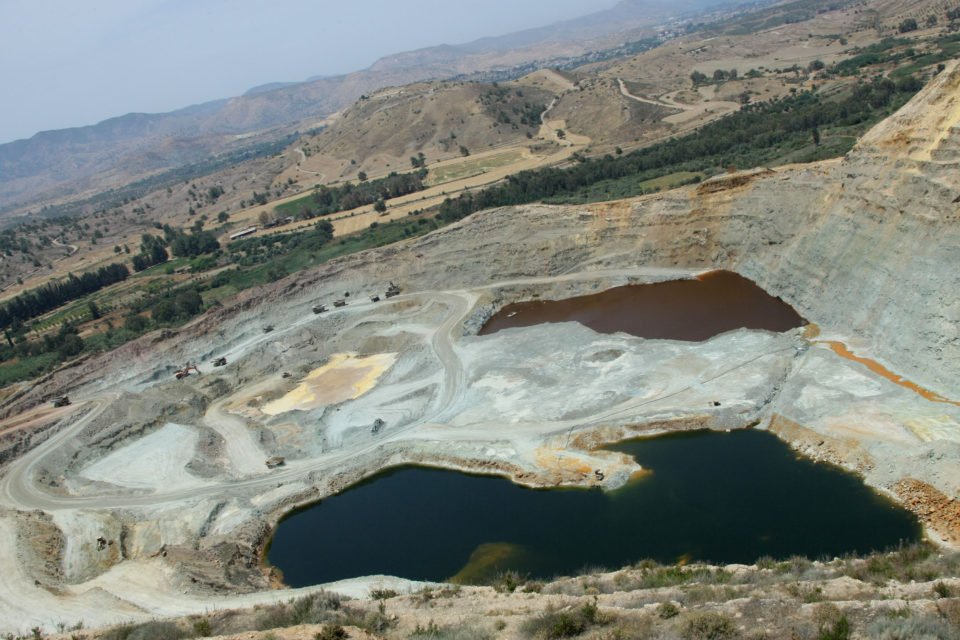 A bi-communal protest against the use of toxic chemicals in Skouriotissa mine is taking place on Saturday close to the Ledra Street checkpoint in Nicosia, while the mine operator said on Friday their use of chemicals was above board.

Some 30 Greek and Turkish Cypriot NGOs as well as other groups will gather on Saturday at 11am to call for a complete ban on cyanide use in Skouriotissa mine. The use of cyanide has polluted the flora and fauna of the surrounding areas of Lefka, Xeros and Mitsero, and affects people in both communities, they have said.

Skouriotissa mine, which extracted copper had been closed for many years was re-opened recently by companies looking for precious metals.

“Hellenic Copper Mines Ltd, the holding company, along with a foreign company, started bringing even from African countries thousands of tonnes of materials to extract precious metals, without the relevant environmental studies, approvals and permits,” said the organisations in an announcement.

“HCM’s irregularities have no end. The company is using cyanide and does not have a proper licence, as regulations for the use of the chemical have not yet been finalised and enforced,” it added.

The company defended its position on Friday, issuing an announcement to say they are operating legally despite the fact there are no official regulations for the use of cyanide yet.

“The use of cyanide in the processing of gold ore is fully regulated by the relevant European Union directive. The cyanide content of the ore piles is well below the 10ppm requirement of the European Directive,” it said.

HCM added that “the Department of the Environment has submitted relevant regulations for approval to Parliament to harmonise our Mining Waste Management Legislation with the European Directive”.

“The European Parliament voted in favour of the total ban of the use of cyanide in Europe almost unanimously in 2010 and 2017, explicitly stating that the only way to get rid of its effects is to completely ban it” organisers of the protest said on Friday.

While several EU and non-EU countries complied with the European Parliament’s resolution, Cyprus had not banned the use of cyanide. “As a result, we are in danger of becoming a dump of mining waste with 12 million tonnes of such waste in Lefka and Xeros regions,” said the announcement.

Meanwhile, Akel MEPs, Giorgos Georgiou and Niyazi Kizilyurek have conveyed the demands of the protestors to the European Commission asking whether it was aware of the harmful consequences caused in Cyprus by the issuing of the mining licence. “Does the Commission intend to propose a directive for best practices with regard to the management of mining waste,” asked the two MEPs.

Protestors demand the restoration of the already polluted areas, the protection of forests and appeal for investment in sustainable development, along with the termination of the use of imported or local toxic chemicals in mining.

They called “on all environmentally aware citizens, regardless of party affiliation, to join us in the bi-communal protest,”

Residents demanded closure of the Skouriotissa mine earlier in October, arguing it was operating without the appropriate licence and the use of cyanide to extract gold allegedly increased cancer risks in the area.

The Green Party also issued an announcement on Friday backing the protestors. Several members of its leadership would take part in the protest against the use of cyanide for the extraction of gold, it said.