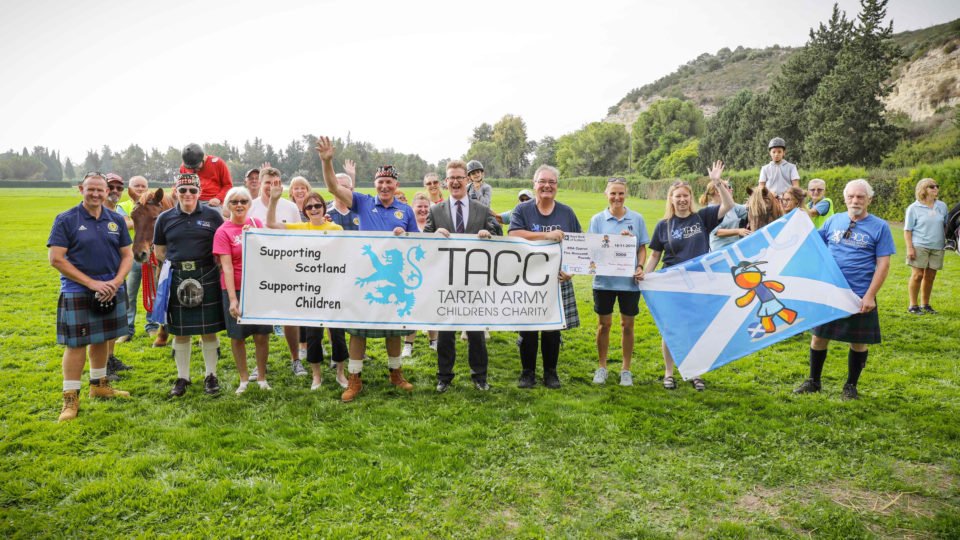 The official Tartan Amy Children’s Charity visited Riding for the Disabled in Episkopi’s Happy Valley to donate £5,000 to the worthy cause

Ahead of last weekend’s Cyprus versus Scotland European Championship qualifying match in Nicosia, the official Tartan Amy Children’s Charity (TACC) visited Riding for the Disabled in Episkopi’s Happy Valley to donate £5,000 to the worthy cause.

The Tartan Army, the name given to Scotland football supporters, is known all over the world for its passionate support of the national team and TACC, an official offshoot of that, is a registered charity which “aims to support disadvantaged children in Scotland and overseas”.

Riding for the Disabled, which provides riding instruction for people with disabilities, is reliant on donations to continue its outstanding work and this latest contribution is intended to help the charity purchase a new pony.

But this was not the first time that TACC has donated to the cause, having previously worked with the RDA in Scotland, as Dorothy Wilson from the charity explained.

She said: “TACC have previously donated to Riding for the Disabled in Scotland and Davy Provan, who is a Scot living in Cyprus, suggested the RDA Episkopi and as we are aware of the benefits this can bring to children, I contacted Wendi Quinn from the RDA to ask if they had any project that might meet our criteria for a donation.

“The money was raised through the sale of t-shirts, fundraising from ‘The Kiltwalk’, charity events, the TACC lottery and donations from Scotland supporters.

“Our overseas donations started in 2006 with a project called ‘Tartan Kiev’ and donations have been made in countries where the Scotland national team have played qualifying matches ever since.”

Also present for the donation was British High Commissioner in Cyprus, Stephen Lillie, who said: “We welcome the Tartan Army Charity to Cyprus and would like to express our admiration and respect for their great work, helping children in need around the world. We are certain that the Tartan Army’s donation will make a real difference to the work of Riding for the Disabled.”

President for the RDA, Hilary Thomson, speaking to Sky Sports News in Happy Valley, explained how much of an impact the donation would make to the charity.

She said: “Riding for the Disabled is a charity totally reliant on donations and volunteers, so it is just wonderful to have this fantastic donation of £5,000 so that we can buy a new pony.

“They (the right type of pony) are quite difficult to find, but we think we have found one in England and we are going to have it shipped over, which is obviously an expensive business and we are just thrilled to be able to have this money to help these children.”