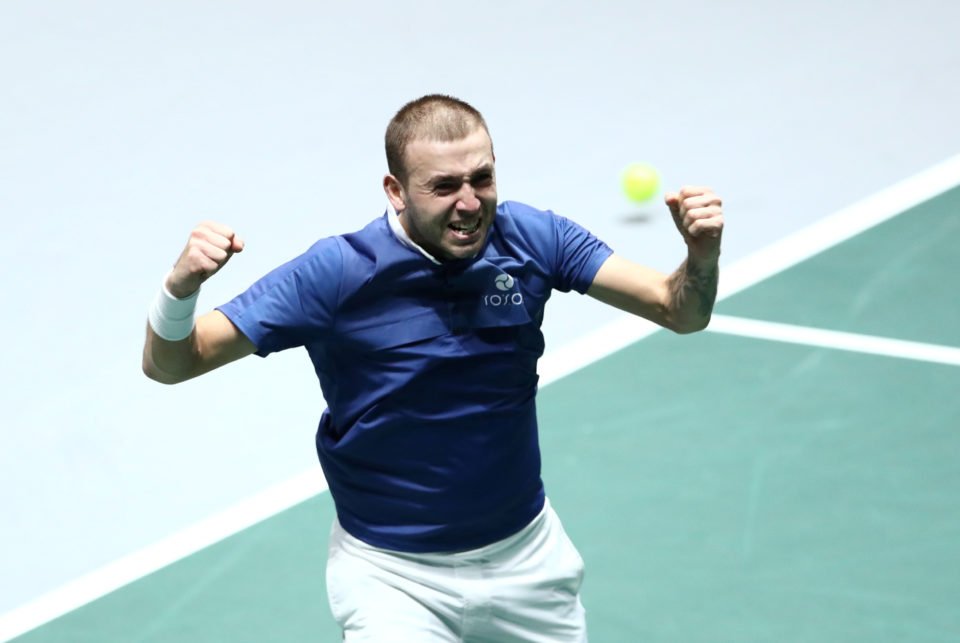 A delighted Dan Evans turned around his fortunes at the Davis Cup finals in Madrid to send Great Britain through to the semi-finals for the third time in five years with victory over Germany.

Evans had lost his first two singles matches against Dutchman Robin Haase and Alexander Bublik of Kazakhstan from a set up but refused to accept the same fate against world number 35 Jan-Lennard Struff.

With Andy Murray – who was again left out of the side – cheering on from the sidelines, Evans withstood pressure in the third set to come through a deciding tie-break and win 7-6 (6) 4-6 7-6 (2).

Coupled with another impressive win by Kyle Edmund, who defeated Philipp Kohlschreiber 6-3 7-5, Evans’ victory was enough to seal the tie for Britain without the need for a deciding doubles rubber.

Evans’ place had been in question but captain Leon Smith stuck with him ahead of Murray and was rewarded with a display of real skill and heart.

He dominated the deciding tie-break and, when Struff’s final shot flew wide, Evans leapt high and threw his racket into the air before running to celebrate with Smith and the rest of the team.

Evans said: “I lost some tough matches just lately. I felt like I had let the team down the last two days.

“So to come back and get it like that, it’s amazing. They supported me through everything. I am so happy for them that we are through.

“I served great. I thought I played well the last two days but couldn’t get over the line. I didn’t feel great before the match, you are down, you are losing. Everyone in the team has kept me going, kept me positive.”

It was as just as special a moment for Smith, who has been one of the biggest believers in Evans’ talent despite the many ups and downs of the 29-year-old’s career.

Britain’s 2015 title triumph was, of course, remarkable but to have reached the last four again with Murray only playing one rubber across three matches is a very impressive achievement.

Smith said: “We’ve got a really good squad. The players’ rankings are going up. They’re all established on tour. I think it’s great.

“I really liked seeing how Andy supports the guys as well today. He genuinely wants everyone to be up in the rankings, doing well, supporting each other.

“And I think it’s a good feeling for everyone. We know it’s not just about Andy. He’s still a massive part of what we do, and of course he’s going to be. But it gives everyone confidence when people can step up and develop.”

Smith will have another selection decision to ponder ahead of Saturday’s semi-final, where formidable hosts Spain and Rafael Nadal await after their 2-1 success against Argentina.

Murray will have had another 24 hours to work on his fitness, and Smith confirmed the Scot’s issue is not injury but a lack of peak conditioning.

“Where Kyle and Evo are at is ahead of where Andy is just now,” said Smith. “And when you’ve got two very, very good players like Kyle and Evo that are ready to go, then that’s what we do.”

Evans could well be the one facing Nadal, and he said: “It’ll be a great atmosphere I’m sure. Hopefully, we’re walking on to the court 1-0 up so it makes it a bit more pressure on him.

“It’ll be a great occasion. I’ll go on the court believing I can win otherwise there’s no point in walking on.”

The only disappointment was the size of the crowd, which appeared noticeably smaller than for Britain’s two group matches – a concern Murray had raised ahead of the event.

The Scot put a message on Instagram on Friday night offering tickets to British fans wanting to attend the semi-final, with the Lawn Tennis Association attempting to boost the numbers.

The LTA, which will receive more than £500,000 in prizemoney from this event, has invested a five-figure sum in buying blocks of tickets.

“The LTA has answered the team’s call and secured as many tickets as they could for British fans for tomorrow’s semi-final tie,” and LTA spokesman said.

The victory over Germany also means Britain are guaranteed to be back in Madrid next year, with semi-finalists exempted from March’s play-off round.

Rick Stein: I find it difficult not to eat what’s put in front of me