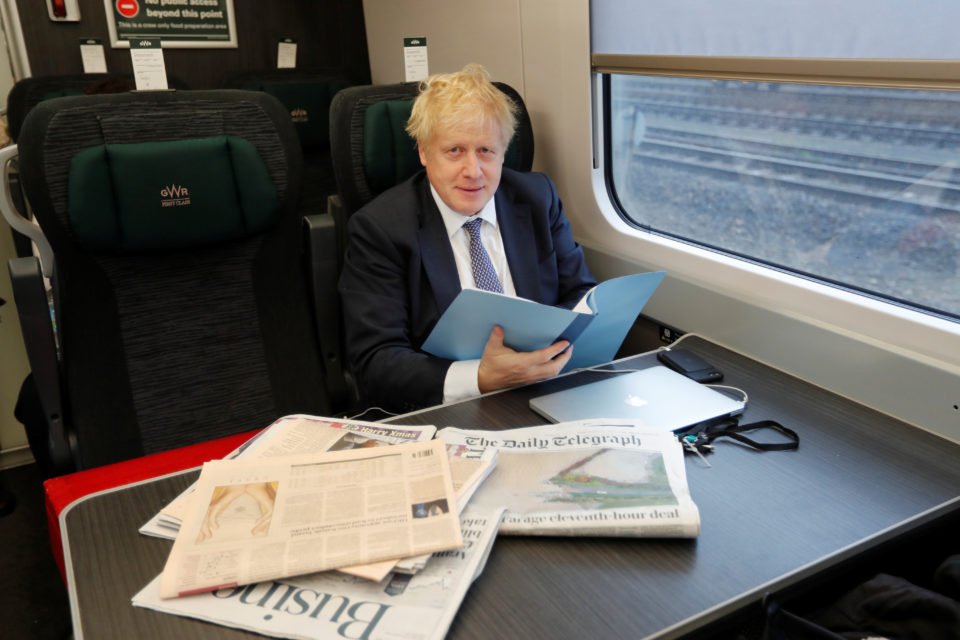 Boris Johnson on a train, on his way to an election campaign event near Castle Cary

The Reshaping of British Railways, published in 1963, made its principal author, Dr Richard Beeching, the most hated civil servant in Britain.

Beeching became so notorious his name is still invoked in an election campaign almost 60 years later, with politicians promising to reverse some of the line closures he recommended.

Beeching’s report is still blamed for the closure of hundreds of small mostly rural stations and thousands of miles of track in the 1960s and 1970s.

Beeching achieved an infamy unique for a civil servant – normally reserved for top politicians such as Anthony Eden (Suez), Neville Chamberlain (appeasement) or Thomas Cromwell (dissolution of the monasteries).

Decades after the report’s publication, the bitterness is still alive; his elimination of rural lines was fictionalised in a comedy Oh, Doctor Beeching! broadcast in 1995/96.

Communities that lost stations and lines as a result of the Beeching Axe have never forgiven or forgotten the rail chief who recommended the closures to the Conservative government led by Harold Macmillan.

Now another Conservative government led by Boris Johnson is pledging 500 million pounds for a Beeching Reversal Fund to re-open some of the lines and stations as it campaigns for re-election next month.

“It’s been estimated that Dr Beeching’s rail cuts of the Sixties led to the widening of the gap with London in the places that were cut off,” according to transport minister Grant Shapps.

“The fifth of the country most exposed to closures between 1950 and 1980 saw 24 per cent less population growth than the fifth least exposed,” Shapps wrote in an article published in The Daily Telegraph on November 15.

“Among the consequences: house prices up in some areas, economic deprivation in others,” Shapps wrote in an article headlined “We want to banish the shadow of Dr Beeching and give communities more rail connectivity”.

But much of the blame heaped on Beeching is unfair and undoing the closures is not a cost-effective way of increasing transport connectivity for small rural communities and “forgotten towns”.

Britain built one of the world’s largest and densest rail networks during the nineteenth century, which grew as a result of fierce competition between small private companies to lay track and open new routes and services.

The network peaked at around 20,400 miles in the mid-1920s, but even then there were concerns about mounting losses being made by the private operators.

By the 1960s, the rail network had been nationalised, but it was in deep financial trouble, reporting losses every year between 1948 and 1962, except for a small profit in 1952.

Passenger numbers were still rising slightly, but freight had started to fall, as more commodities were transported on the improved road network.

In 1962, the British Transport Commission reported the railways lost 156 million pounds, the equivalent to around 3.3 billion pounds today adjusted for inflation, and losses were accelerating.

But Beeching’s urgent task was to make the network financially sustainable while reorganising it to create new long-distance express passenger and freight services.

Britain’s rail network had grown in the nineteenth century via competition and speculation, rather than central planning, so it contained a lot of redundancy and low-volume lines that were never profitable even when they first opened.

A century later, with a continued shift in population and activity from rural areas to the cities and coal-mining regions to the southeast and London, the network was even more inconsistent with passenger and freight needs.

Half the total network accounted for just 7.5 per cent of combined passenger and freight miles, according to the traffic study.

Two-thirds of the stations accounted for only six per cent of passenger receipts. Every class of passenger and freight service was losing money, except coal.

Beeching cited the case of the 23-mile Swaffham to Thetford branch line in East Anglia, with four intermediate stations, six trains per weekday in each direction, carrying an average of just nine passengers.

The 42-mile rural stopping service between York and Hull, with eight intermediate stations, ran nine trains every weekday in each direction, with an average of 57 passengers.

Beeching’s solution was to close loss-making stations and lines, reduce the number of local stopping services, and free up capacity on the remaining track to run more long-distance express passenger and freight services.

Railways have high fixed capital costs compared to other forms of transport and are most suited to longer routes with high volumes of passengers and freight.

“The railways had been constructed in Victorian times when the efficiency of road transport was no match at all for the all-pervasive railway,” wrote transport historian Philip Bagwell.

“In consequence many lines were built to link small towns and villages where the amount of traffic was often insufficient to cover working expenses even in the days before motor transport.”

Stations were still so closely spaced in 1961 that they served an average radius of just 2.5 miles, according to the British Transport Commission, which was never going to generate enough passengers and freight.

In most cases, local stopping services could be more cheaply and effectively served by motor cars or public buses, and most routes already had such services at the time of the report’s publication in 1963.

Beeching may still be a hate figure for some rural communities and small towns, but it makes no economic sense to reverse most of the station and line closures.

Re-opened stations and lines would not be able to break even in most cases and would require enormous amounts of subsidy from taxpayers.

If the government wants to provide increased public transport connections in rural communities and small towns, the most cost-effective way is through a larger and more frequent bus network.

If the government wants to increase connectivity, it should increase subsidies to bus operators to boost the frequency and extent of their networks.