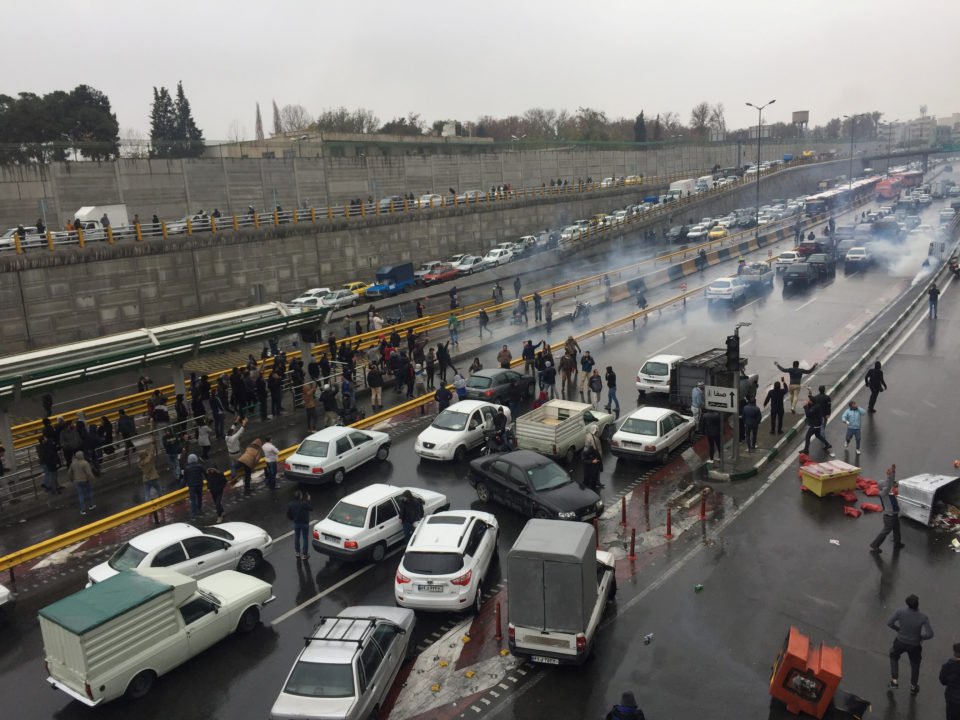 People stop their cars in a highway to show their protest for increased gas price in Tehran, Iran November 16, 2019. Nazanin Tabatabaee/WANA (West Asia News Agency) via REUTERS ATTENTION EDITORS - THIS IMAGE HAS BEEN SUPPLIED BY A THIRD PARTY

This year marks the 40th anniversary of the Iranian Revolution. It begins to seem possible that it could be one of the last, if not the very last.

The protests that broke out on Friday in at least 21 cities in Iran seem to have died down, although that is uncertain since the entire country is silenced by an almost complete internet shut-down. But the death toll, according to Amnesty International, is at least 106. Other reports suggest that it might be twice that number.

This is at least five times the number that were killed in the last outbreak of protests in late 2017, and unofficial reports put the number of injured at around 3,000. Snipers have been firing into the crowds, who are denounced by state-controlled media as ‘hooligans’ and ‘thugs’ who are under foreign influence, or even in foreign pay.

The pace of the protests is picking up, too. The previous mass protests were way back in 2009, and were against the manipulation of election results, not against the regime as a whole. In 2017, and again this time, they were against the whole system of repression and corruption that sustains the theocratic rule of the ayatollahs.

This latest and biggest outburst of defiance in the streets is at least partly due to the unilateral trade sanctions imposed on Iran last year by the Trump administration. Washington scarcely bothers to deny that the real objective of its sanctions is regime change, or that the impoverishment of the Iranian population is the means chosen to attain that goal.

In the past year Iranian oil exports have dwindled to less than 200,000 barrels per day, compared to two million bpd before the US reimposed oil sanctions almost exactly a year ago. Inflation has soared, the value of the Iranian rial has collapsed, and life has become much harder for the poor.

The poor have nothing to fall back on and quickly become desperate. The young had nothing to start with, and see no future for themselves in an economy that is currently shrinking by 6 per cent annually. These two groups are the real target of the sanctions, and the strategy seems to be working.

The trigger for these protests was a 50 per cent rise in the price of petrol (gas), but that was just a last straw, not a major economic blow to the poor. It’s still only $0.12 a litre ($0.45 per US gallon), and most of the poor don’t have cars anyway. Indeed, the government’s stated reason for the price increase is to raise $2.5 billion a year for extra subsidies to 18 million families struggling on low incomes.

The poor are not impressed, since their health costs have gone up by 20 per cent and the price of meat and vegetables has risen by around 50 per cent in the past twelve months. It’s their anger and desperation that drive the poor and the young out into the streets, but it’s really the sanctions that have made them so angry and desperate.

So can the religious despotism that has ruled the country for the past forty years survive? In the short run, probably yes, because the ayatollahs have several million fanatical and well-armed supporters in the Revolutionary Guard and its part-time affiliate, the Basij militia. In the slightly longer term (2-5 years), probably not.

Because most Iranians follow the Shia version of Islam while all the countries around them except Iraq are overwhelmingly Sunni, Iran is seen as a special case whose politics has little relevance for elsewhere in the region. That is not true. The differences are big, but the politics in the region’s various countries tends to march in step, or even to rhyme.

Right next door to Iran, in Iraq, other young men are protesting in the streets, and there too they are being shot down by the ‘security’ forces. Two months ago thousands of young Egyptian men and women took to the streets to demand the resignation of the military dictator, Abdel Fattah el-Sisi. Four thousand were arrested. The non-violent revolutions in Sudan and Algeria continue.

In Egypt, Algeria and Sudan money and privileges are monopolised by a military elite, in Iraq by an elected but deeply corrupt civilian elite, and in Iran by a religious and paramilitary elite. There is poverty and anti-regime anger everywhere, but in Iran it is also being stoked by Donald Trump.

Revolution in Iran would probably be a long and bloody process, because the theocratic regime has a coherent ideology and would go down fighting. Nobody knows what kind of regime would follow, and nobody knows if such a revolution would stay confined to Iran.

Despite the Sunni-Shia gulf, the last revolution in Iran inflamed similar Islamist movements in many Arab countries. Another Iranian revolution could also ignite anti-regime revolts elsewhere in the region. Trump should be careful what he wishes for.

Trombone and piano come together for concert