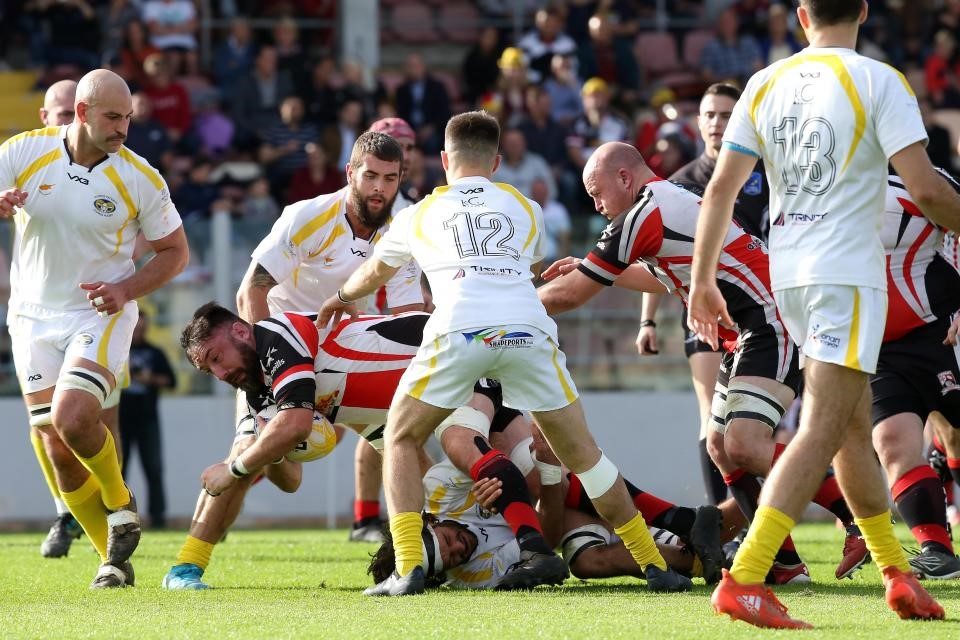 On the occasion of the 50th international for the Cyprus national rugby side, the Mouflons pulled off a superb 18-16 win at group favourites Malta over the weekend in the Conference South 1 division of the Rugby Europe International League.

Cyprus started the stronger, forcing the Maltese back and in the fifth minute Malta gave away the first penalty. Marcus Holden successfully made the kick giving Cyprus an early three-point lead.

Cyprus continued the early pressure, winning a lineout five metres out from the Maltese try line. Mario Zakakiotis, the Cyprus hooker, overthrew the ball which allowed Malta the chance to win the ball and defend the line.

Cyprus however stood firm and forced the ball forward once again, and after a few moves via the forwards, the ball was deftly moved out and then kicked over the Maltese defence.

Sam Burns reading the ball well, quickly slipped through the Maltese defence but unfortunately dropped the ball over the dead ball line. It was a great opportunity to increase the lead, but with the sun beaming directly down on him, it was very difficult to see the ball.

Malta’s response from the kick-off saw them forcing their way through into the Cypriot half. They managed to force a lineout five metres out and from the throw in, Harry Collins dinked his way past his marker to touch the ball home.
The Maltese kicker Dudman missed the conversion to leave Malta 5-3 ahead.

The Mouflons were proving to be a handful, with the Maltese using all their experience and resilience to deny their opponents from scoring the first try of the match.

However, following a handling mistake from Malta’s Richard Gum, it paved the way for the Mouflons to break through the Malta defence. Dom Georgiou, brother of Chris, in his second international, scored underneath the posts and Holden successfully converted the kick to put Cyprus 10-5 ahead.

More woes followed for Malta, as further pressure from Cyprus resulted in an infringement just inside the Malta half. Referee Ethan Glass of Switzerland awarded a penalty to Cyprus, with Holden again finding the posts to extend Cyprus’ lead to 13-3.

The Maltese players kept their calm and R Gum made amends for his earlier mistake when he whizzed his way past three players to touch home. Dudman again missed the conversion to leave Cyprus 13-10 ahead at the interval.

It was all to play for in the second half and similar to the previous Croatia match this result could have gone either way.

After the break, Malta successfully put themselves back in the game, applying pressure and forcing Cyprus into a mistake, which resulted in a penalty kick. Dudman restored parity from inside the Cyprus half, successfully converting the kick to level the score at 13-13.

It was anyone’s game now with both sides giving everything to pick up valuable points that would put them in the driving seat.

Midway through the second half Malta won a penalty and again Dudman made no mistake, to give the home side a precious three-point lead – 16-13. The 3,000 strong crowd became more vociferous, sensing another Maltese victory.

Dudman could have further extended Malta’s lead from another penalty but this time he missed the target to leave the match wide open. This was to prove costly.

With five minutes of normal time remaining, the Mouflons showed great resilience and an undying belief and confidence; they orchestrated a swift counter-attack through Chris Georgiou who set up George Agathocleous to touch home and give Cyprus the win.

The final whistle came over six minutes later to the jubilation of the players, coaches and travelling fans at the Hibs stadium, Paola.

Cyprus Rugby Federation President Constantinos Constantinou who was at the game stated: “I could not have asked for anything more on this momentous occasion of our 50th game. The foundations built by our coaches Andrew Binikos and Andrew Barnett over the past few years with the impetus of a new team manager are starting to show the fruits of their labour.”