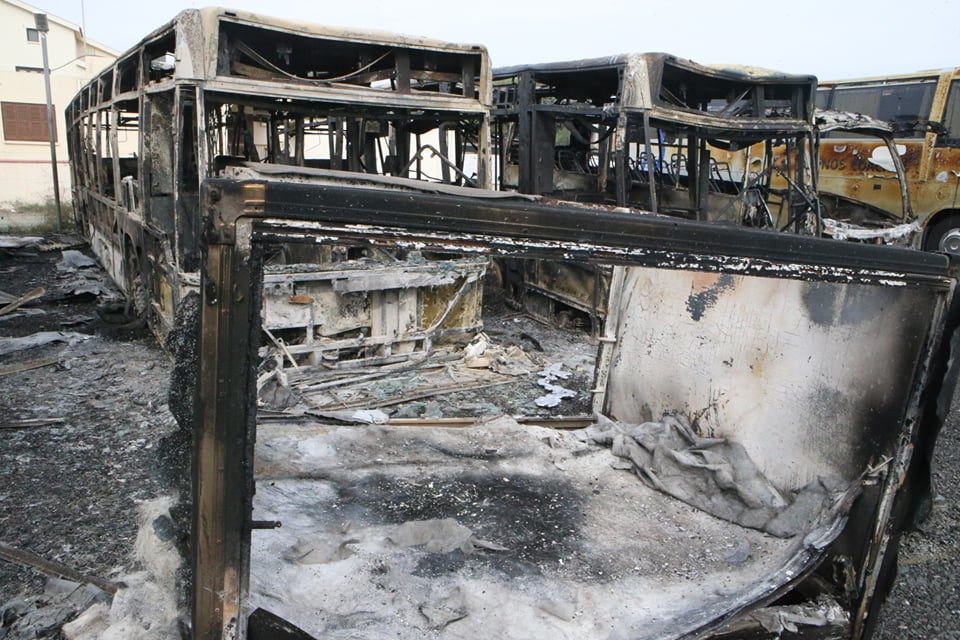 The burnt shells of the Kapnos buses (Christos Theodorides)

Eight buses were torched in Larnaca early on Monday morning over what appear to be business rivalries, according to police.

Police said they were notified at around 3.10am of a large fire at a bus depot belonging to Kapnos and Sons Transport on Eleftheria Avenue in Aradippou.

The fire service scrambled to the scene and put out the flames but not before they destroyed eight buses, one small one, worth some €300,000. The vehicles were insured.

The scene was cordoned off and police and fire service experts carried out a search to find out leads that could lead them to the culprits.

The area was covered by security cameras whose footage the investigators collected.

“Preliminary examination of the scene showed that the fire had been set deliberately,” police spokesman Christos Andreou said. “The investigation is mainly focusing on the complainant’s professional environment.”

The company said the buses were intended for use as part of the new public transport system if its bid were successful. The government has not yet announced which companies have won the concession.

The company, which currently operates the airport shuttle service, said the perpetrators’ objective was to hurt it because it has been successful.

It said it expected police to resolve the case quickly and bring those responsible before justice.

The airport shuttle operations were not affected in any way, the company said.

Eight companies, including six from Cyprus and two that include overseas firms have submitted bids as part of the government competition for the island’s new public transport system.

The transport ministry had said it would be announcing the results of the competition inside November.

The ministry said six Cypriot companies and two from overseas, or in partnership with local businesses, submitted bids for the six public transport contracts – one for each district and one linking the main towns.

Each bidder could submit a proposal for all contracts and win four but not Nicosia and Limassol together.

The ministry said it received two bids for Nicosia, two for Limassol, four for Larnaca, two for Paphos, two for Famagusta, and three for the long-distance contract.