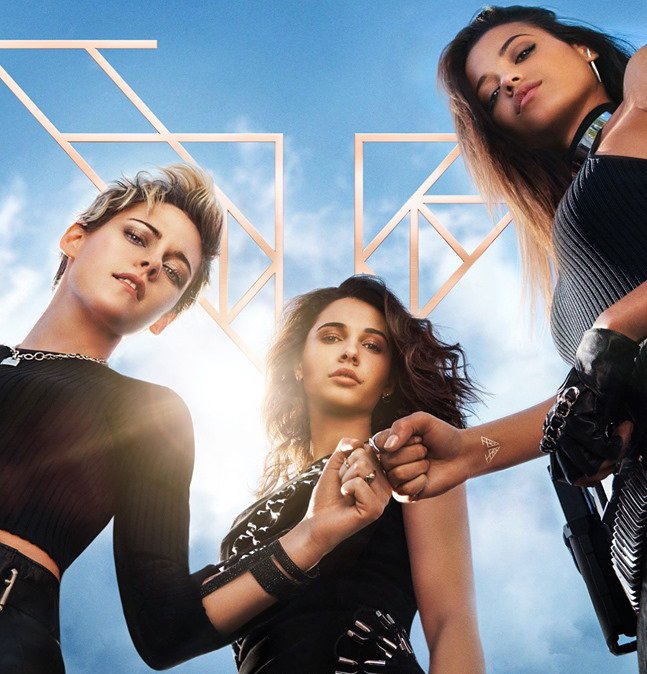 I think I speak for everyone when I say we weren’t begging for a new Charlie’s Angels. The first one, the 70s TV show, was glamorous kitsch, the second – the 2000 big-screen version, with a sequel in 2003 – was cutely post-feminist. The Angels in that one (Drew Barrymore, Cameron Diaz, Lucy Liu) giggled like schoolgirls, got in a food fight, distracted the bad guys with a song-and-dance in Tyrolean lederhosen – and that was fine, because it was their choice. They were smart and confident, but also hilarious.

Fast-forward 19 years, and it’s all gone quite serious. “I think women can do anything” is the opening line in this new version, spoken by a woman and immediately met with the standard male rejoinder (“Just because they can, doesn’t mean they should”) which in turn is immediately shot down: “I want all my options available, so I can choose for myself”. A small gender war before we even get to the opening credits – and in fact there’s also a montage of random girls being joyful and empowered (laughing, surfing, doing all the things men do) before we get to the opening credits. The new Charlie’s Angels is an act of reclamation, weaponising the trio of “lady spies” in the war for gender equality. It’s also flat and unmemorable.

“No sense of humour, that’s your problem,” says one Stewart (Patrick), a charge that’s belied by another: Kristen Stewart is the film’s secret weapon, bringing her lazy gaze and snarky teen-rebel satire to the role of Sabina, Angel #1. Watching the ironic kick she gets out of saying “The coast is clear” into a walkie-talkie is almost as priceless as her eloquent shrug – roughly translating as ‘I dunno, I mean, whatever’ – when asked “Is that a stolen car?”. She’s basically playing Bill Murray in Ghostbusters, in the central trio but not really of it (there are two Angels instead of the regulation three, but the numbers are made up by a whistleblower they’re protecting). Alas, the rest of the film gives her much less support than Murray got in Ghostbusters – though Naomi Scott is another bright spot as the whistleblower/hacker, alternately thrilled and alarmed by her initiation into the world of Angels.

Scott and K. Stewart only go so far, however. The previous Charlie’s Angels was directed by McG in a hyperactive, split-screen-and-freeze-frame style which added to the general exuberance – but writer/director/co-star Elizabeth Banks has very few visual ideas, and her attempts at high spirits seem as strained as a well-meaning mum’s at a teenage party (the low point is probably the sad little montage when a caption for ‘Istanbul’ is presented in various fonts and colours). Plot is irrelevant, of course – something about a faulty product being covered up by a greedy corporation – but plotting is not, and the plotting is standard-issue here. There’s a knock-down fight with a glowering baddie, followed by a car chase with machine guns mounted on both cars. We’ve been here before.

Scene by scene, Charlie’s Angels grows tired. Stewart tries hard (both Stewarts try, in fact), but the lines don’t always suit her – not to mention a disastrous bit when Sabina bonds with initial frenemy Jane, Angel #2 (played by Ella Balinska), in a soppy-sentimental style that brings the film down even further. A random back-and-forth about old movies (occasioned by a mention of Birdman of Alcatraz) seems to come out of nowhere. Sabina disguises herself as a jockey, a hotel maid and a dancer – but there’s no real joy in the disguises, as there was in that Tyrolean lederhosen.

Bottom line? Charlie’s Angels is a fluffy property that should really be played for comedy, not a leaden combination of action and po-faced feminism. To be fair, the film is a comedy, or at least it’s light-hearted – but its soul isn’t light, it feels heavy and machine-tooled, and doesn’t raise the spirits as it should. In the end, it may work best as a testament of How Women Feel in 2019 – the seething anger at obnoxious bosses who do all the talking, the glimpse of sisterhood at the very end, the snappy assertion that women are just as good as men at being action heroes, in fact they’re better (it takes an extra seven seconds for a girl to be perceived as a threat, apparently), the rather quixotic pining for a perfect bloke who’ll anticipate their every need or, failing that, a “handsome nerd” who’ll be klutzy and adorable. One such handsome nerd does appear, Jane being the flirty one – and he asks for her number at the end (spoiler!), but Angels are as badass about giving out their numbers as they are about everything else. “I’ll find you,” smiles Jane. You go, girl.

Central Bank calls on employees to be patient and polite