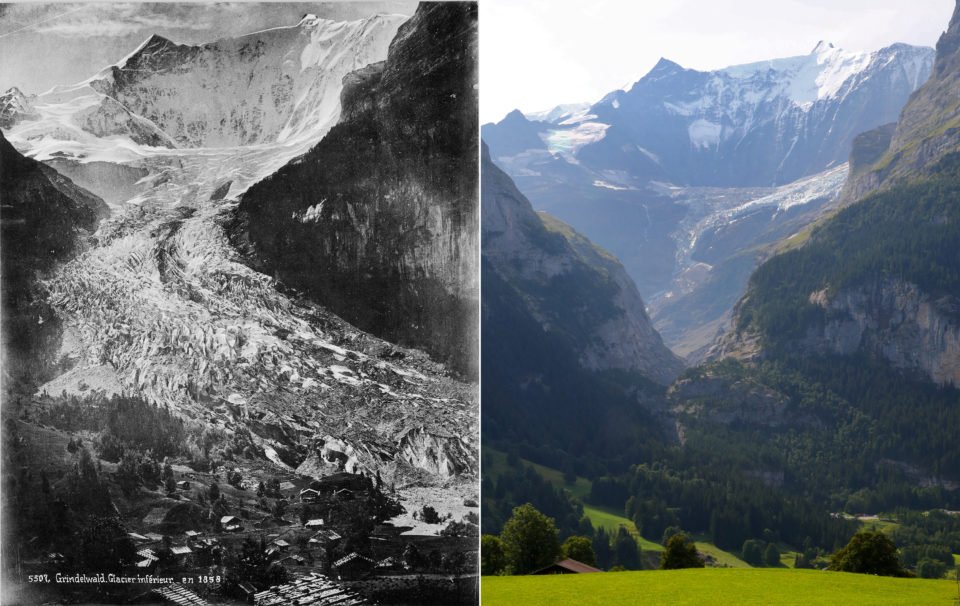 A combination picture shows the Lower Grindelwald Glacier seen in Grindelwald, Switzerland in 1865 (L) and in 2019 (R)

Greenhouse gases in the atmosphere hit a new record in 2018, exceeding the average yearly increase of the last decade and reinforcing increasingly damaging weather patterns, the World Meteorological Organisation (WMO) said on Monday.

The UN agency’s Greenhouse Gas Bulletin is one of a series of studies to be published ahead of a UN climate change summit being held in Madrid next week, and is expected to guide discussions there. It measures the atmospheric concentration of the gases responsible for global warming, rather than emissions.

“There is no sign of a slowdown, let alone a decline, in greenhouse gases’ concentration in the atmosphere – despite all the commitments under the Paris Agreement on Climate Change,” said WMO Secretary-General Petteri Taalas.

“This continuing long-term trend means that future generations will be confronted with increasingly severe impacts of climate change, including rising temperatures, more extreme weather, water stress, sea level rise and disruption to marine and land ecosystems,” said a summary of the report.

The concentration of carbon dioxide, a product of burning fossil fuels that is the biggest contributor to global warming, surged from 405.5 parts per million in 2017 to 407.8 ppm in 2018, exceeding the average annual increase of 2.06 ppm in 2005-2015, the WMO report said.

Irrespective of future policy, carbon dioxide stays in the atmosphere for centuries, locking in warming trends.

“It is worth recalling that the last time the Earth experienced a comparable concentration of CO2 was 3-5 million years ago,” Taalas said.

“MORE HOPEFUL THAN I USED TO BE”

The annual increase in methane – a greenhouse gas that is more potent than CO2 but dissipates faster – was the highest since 1998, said the report, which includes data from dozens of sites as well as naval and aerial measurements.

For nitrous oxide, which helps to erode the atmosphere’s ozone layer and expose humans to harmful ultraviolet rays, it was the biggest increase ever recorded.

Asked about the Madrid talks, which begin on December 2, Taalas said there were some grounds for optimism.

“What is good news is the visibility of these issues is higher than ever,” he told journalists. “So, personally, I’m more hopeful than I used to be 10 years ago, but of course we have to speed up the process.”

Last week, a report co-authored by UNEP showed that major fossil fuel producers are set to bust global environmental goals with their coal, oil and gas extraction in the next decade.

Later on Monday, a majority of European Union lawmakers were hoping to symbolically declare a “climate emergency” during a debate on the Madrid conference, to increase pressure on the incoming EU executive to take a stronger leading role in the fight against climate change.