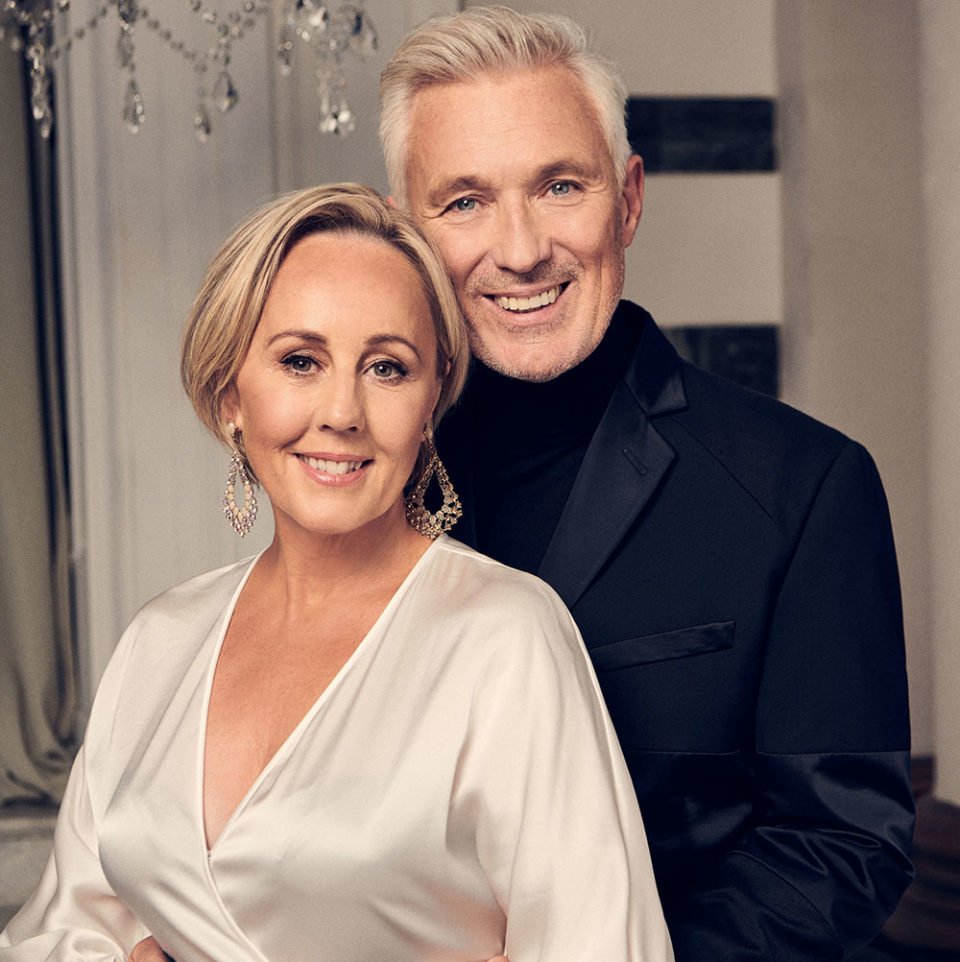 After more than 30 years of marriage, ex-EastEnders and Spandau Ballet star Martin Kemp and former Wham! backing singer Shirlie have released their first joint album. They tell Lucy Mapstone why it took them so long

SHIRLIE Kemp can’t quite get her head around the constant focus on her marriage to Martin, considered one of the longest-lasting showbiz unions of all time.

“This is just my life, and this is what I want and I’m not doing it as a competition to other people.”

She adds: “I don’t think all relationships should be all the way through your life, but Martin and I do want our relationship still, so it just feels normal.”

The former Wham! backing singer and Pepsi & Shirlie star tied the knot with the Spandau Ballet bassist more than 30 years ago, in 1988, after being introduced through mutual friend George Michael, before going on to have two children together.

But it may come as a surprise to some that they have never recorded music together over the past three-and-a-bit decades – until now.

The couple have finally joined forces to release a swing album of love songs – including classics such as Ain’t That A Kick In The Head, Fly Me To The Moon and The Way You Look Tonight – which they say represent their romance.

But why did it take so long for it to actually happen?

“It’s really nice that we haven’t done it before now because this whole thing is brand new, it’s so late-on for us,” Martin, 58, explains.

“The thing I didn’t like about being in a band was the chase up the charts, worrying what number you were and worrying what people thought of it. This is not about the charts anymore, which is such a nice thing for us.”

The couple had never even considered doing an album together before, and Shirlie, 57, admits to feeling nervous about getting back into the recording studio.

“I had never, ever thought about doing this. I’d kind of given up singing really,” she reveals.

“I never saw myself going back into this industry or putting myself out there, and even when Martin suggested that maybe I’d go and sing a song with him – because that’s how it started, I was just going to sing one song – I was still a bit reluctant.

“I didn’t want it to look cheesy. I was scared, thinking, ‘Is that going to look really corny if we work together?’

“But after the first song… I’d never done something so quickly that felt so right, and I realised how happy I felt singing again. And then it just unravelled itself, and there was no marketing ploy from us or an, ‘Ooh, let’s go and do an album just for the sake it’ moment.

“We did it because I actually really enjoyed doing it.”

She also reveals that she was nudged into it by son Roman when she wasn’t feeling too sure.

“So when we played Roman our recording at home, he looked at us and went, ‘Oh my God guys, this is so much better than I thought it was going to be – you’ve got to do this!’”

Shirlie says that she listens to Roman and their daughter Harleymoon, “because they’re current, they’re young and they know what’s going on, and their encouragement and approval of what we were doing meant a lot to me.”

“It’d mean more if he plays us on the radio though,” quips ex-EastEnders star Martin, referring to their son’s job as a Capital FM host.

Roman, one of the stars in this year’s I’m A Celebrity… Get Me Out Of Here!, and Harleymoon were both integral to the album being made, making it a real family affair.

“My daughter not only wrote two songs, but she photographed us for the album cover, she made all the video and she filmed the whole making of the album,” Shirlie reveals.

“She has a media company that makes TV commercials, so she did that side of it for us too,” adds Martin proudly.

For someone who had such a successful career back in the day – both as a backing singer for close friends George Michael and Andrew Ridgeley in Wham!, and then with Helen ‘Pepsi’ DeMacque in pop duo Pepsi & Shirlie – Shirlie is refreshingly honest about her hesitation to get back into music.

Asked why that is, she explains that music stardom and all that came with it was not part of her plan.

“Wham! kind of came about because I was just a friend of George and Andrew’s and before the band even started we were just making up these little dance routines and messing around with music.

“Wham! happened so quickly, I didn’t even consider my life going that way, and then it was hard work. You’re just on planes travelling all the time, and when Wham! split up I went straight into doing it with Pepsi, and once again we’re on planes, we’re flying to Japan and so on, and you kind of lose a bit of life.

“As much as it looked from the outside that, ‘Ooh, you’re jetting off here, there and everywhere!’… I missed Martin.”

Shirlie pretty much retired from music after the birth of Harleymoon in 1989, and she says: “I was exhausted of it all, and that whole celebrity thing.

“I wasn’t comfortable with that, and once I’d had my daughter I was so happy to be at home with her knowing that Martin was still going out working.

“I felt so secure because I didn’t have to think, ‘Where am I going to be sent next week?’.

“It was very intense, the Wham! years and the Pepsi & Shirlie years, that I had to get off it for a while, but I don’t regret any of it. I loved the fact that I did it.

“I feel like this new album has come about because I didn’t chase anything.

“It feels like a bit of a gift because, as I said, it wasn’t a business plan… it just kind of happened quite quickly.”

Poking fun at her long time away from singing and joking that she was a little bit rusty, Martin says: “I did have to scrape her off a little bit and put a bit of WD-40 on her!”

But, as his long-term love laughs alongside him good-naturedly, he adds: “No, Shirlie sounds great on the album.

“She should really be so proud of herself.”

Central Bank calls on employees to be patient and polite