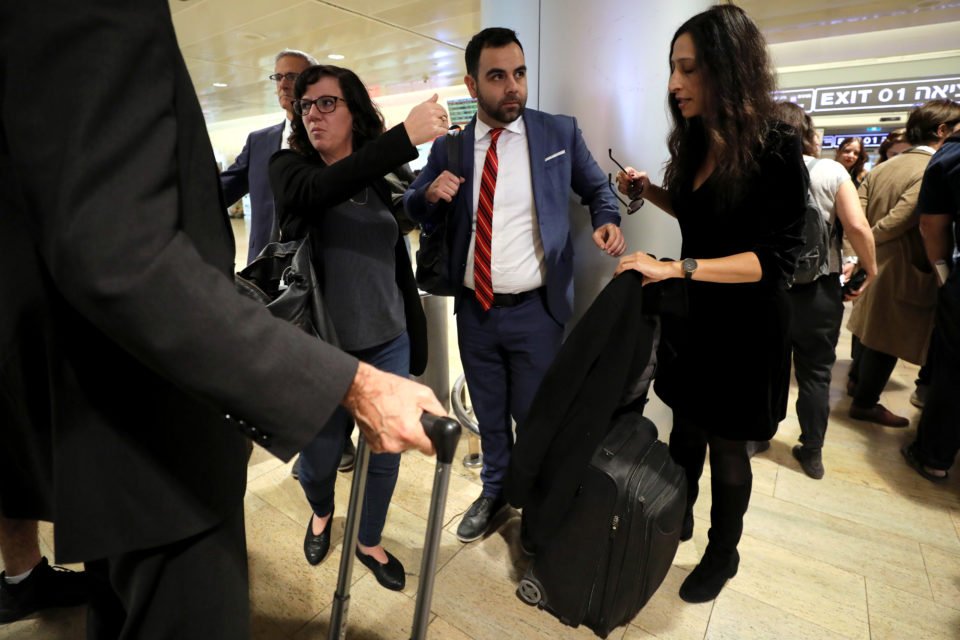 Omar Shakir, a US citizen representing New York-based Human Rights Watch (HRW) in Israel and the Palestinian territories, stands at the terminal before departing Israel at Ben Gurion International Airport

A Human Rights Watch (HRW) official complied with an Israeli expulsion order on Monday imposed over accusations he backs an international pro-Palestinian boycott, but said the edict would only encourage rights abuses.

HRW and Omar Shakir, a U.S. citizen representing the New York-based organisation in Israel and the Palestinian territories, have denied the allegations.

Three weeks ago, Israel‘s Supreme Court upheld the Interior Ministry’s refusal to renew Shakir’s work visa and ordered him to leave by Nov. 25.

The ministry said Shakir actively supports the Boycott, Divestment and Sanctions (BDS) movement. Israeli law allows for authorities to ban the entry of foreign citizens who call for a boycott of Israel.

Shakir denies that his HRW work and pro-Palestinian statements he made before being appointed to the HRW post in 2016 constitute active support for BDS.

“If the Israeli government can deport somebody documenting rights abuses without facing consequences, how can we ever stop rights abuses?” Shakir said at a news conference in Jerusalem on Monday before heading to the airport for his departure.

Israel‘s Ministry of Strategic Affairs, which is tasked with combating the BDS movement, welcomed Shakir’s removal, calling him “an active BDS propagator”.

“Israel, like any sane country, has the right to decide who is given the freedom to enter and work within its borders,” the ministry said in a statement.

Shakir will continue in his role from neighbouring Jordan, relying on a network of researchers in Israel, the West Bank and Gaza to conduct field work, HRW’s executive director Kenneth Roth said at the news conference.

“There’s no point in replacing Omar because our next researcher would have the same problem,” Roth said.

“If Israel can pick our researcher, Israel can preclude certain topics. Imagine what other governments will do. China will say we cannot monitor Xinjiang (detention camps). Saudi Arabia will say that we leave Yemen alone,” he said.

Israel, Roth said, had joined the ranks of countries such as Iran and Egypt in blocking access for HRW officials.

Roth said Shakir was being punished in part for HRW’s work calling for businesses active in Israel‘s settlements in the occupied West Bank to cease their activities.

The United Nations considers settlements Israel built on land it captured in the 1967 Middle East as illegal. Israel disputes this and cites historical and biblical links to the territory, which Palestinians seek for an independent state.

HRW says it does not support boycotts of Israel but does defend the right of activists to engage in such non-violent protests.