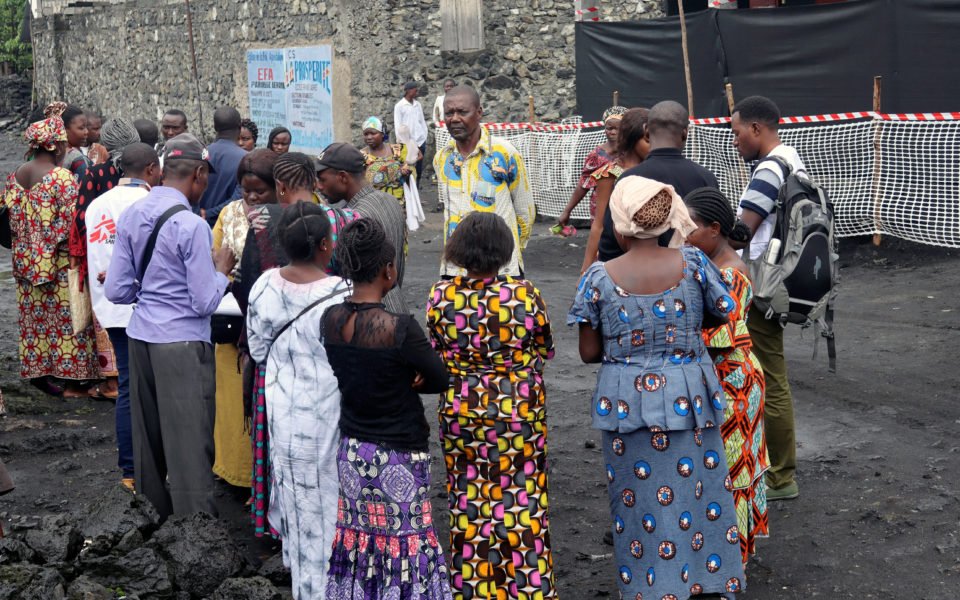 Congolese residents gather around Medecins Sans Frontieres (MSF) health workers as they prepare the introduction of the second ebola vaccine.

Militia fighters in eastern Congo killed four people and injured several others in attacks on two Ebola response centres on Thursday, in what responders described as a serious setback to efforts to contain the epidemic.

Violence and unrest have hampered the health authorities’ response to the second worst Ebola outbreak on record, which has killed 2,199 people since it was announced in August 2018.

Mai Mai militia fighters and local residents have attacked health facilities, sometimes because they believe Ebola does not exist, in other cases because of resentment that they have not benefited from the influx of donor funding.

In the latest such violence, Mai Mai fighters simultaneously attacked Ebola centres in Mangina in North Kivu and Byakoto in Ituri, according to Jean-Jacques Muyembe, head of Ebola response for the Democratic Republic of Congo.

“It is a blow to the Ebola response because we were eradicating the disease. These attacks are challenging the efforts to date,” Muyembe told Reuters.

The World Health Organization said the dead included a member of a vaccination team, two drivers and a police officer. It said none of its own staff were killed and that most of the five people injured were from Congo’s Ministry of Health.

Health workers have lost access to the remaining strongholds of the virus in recent weeks due to deteriorating security, said Mike Ryan, head of the WHO’s emergencies programme, describing the latest attack as the deadliest yet.

“The interruption of outbreak response has led to a decrease in over 50% of alerts, a collapse in vaccination, a decrease in contact tracing,” he told a news conference.

“Ebola was retreating and now it is likely to resurge,” he said.

New infections have been on the decline since August, with just 70 cases identified in all of October, medical charity Medecins Sans Frontieres said on Monday.

Thursday’s attacks came amid a spate of massacres committed by suspected Islamist rebels in the region, who are believed to have killed at least 80 people in the past month, according to U.N. figures.

This week at least four people were also killed during protests fuelled by anger at the perceived failure of the army and U.N. peacekeepers to protect civilians from the Islamist Allied Democratic Forces (ADF).

As a result, the WHO and the U.N. Children’s Fund (UNICEF) on Tuesday evacuated dozens of their staff working on the Ebola epidemic from the town of Beni. WHO staff have now been relocated from Byakoto also, Ryan said.

“I will not be intimidated” by police, says Phedonos