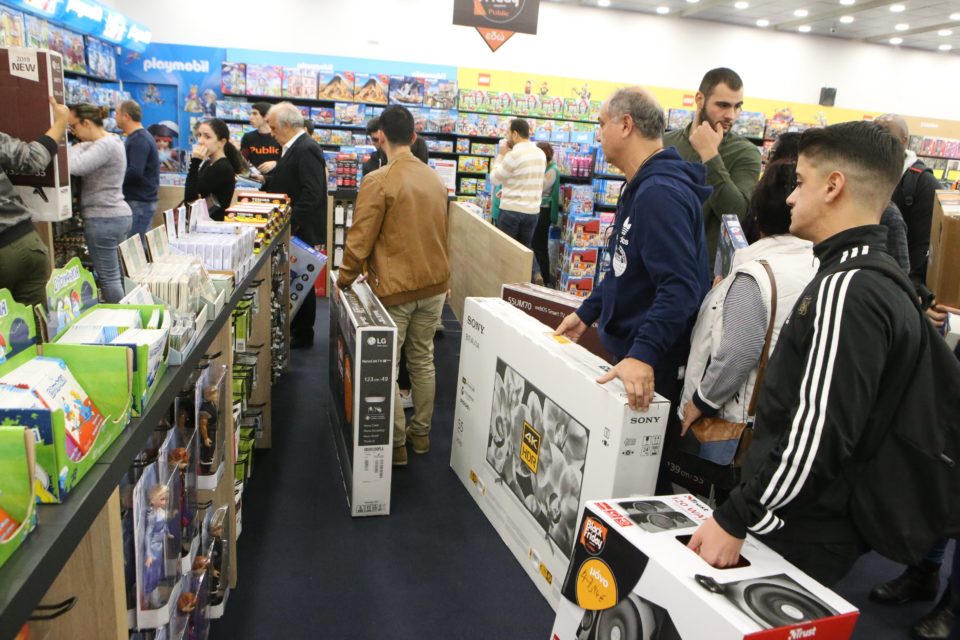 Queues started early at Public at the Mall of Cyprus, Nicosia (Christos Theodorides)

People were seen rushing to big electronic shops early on Friday morning to make the most of Black Friday and its promises of special offers.

While a rush on the big shops and the malls was expected, this year the concept has expanded to other areas. Smaller shops in the town centres said they too would be offering discounts, a number of them for the first time. There are also discounts on furniture, local hotel rooms and even cheaper rates for those who want to post job offers online.

By lunchtime, long queues of cars were seen snarling up roads near shopping hotspots such as the Mall of Cyprus and Stephanis on Athalassa avenue in Nicosia.

Large queues were seen at the checkpoints as Turkish Cypriots also shopped. Someone crossing at around 10am, when they are usually only a handful of cars crossing from the north reported a queue of people backed up waiting to cross of around 1km.

Even those who did their shopping early had to battle the crowds.

“When I came in the morning there was a 20-metre long line for the checkout, it was absolutely packed inside the store and in the parking area. There were extra parking attendants to help people park,” said Nicos Nicolaou who had gone to Stephanis to buy his daughter a new phone for her birthday next week.

Public at the Mall of Cyprus was equally packed. The electronics store opened two hours earlier than usual to accommodate the rush. All offers were available only in the shop which added to the crowds. Online deals are waiting for the e-sale on Cyber Monday.

The other big electronics shop, Bionic, was a little quieter. Marketing manager Demetris Panides told the Cyprus Mail this was because their deals had been going on all week.

“Our sales started from November 20 and will last until December 2, offering customers up to 70 per cent discount on some products,” he said. “Therefore we were busy throughout the week not just today.”

A MIX FM live link and a Shark promotion outside the store helped customers to get in the mood for shopping.

“I shop every year on Black Friday, taking advantage of the sales to do my Christmas shopping. I already bought a smart watch for a friend,” said Elena Olympiou, 25. “I think the earlier you start your shopping the better because you can take advantage of the offers.”

Michalis, a 45-year-old father who came to shop for his two sons, said: “We needed to get a monitor and today we saved €100 on it.”

While 28-year-old Maria Stylianou said she got a mouse for just 6, “I don’t know how much it was before, but that’s cheap!”

Other shoppers were less impressed. “We wanted to buy a TV but the prices are the same, you will not see a big difference. It’s not a problem. but in America the sales are really good,” said George, 40, who had come to shop with his 20-year-old son.

Black Friday is celebrated every year on the last Friday of November, a tradition which started in the USA before spreading to Europe.

Many shops expand their opening hours to accommodate shoppers, while consumers who prefer the comfort of their own home can choose to shop during Cyber Monday, when retailers offer exclusive, website-only deals.

Get festive at Christmas markets