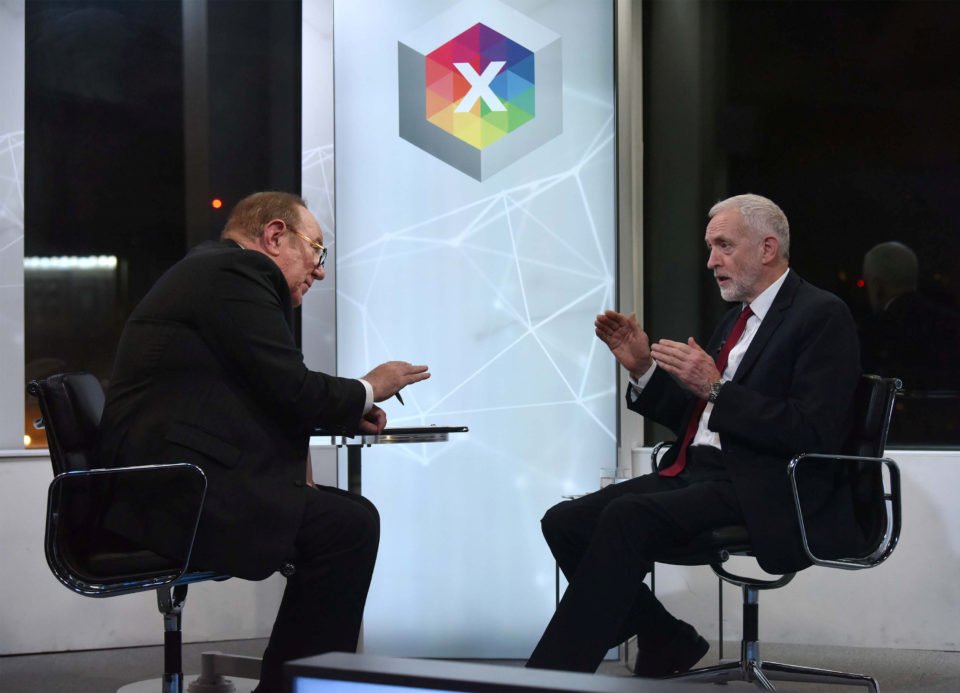 Britain's opposition Labour Party leader Jeremy Corbyn appears on BBC TV's The Andrew Neil Interviews in London, Britain, November 26, 2019. Jeff Overs/BBC/Handout via REUTERS ATTENTION EDITORS - THIS IMAGE HAS BEEN SUPPLIED BY A THIRD PARTY. NO RESALES. NO ARCHIVES. NOT FOR USE MORE THAN 21 DAYS AFTER ISSUE.

Nicola Sturgeon, the Scottish National Party leader and First Minister of Scotland, is having a good campaign in the UK election. She comes across as though she knows what she is doing, and although opinion polls still show the Conservatives ahead, a Labour–SNP majority is beginning to glimmer on the horizon.

The Labour party is still struggling with allegations of anti-Semitism, which is ironic for a party that was the natural home of many in the Jewish community.

And it was daft of Jeremy Corbyn in his interview with Andrew Neil on the BBC last week not to apologise to the Jewish community and be done with it.

He is the leader of the Labour party and a seasoned campaigner and he must know that saying the Labour party is opposed to all forms of racism instead of apologising for the anti-Semitism that thrived under his watch, would not cut it. In electoral terms it is not cancelled out by intolerance shown to the Muslim community in the Conservative party because that’s the way it is. And just when the terrorism barometer was going down, a convicted terrorist with a Muslim name out of prison on licence, knives two people dead at London Bridge and tars the whole community with the same brush in the eyes of the electorate.

On the positive side, Jeremy Corbyn’s decision to stay neutral in the referendum the Labour party promised on Brexit if it wins is sensible and pragmatic, and the criticism he received over this is hypocritical and unintelligent.

Like the rest of Britain, the Labour party is split over Brexit, so it makes sense for its leader to sit on the fence. As he argued, by remaining neutral he would be better placed to carry out the country’s wishes whatever the result of a second referendum, which is what David Cameron should have done in the 2016 referendum campaign when he was prime minister.

Brexit is not a moral choice. It is not a choice between good and bad or anything in between. It is a political choice upon which good people can differ and stay in the same party. According to Harold Wilson, the Labour premier in the 1960s, the Labour party is a broad church. It had room for people like Dennis Healey who was known as the member for Nato and Dennis Skinner who was known as the beast of Bolsover for his extreme left-wing views.

Jeremy Corbyn’s other problem is that he does not look like a prime minister, but then neither did Clement Atlee compared to Winston Churchill or Harold Wilson compared to Harold Macmillan.

He hopes that Labour’s 2019 election manifesto will do the trick for him. After ten years of stale capitalism it offers people a choice of compassionate socialism of the type Corbyn has championed all his life.

The state will go on a spending spree if Labour wins which it regards as a necessary corrective after years of austerity that has decimated the poor and those left behind. Provided it does not kill the goose that lays golden eggs, a little bit of compassionate socialism will do the country a world of good.

This has not been lost on the Conservatives although they would prefer to call it compassionate capitalism. They too promise to spend more, particularly on the National Health Service. Otherwise, the Conservatives want to narrow the election to a single mantra: to get Brexit done.

Boris Johnson, the Conservative leader, was supposed to be a good campaigner but any fool can see that he just mouths meaningless generalities in a posh accent; he has not even mastered the deal he negotiated with the EU.

Having called the election to get Brexit done, Johnson’s minders know it is his to lose.

They know that he will sound ridiculous if he agrees to be grilled forensically by Andrew Neil whose customary eye for detail and rasping Scottish accent would show Johnson up as lacking serious purpose and lose the Conservatives votes they could ill afford at this stage of the campaign.

If the Conservatives mantra is to get Brexit done, the Liberal Democrats is to get it undone without any regard for all the people who voted to leave in 2016. They latched on to championing remaining in the EU on the simple calculation that those who voted remain would vote Liberal Democrat.

If only it were that simple. It was a miscalculation and the opinion polls do not show any significant swing to the LibDems.

In 1981 the leader of the Liberals, David Steel, told Liberal party candidates and handful of MPs to go back to their constituencies and prepare for government.

Jo Swinson, the Liberal Democrats’ current leader sounded equally optimistic when she started talking about what she would do when she becomes prime minister when the election was first called, but wisely recanted.

They are going to do better than in 2017 and have made some clever electoral pacts with pro remain parties like the Greens and others. But unlike the Scottish National Party the Liberal Democrats would not be prepared to support a Labour administration, which is an untenable position for a party that wishes to revoke the Brexit process.

The Conservative government called this election because it needed an overall majority to vote for its deal to leave the EU. Most of the other political parties, including the Democratic Unionist Party in Northern Ireland, are having second thoughts about Brexit primarily on account of its deleterious effects on the unity of the kingdom. But as in 2016 the joker in the pack is Nigel Farage of the Brexit party.

He has unilaterally agreed not to fight the Conservatives in constituencies they currently hold. So what will determine this election is whether Nigel Farage can steal votes from the Labour party in target seats it needs to win and hand those seats over to the Conservatives.

Our View: Local government reform welcome, but it could have gone further