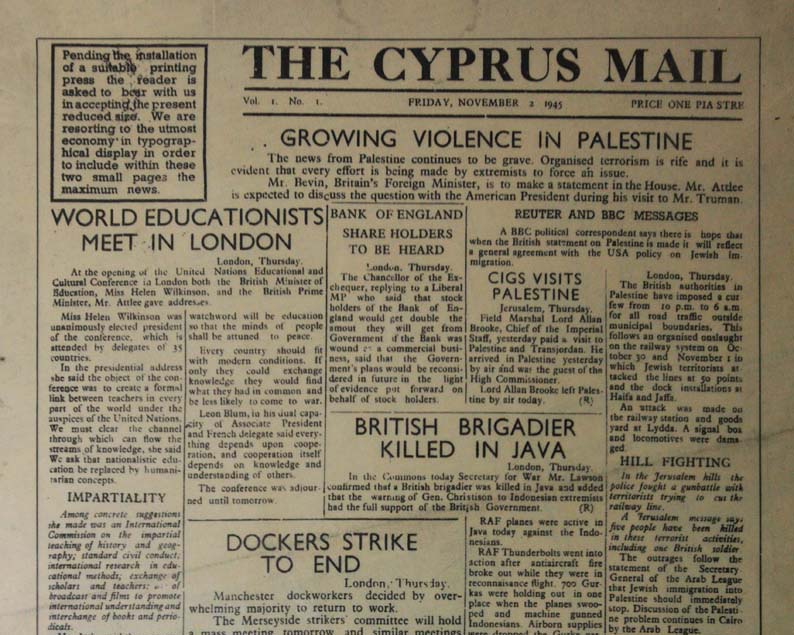 Cyprus Mail: reporting for three-quarters of a century

The Cyprus Mail has just entered its 75th year. When the very first issue of the island’s oldest newspaper was printed on November 2, 1945 the Second World War had just ended and a major concern for the fledgling publication was paper rationing.

Three quarters of a century later, the challenges remain, this time caused by the internet and the all-conquering advance of digital technology. Unlike so many newspapers worldwide which have folded in defeat, the Cyprus Mail still produces a high-quality print edition, available six days a week.

But the Cyprus Mail has also met the digital age challenge head-on with its website and phone app. It boasts the top SEO for news and information on Cyprus, a reflection of the high regard in which it is held by its readers worldwide.

With a proud history spanning three quarters of a century, the Cyprus Mail has become a well-known news brand known for its reliability and objectivity.

That the Cyprus Mail can continue to operate so successfully in print and online is down to its new owner, prominent Limassol lawyer Andreas Neocleous who recognised its importance and potential. New investment has seen the expansion of the news room and the re-design/upgrade of the print and digital platforms, which are now providing round-the-clock news coverage and regular updates. Revived and re-energised, the newspaper can continue its mission of enriching unique content, but also expand the breadth of its coverage.

Before the end of the year the operation will move to new, modern offices on Lemesos Avenue in Nicosia, specially designed for a modern news operation.

Under the new ownership, the Cyprus Mail will be run by an editorial board, consisting of distinguished personalities from Cyprus and abroad. The newly formed editorial board’s mission is to better define the future strategy and philosophy of the newspaper. The chairman of the board is Ioannis Kasoulides, a former Foreign Minister of Cyprus and ex-MEP. Other members include: Roelf Meyer, the South African government’s chief negotiator in the talks that ended apartheid and member of the Nelson Mandela unity government; Elie Hatem, a professor of international relations and law; Giorgos Nicolaou, former judge at the European Court of Human Rights and the Cyprus Supreme Court; Tasos Telloglu, a Greece-based investigative journalist and television presenter, and Kyriacos Iacovides, managing editor of the Cyprus Mail. The editorial board is independent of the newspaper’s editorial staff.

The Cyprus Mail’s first major story in the mid to late 1940s was the detention of thousands of Jewish refugees in camps in Cyprus. Escaping war-ravaged Europe, they had attempted to run the British blockade of Palestine and were interned here until the creation of the state of Israel in May 1948. In this way, Cyprus became part of the never-ending convulsions in the Middle East.

It is therefore fitting that to launch its 75th anniversary celebrations, the Cyprus Mail is organising a symposium on Syria, the Middle East’s latest deadly fault line. ‘The Syrian Crisis and its Consequences in our Region’ on December 6 will see prominent political leaders and personalities from different corners of the world provide their insights into the issues at stake and offer ideas on how long-term stability can be achieved in the region. This event is by invitation only.

The Syrian Crisis and its Consequences in our Region

The symposium on The Syrian Crisis and its Consequences in our Region, brings together a diverse group of speakers from different corners of the world, each with their own expertise and ideas on the issues facing the war-ravaged country and the way ahead.

Can long-term stability be achieved and how? Can there be a compromise that keeps all parties happy? How will the new power balances shape up and how will they affect our region? Has Russia taken over the role of the US in the Middle East? Is there a role for the EU in the rebuilding of the country?

These are a few of the questions the nine speakers will try to answer, some of whom – such as the former President of Lebanon, Amine Gemayel – can speak on behalf of a country that will be directly affected by the course of events in Syria. The same is true of Somar Al-Assad, the geopolitician nephew of the late Hafez Al-Assad, who will speak about the reconstruction of Syria.

Rosine Ghawji, president of Women for Donald Trump will explain President Trump’s policy on Syria and the Middle East and what its objectives are, while Russian political scientist Konstantin Truevstev will explore how a Syrian peace will influence security in the Middle East and the Eastern Mediterranean.

For the EU, the war in Syria caused an immigration crisis, which was brought under control through an agreement with Turkey where some three million Syrian refugees are currently staying. France’s role in the peace process in Syria, which will be the subject of the speech by Jean-Christophe Mitterrand, former political advisor to the late President Francois Mitterrand, will offer a European perspective.

Former United Arab Emirates ambassador to Russia and France, Omar Ghobash, will present his country’s role in promoting peace and stability in Syria, while Roelf Meyer, a former minister in South Africa, will talk about the key elements of successful transitions in conflict situations drawing from his personal experience as the chief negotiator of the South African government in the negotiations to end apartheid.

Professor of international relations law, Elie Hatem, a former advisor of the late Boutros Boutros-Ghali will look at the effects of the war in Syria on world order. Finally, former foreign minister, Ioannis Kasoulides, chairman of the symposium, will speak about Cyprus’ role in the Syrian peace process, after which participants will be invited to join the discussion.

The symposium will be held on Friday, December 6, at the Amara Hotel in Limassol and starts at 3.30pm.

Sandro to represent Cyprus at Eurovision 2020