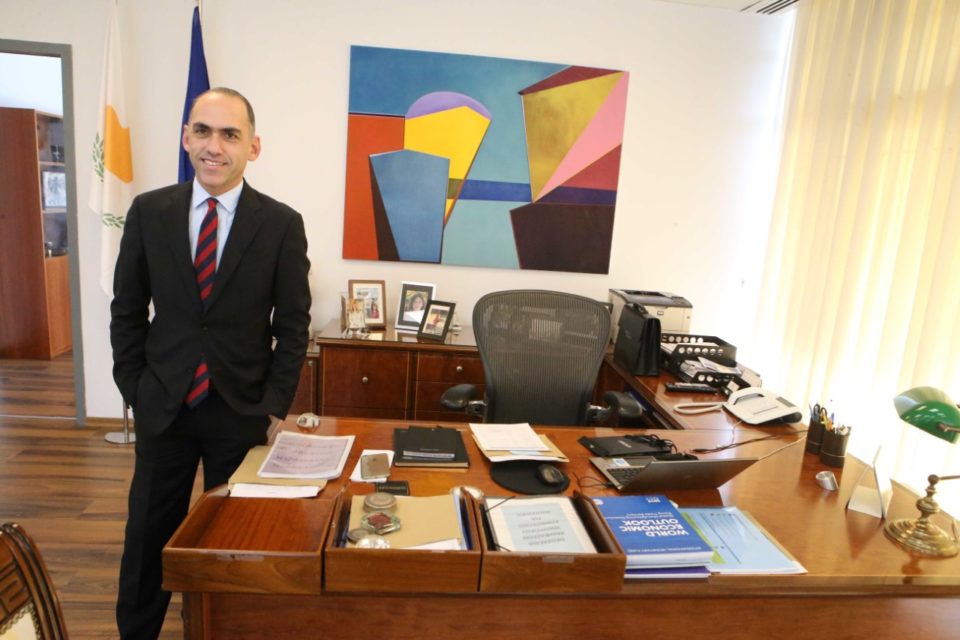 President Nicos Anastasiades on Sunday praised outgoing Finance Minister Harris Georgiades for his work in the position, which led the economy “from the depths of the crisis to growth”.

“Commenting on the very positive performance of the economy and the steady growth path, I take this opportunity to reiterate my warm thanks to outgoing Finance Minister Haris Georgiades, one of my closest associates, for the great work he has done,” he said in a written statement.

In his seven years as finance minister Harris Georgiades said on Sunday he did not promote the privatisation of semi government bodies as he should have.

In an interview with Phileleftheros, he said in the case of Cyta he said there was “dogmatic denial” to get on board.

But he said he will leave things easier for his successor. “I leave the largest surplus ever recorded by public finances in the history of the Republic of Cyprus. Surplus is the margin of safety that will allow the new minister to function, handle situations and pursue policy,” he said.Last week Georgiades said he will not be in the position of minister to present the 2020 budget to the House on Friday.

Georgiades, who took on the ministry at the beginning of the financial crisis in 2013 said the role had turned into a life’s mission. “The responsibility was huge,” he said.

And to arrive at today’s stability took sacrifices by many. “It took strenuous efforts to get back on our feet. Difficult, unpopular decisions needed to be made and someone had to take them. Today I think we have reached a point that allows me to complete my role”.

When it was suggested his critics would define his time in office as one that saw the collapse of Cyprus Airways and the Co-op bank, Georgiades said his critics were the same people who abused the two organisations.

“Cyprus Airways was seriously overstaffed and operated with waste and criminal misconduct,” the minister said. Once the island joined the EU, the airline was no longer able to compete without the government pouring in funds, which was deemed illegal by Europe.

But “the closure of Cyprus Airways led to the operation of new airlines which helped in the massive increase in tourist numbers to the island. Amongst these is the new Cyprus Airways, a completely private company that competes against other airlines with no support from the government”.

The same principle applies to the Co-op, said, where for year there was a lack of control and abuse of the system. The unchecked issuing of loans led the Co-op to a dead end, Georgiades said.

Bank of England’s Carney to become U.N. envoy on climate action and finance