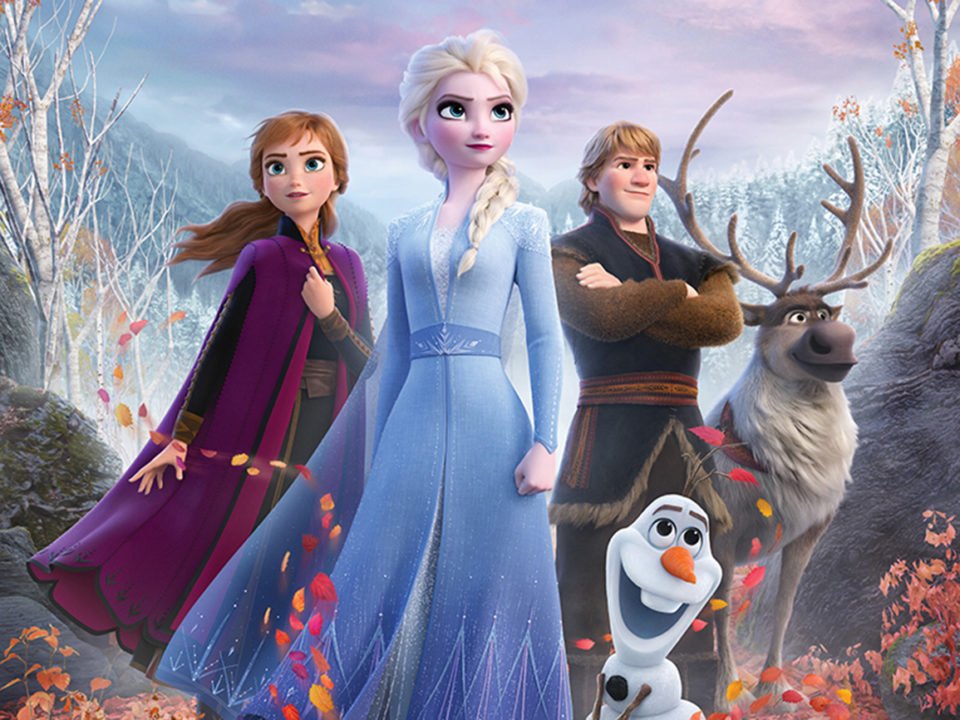 A lot of films make a lot of money – especially these days, and especially Disney cartoons – but Frozen in 2013 was still a shock, making $1.2 billion worldwide on the back of nothing very much, just a Disney-princess plot and a general resemblance to a Hans Christian Andersen story. Frozen II is also certain to make a lot of money – but if so, it’ll do it on the back of Frozen, not on its own merits. “Some things never change,” goes an early song in this lesser sequel, which is true enough – but other things have changed, especially the potent emotional dynamics that made Frozen so extraordinary.

“It began with two sisters…” says Olaf the snowman (voice of Josh Gad), summarising the first movie for an audience of enchanted-forest folk – and so it did, the heart of Frozen being the relationship between princess Anna (voice of Kristen Bell) and her older sister Elsa (voice of Idina Menzel), who had magic powers and couldn’t let anyone know about them, much less approach her. Elsa was distant and remote, breaking Anna’s heart – but in fact she only wanted to protect her. It wasn’t just a Disney-princess plot but that musty old tearjerker, the love forced to hide itself away, also touching anyone who might’ve grown distant from a sibling – or just felt unable to express their affection – but still loved them deeply. Pretty grown-up stuff for a kids’ cartoon, hence perhaps that $1.2 billion.

None of that applies to Frozen II. Elsa is still quite withdrawn (“I have always been a fortress / Secrets deep inside,” she sings), and apt to shut Anna out for her own protection – but the sisters are friends now, playing charades in the palace with Olaf and reindeer-herder Kristoff (voice of Jonathan Groff), as well as allies on a magical mission, following a ghostly voice to the enchanted forest where they seek the truth about Arendelle’s past (Arendelle being the kingdom where Elsa is Queen). We were always afraid that Elsa’s powers might be too much for this world, says a wise old troll, “now we must hope they are enough”. Alas, that question is a lot more banal – and less of a question, especially in a Disney cartoon where a happy ending is guaranteed – than the previous one, which contained the heretical suggestion that Elsa’s success might in fact be her failure.

Basically, Frozen II is a film where a team of heroes goes on an adventure and things happen. Soldiers are discovered, trapped for decades, inside the forest. We meet the four Elements, including Air – the “spirit of the wind”, rustling up a tornado that sucks Sis and Sis into its vortex – and Fire, which sparks a forest fire (animated in shades of pink rather than orange, for some reason) and later turns out, counter-intuitively, to be a cute little gecko-like creature with big eyes. Secrets from the past are revealed, leaving the sisters with a burden of guilt to discharge. The guys offer comic relief, not just Olaf but also Kristoff, whose inept attempts to propose marriage to Anna embarrass even Sven the reindeer. As in Frozen (another reason why that film seemed unusual), the men come a distant second to the bond between the sisters; they call to mind that wry line spoken by a teenage boy in The Virgin Suicides, that the girls already knew about life and “our job was merely to create the noise that seemed to fascinate them”.

This is not a sequel that’ll stir fans as deeply as Frozen did. Very young kids might be bored too, especially when the plot starts to drag. “This grief has a gravity / It pulls me down,” sings Anna – and the film does indeed get bogged down, partly because the premise revolves around something (an age-old enmity between the Arendellians and another tribe, the Northuldra) that seems quite remote and irrelevant; or perhaps there’s a whole Frozen multiverse out there I don’t know about.

The film isn’t much, but I guess it’s enough. It has visual sweep and the songs, though generic, move things along (Kristoff gets a song with an entire reindeer chorus singing backing vocals); a scene with Elsa plunging through fierce ocean waves – water is a big motif in general – is exciting, and skilfully edited. Despite weaker dynamics than the original, Frozen II will probably please fans, sell some merchandise and Lego sets – and of course make a lot of money. The song is right: some things never change.

WITH THE VOICES OF Kristen Bell, Idina Menzel, Josh Gad