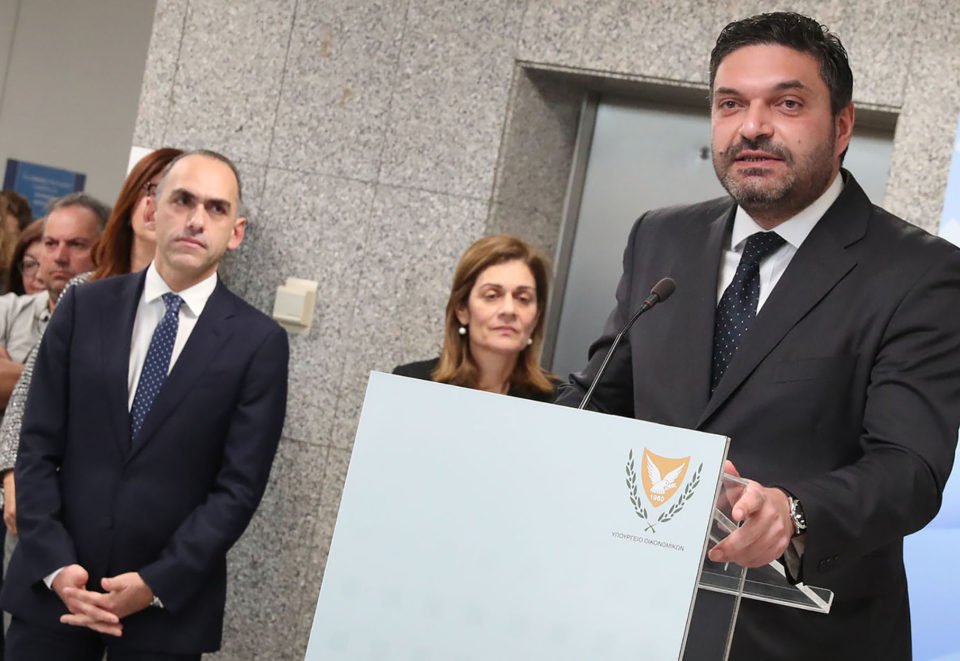 Petrides taking over the ministry of finance

New Finance Minister Constantinos Petrides said on Tuesday he was happy he was assuming the portfolio under better conditions than his predecessor some seven years ago when Cyprus was reeling from the economic collapse.

Speaking during the handover ceremony, Petrides, who moved from the interior ministry, recounted the conditions during that “tragic” period and told outgoing minister Harris Georgiades “I am very happy that conditions in which I am taking over as finance minister are very different than those when you took over.”

Growth exceeds 3 per cent, unemployment has been reduced from 17.5 per cent to 6.5 per cent and prudent management on one hand has secured the fiscal balance and allowed for the implementation of social cohesion and development policies, Petrides said.

Georgiades said his presence at the ministry was a life mission that was now completed.

Georgiades said Treasurer Rea Georgiou was again present during the handover ceremony but after welcoming him seven years ago with some nice words she informed him that the state only had enough cash to last until the end of the month.

“We faced a state of collapse and the responsibility was great,” he said.

Georgiades said he had to make some tough decisions but had never felt alone, as he paid tribute to Cypriot society and the manner it had dealt with the crisis.

“I felt there was a silent social majority that gave us power,” he said. “We tend to ignore the silent majority because it doesn’t make any noise, it doesn’t use cries and slogans, but I think Cypriot society showed unique maturity, unique calm, and it was the real protagonist in this effort.”

Before receiving the finance ministry, Petrides handed over the ministry of interior to Nicos Nouris, who was a Disy MP until Tuesday.

Nouris assured Petrides that he would continue his work with the main focus being to push through local authority reform and to resolve the migration problem.

“The interior ministry is perhaps the biggest as regards the services it provides to citizens but the hierarchy and the priorities are clear,” he said.

At this stage however, the priority was the local authority reform and resolving the migration problem that was turning into a timebomb.

New Education Minister Prodromos Prodromou pledged to continue his predecessor’s efforts for reform, resolving on the way any problems and opposition that may arise.

“Teachers are not simply our associates but the protagonists for a better future and the improvement of the public school,” Prodromou said. “We must and we want to work with them and see them lead the way to progressive changes.”

Prodromou said it was natural for teachers to have different perceptions, sensitivities, ideological orientations and political views.

“But to the ministry and the government they are all our teachers equally,” he said. “The teachers on which the state and society entrust the feature and hope of our country.”

Outgoing transport minister Vasiliki Anastasiadou outlined all the projects she had seen through during her tenure at the ministry but also voiced a grievance regarding the rumours that preceded the reshuffle.

“To me, what was stressful and difficult to digest were the rumours doing the rounds in the past few months and the frequent references to my name,” she said. “While a reshuffle is a healthy and sometimes necessary act to renew a government, the protracted rumour mill undermined the work of a minister and the government.”

Karousos, who was mayor of Ayia Napa, said the ministry had a wide range of responsibilities that significantly affected the island’s economy.

“I want to assure the president and the people that with hard and methodical work we will achieve our objectives.”