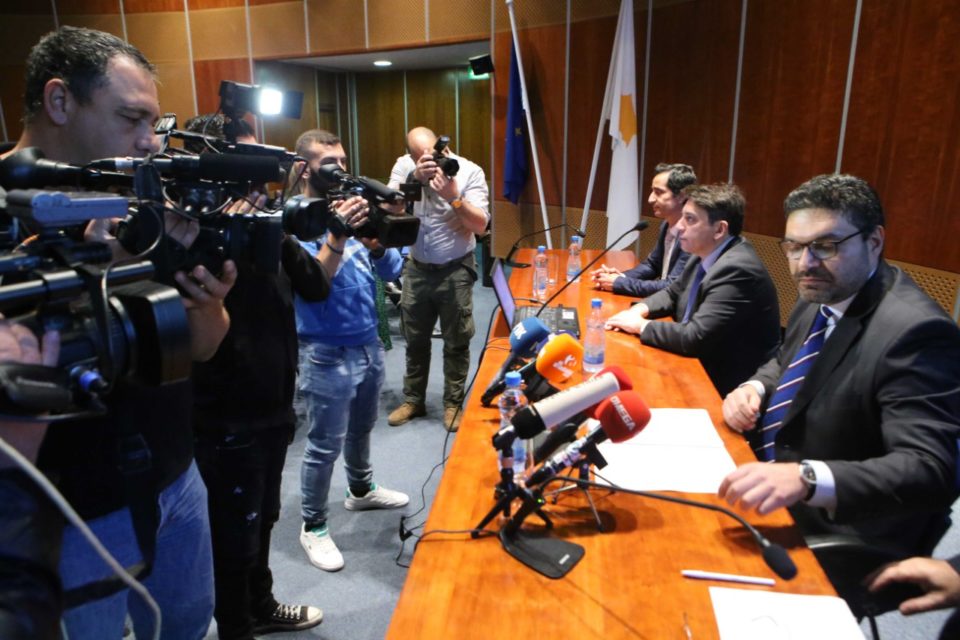 Petrides presenting the plan on Monday

The proposed mergers of municipalities and communities as part of the local government reform were greeted with a mixed response on Tuesday as some said expediencies lie behind the decision.

While some mayors welcomed the announcement on Monday by former Interior Minister Constantinos Petrides others objected largely due to objections over the partners chosen for them.

The mayors of Strovolos, Limassol, Ayios Athanasios and Latsia welcomed the move.

For Paphos Mayor Phedonas Phedonos, the proposed bill “is almost excellent”, arguing that with some minor improvements it will be ideal.

Geroskipou municipality however, expressed their disagreement with the proposal to merge with that of Paphos and the communities of Achelia, Timi and Konia and called on the interior minister to reconsider.

The municipality called for the creation of a “powerful and viable municipality in eastern Paphos,” and argued there is a better, alternative such the merger of Geroskipou with communities sharing the same boundaries.

Geroskipou, which had expressed its disagreement with merging with Paphos in the past, said that expediencies lie behind the announced proposal and interference by the larger municipalities.

According to Geroskipou, the announcement on the mergers was made without any consultations with local authorities which was in violation of the European Charter of Local Government.

Municipalities in the Famagusta district are not too happy either.

Ayia Napa, slated to merge with Protaras, Paralimni, Dherynia and Sotira, said it wanted to merge with Sotira and Liopteri instead. The two latter had also expressed the same wish in the past.

Dherynia Mayor Andros Karayiannis argued given that the town’s beach area is occupied, they would be turned into “a poor relation” after its merger was announced with the large coastal resorts of the area.

He said that a merger between Dherynia, Sotira and communities of the area would have been preferable since they have been sharing the same services for the past 30 years such as rubbish collection.

Mayor of Aradippou Evangelos Evangelides said there have been party interventions that affected the final decision. The mayor told CyBC that he finds the reform necessary but argued that while they were certain they would merge with Oroklini, Troulloi and Elia, were found instead in the same group as Larnaca, Livadia and Oroklini.

The community leader of the wealthy area of Ayios Tychonas, in Limassol Charalambos Ioannou, told media they have sought legal advice on the validity of this proposal since there was no prior consultation with the stakeholders. Ayios Tychonas, that hosts several five-star and four-star hotels, is to merge with Ayios Athanasios, Germasoyia, Mouttayiaka, Arkounta, Foinikaria and Armenochori.

The community leader, who has expressed his opposition also in the past to merging with municipalities and having only one vote in decision-making, called for a referendum.

He said the village’s budget for 2019 was €9.5m and will not be represented in a future municipal council with only one person, the same as a much smaller in population community.

Communities too said they were not happy, as they prefer clustering of services rather than mergers.

The Union of Cyprus Communities is to hold a meeting on December 16 with the participation of around 50 villages to discuss collective action ahead of the discussion of the proposal in parliament.