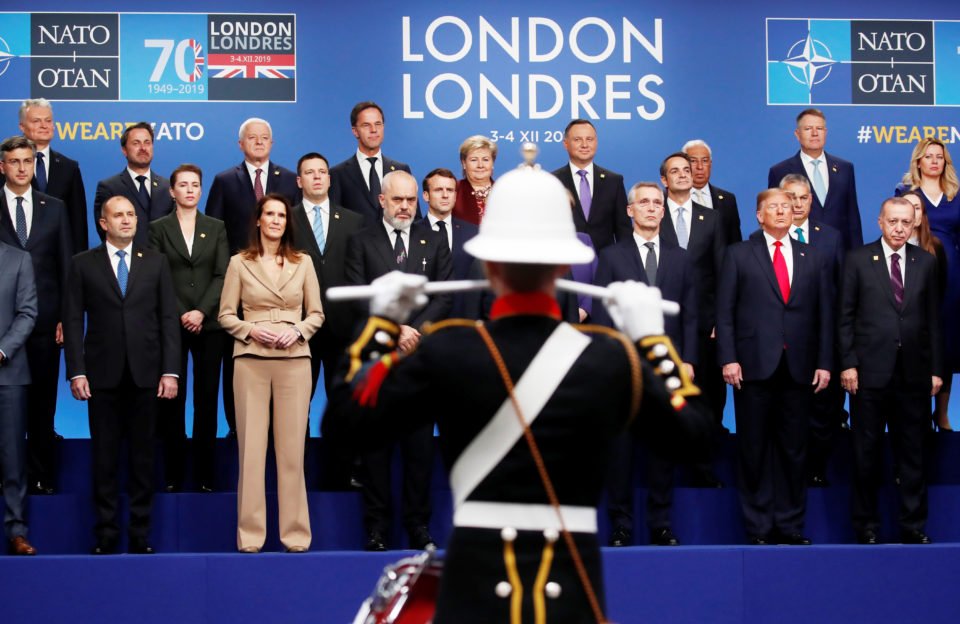 NATO leaders pose for a family photo during the NATO leaders summit in Watford, Britain
NATO leaders gathered at a golf resort near London on Wednesday for a summit acrimonious even by the standards of the Trump era, aiming to tackle disagreements over spending, future threats including China, and Turkey’s role in the alliance.

With US President Donald Trump and French President Emmanuel Macron blowing hot and cold over Nato’s role, the 29-member military alliance is looking for reinvigoration as it marks the 70th anniversary of its Cold War-era founding.

“Clearly it is very important that the alliance stays together,” British Prime Minister Boris Johnson told reporters, referring to divisions over Turkey’s incursion into northern Syria, carried out despite the objection of Ankara’s allies.

“But there is far, far more that unites us than divides us.”

Leaders held preliminary bilateral meetings in London on Tuesday, during which stark differences were aired, with Trump, who in the past has called NATO obsolete, criticising Macron for comments last month about Nato’s strategic “brain death”.

Macron held his ground, saying in a message on Twitter late on Tuesday that it was important for leaders to discuss issues in an open and forthright way if they were to find solutions.

“My statements on Nato triggered some reactions. I do stand by them,” Macron said. “It is a burden we share: we can’t put money and pay the cost of our soldier’s lives without being clear on the fundamentals of what Nato should be.”

One of Macron’s chief complaints is that Turkey, a Nato member since 1952 and a critical ally in the Middle East, has increasingly acted in a freelance way, carrying out incursions into Syria, taking up arms against the Kurdish YPG militia who had been allied with Western forces against Islamic State, and buying the S-400 missile defence system from Russia.

Turkish President Tayyip Erdogan has pushed back, saying he will oppose Nato’s plan for the defence of Baltic countries if the alliance does not recognise groups that Turkey deems terrorists, including the YPG.

Arriving for the gathering at an 18th-century estate that once hosted a golf championship won by Tiger Woods, Estonian Prime Minister Juri Ratas – whose country depends on Nato as a shield against Russia – said he was confident the alliance could overcome its divisions.

“Nato is strong. Nato’s deterrence is 100% credible,” he said. “Transatlantic … cooperation is a cornerstone for us, for our security, for both sides of the Atlantic.”

On Tuesday, Trump, who has long accused Washington’s allies of enjoying the protection of the US superpower without shouldering their share of the collective security burden, described allies who spend too little as “delinquent”.

At the summit, Europe, Turkey and Canada are expected to pledge that they will increase spending by $400 billion collectively on defence by 2024.

France and Germany, as core European members, want the alliance to consider a bigger role in the Middle East and possibly Africa, marking a shift away from its historically eastern-facing posture. They aim to win support to set up a “wise persons” group to draw up reform plans.

In a final communique, Nato allies will recommit to their pledge to defend each other – known as Article 5 in Nato parlance – while Britain is expected to put six warships, two fighter squadrons and thousands of troops at NATO’s disposal to meet a U.S. demand for European armies to be more combat-ready.

Nato will also warn China for the first time that it is monitoring Beijing’s growing military might. Leaders will agree to prepare for conflicts in space, the Arctic and computer networks, as well as traditional land, sea and air battles.

Nato Secretary-General Jens Stoltenberg told diplomats and experts ahead of the gathering that even though the acrimonious public comments were making headlines, the alliance is still making rapid, meaningful progress behind the scenes.

“I’m a politician, and I’m used to being criticised for good rhetoric but bad substance,” Stoltenberg said. “In the case of Nato it is the opposite. We have had bad rhetoric but extremely good substance.”