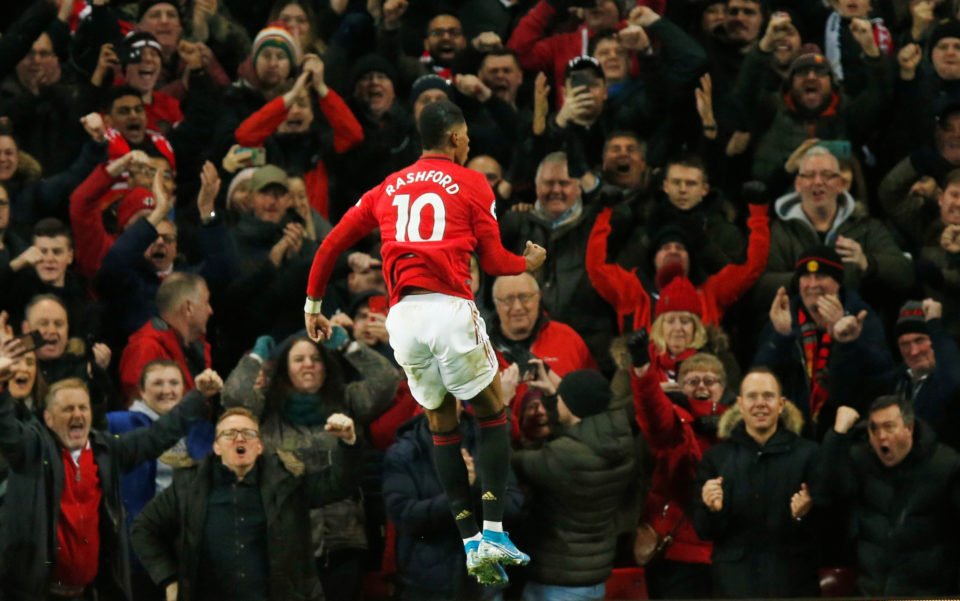 Jose Mourinho’s return to Old Trafford ended in defeat with Marcus Rashford scoring twice for Manchester United in a 2-1 victory over Tottenham Hotspur.

Mourinho was sacked as United manager almost a year ago and this was his first defeat in four games since taking over from Mauricio Pochettino at Spurs last month.

United grabbed a seventh minute lead when Spurs defender Davinson Sanchez came off second best in a tussle with Jesse Lingard and the ball fell to Rashford, who confidently unleashed a low drive which rattled in off the post.

Rashford, in oustanding form, then had a dipping drive brilliantly tipped on to the bar by Spurs keeper Paulo Gazzaniga and United created a series of good openings, playing some of their best football of the season so far.

But six minutes before the break, a Serge Aurier shot was saved by the legs of David De Gea, the ball looped high in the air and Dele Alli produced a remarkable piece of skill to bring the ball down and twist past Fred and Ashley Young before finishing with aplomb.

It took only four minutes of the second half for United to regain their advantage.

Cutting in from the left, Rashford jinked past Aurier and burst into the box only to be tripped by Moussa Sissoko, earning a penalty. He took the spot kick himself from a short run-up and slotted home.

Tammy Abraham scored a goal and set up another on his return from injury as Chelsea beat Aston Villa 2-1 on Wednesday to put their Premier League campaign back on track after two straight defeats.

Abraham, who played for Villa last season on loan, headed home from close range in the 24th minute after a lofted cross by right back Reece James, another of Chelsea’s home-grown players who have flourished under coach Frank Lampard.

Villa equalised with their first real chance of the game in the 41st minute when Egyptian Trezeguet headed a cross from his compatriot Ahmed El Mohamady on to his own foot and the ball crossed the line.

Chelsea regained the lead in style three minutes into the second half when Abraham chested a cross by Willian invitingly for fellow academy graduate Mason Mount to volley home.

Abraham, 22, missed Chelsea’s 1-0 defeat at home by West Ham United after he was injured in a Champions League match against Valencia a few days earlier.

Chelsea went in search of a third goal and Willian came closest to getting it when the Brazilian’s free kick was touched onto a post by Villa goalkeeper Tom Heaton. Chelsea keeper Kepa Arrizabalaga denied Ezri Konsa Ngoyo an equaliser in the dying moments.

The result left Chelsea in fourth place, six points above fifth-placed Wolverhampton Wanderers. Aston Villa are 15th and only one point clear of the relegation area.

Leicester City forward Jamie Vardy struck for the seventh Premier League game in a row to help his rampant side to a 2-0 home win over basement club Watford, a seventh consecutive league victory that leaves them second in the table.

Vardy, the league’s top scorer, smashed home from the penalty spot in the 55th minute to net his 14th goal of the season while midfielder James Maddison sealed the points with a strike deep in stoppage time.

Vardy had seen a penalty appeal turned down earlier in the game which instead earned him a yellow card for simulation but his side were soon awarded a spot kick when Watford’s Adam Mesina was penalised for striking Jonny Evans in the face.

Watford were playing their first game under caretaker coach Hayden Mullins after Quique Sanchez Flores was sacked following their 2-1 defeat by Southampton and showed plenty of fighting spirit as Leicester had to sweat to continue their winning run.

Winger Harvey Barnes was the hosts’ biggest threat and had several opportunities, including a chance to double the lead when he raced towards an incisive pass from Vardy but he was thwarted from close range by a brave block from Mesina.

Leicester are second behind Liverpool in the standings on 35 points after 15 games, while Watford stay rooted to the bottom on eight.

Leander Dendoncker netted a first-half goal and Italian forward Patrick Cutrone came off the bench to add a late second as Wolverhampton Wanderers cruised to a 2-0 Premier League home win over West Ham United on Wednesday.

Having showcased some intricate set-pieces early on, Wolves took the lead from a more straightforward corner as Joao Moutinho fired the ball into the middle and Dendoncker stretched to poke home his first goal of the season.

Robert Snodgrass had a great chance to level on the hour mark but he fluffed his lines when he found himself one-on-one with Rui Patricio, and a poor touch allowed the Wolves keeper to win the ball and avert the danger.

With Raul Jimenez and Adama Traore tormenting the West Ham back line, Wolves remained the more dangerous of the two sides, but it took the arrival of the 21-year-old Cutrone to put the game beyond doubt.

Having only scored a single Premier League goal since his arrival from AC Milan during the summer, Cutrone rifled the ball home two minutes after being brought on in the 84th minute to put the game beyond doubt.

Wolves climbed to fifth place in the table on 23 points after 15 games, while West Ham remain in 13th place on 16 points.

Results from the Premier League on Wednesday:

Woman died after being run over by her own car, police believe