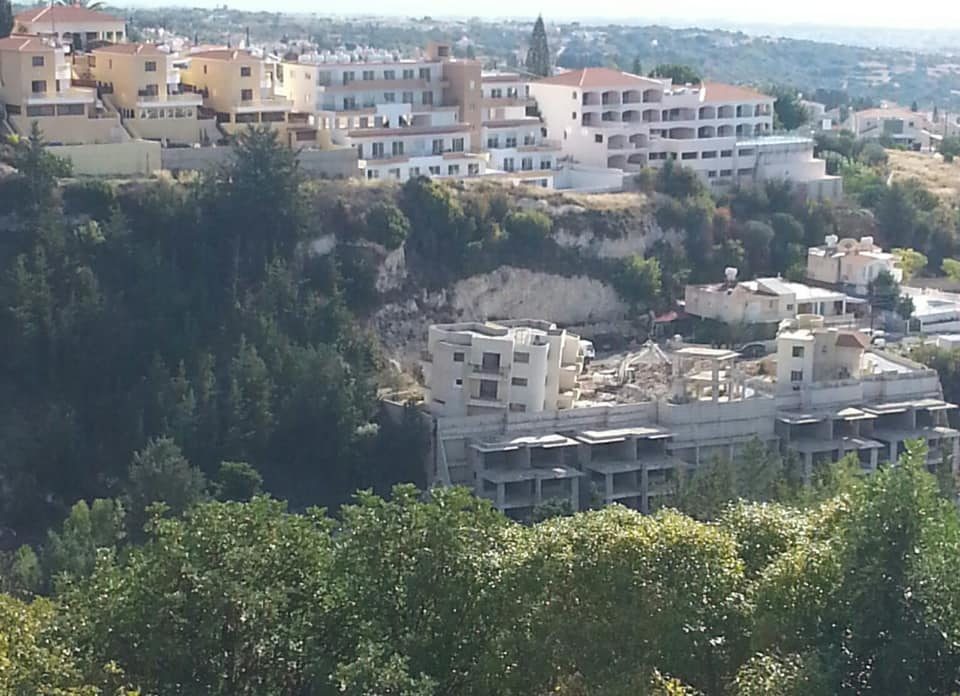 After years of waiting, Tala residents expressed their relief on Wednesday that a collapsing hillside development on the outskirts of the village is finally being demolished.

So dangerous had the buildings become that a crucial access road to the village below the complex had to be closed to the great inconvenience of residents.

Residents of the area said that they are now ‘extremely happy’ that the work has started.

“We are all very optimistic and relieved that the buildings are being demolished and once the road and hillside are repaired, it will make life so much easier for us all,” local resident Irina Yakimovitch told the Cyprus Mail on Wednesday.

The demolition of the collapsing development in Tala finally got underway on Monday, after months of court proceedings.

The court had given the developer until the end of July to demolish the complex of apartments and villas but nothing happened. The local authorities then put the work out to tender, according to the Paphos district office.

Tala authorities and residents had long called for its demolition and it is being carried out at the state’s expense, after the developer declared he could not undertake the costly project.

The complex was deemed dangerous after huge cracks appeared in the buildings which then began to tilt and split. Cracks then became apparent on the busy Kamares road beneath the complex which connects, Tala, Koili, Zelemenos and Kamares village.

The road has been closed since April 6 and will remain so for around a further three months, according to Tala community leader, Areti Pieridou.

“The demolition of the top floor (third floor) started on Monday and they have already demolished half of it. Work will then get underway on the second part of the development and lorries will take all of the rubble away,” she told the Cyprus Mail on Wednesday.

She added that the demolition would be reasonably swift, but that it will take longer to build retaining walls and repair the hillside and road beneath.

“I am very glad that the procedure is now underway, and I sympathise with the residents, it has been a bad time for them, and the procedure took so long. I just ask them to be patient a little while longer,” she said.

In August 2003, the developers purchased three residential plots from Ayios Neophytos Monastery with a building allowance of 60 per cent.

A building permit applied for in 2005 was approved and construction got underway in 2008. By 2010, five of the fourteen units were delivered to the owners.

The remainder of the complex was put on hold during the recession and was planned to be completed upon sale, according to the developer.

Following a period of heavy rainfall in 2011, the first cracks around the buildings and the parking areas appeared.

The developers argued that the fault lay with the authorities, as they would never have gone ahead with construction if they were aware that the land was ‘problematic’ to build on.

This claim is refuted by the authorities.

All residents and owners in the complete part of the complex were forced to leave after authorities deemed the properties unfit for habitation. The developers made arrangements with the property buyers to compensate them.

Gunmen kill head of Japan aid agency, 5 others in Afghanistan