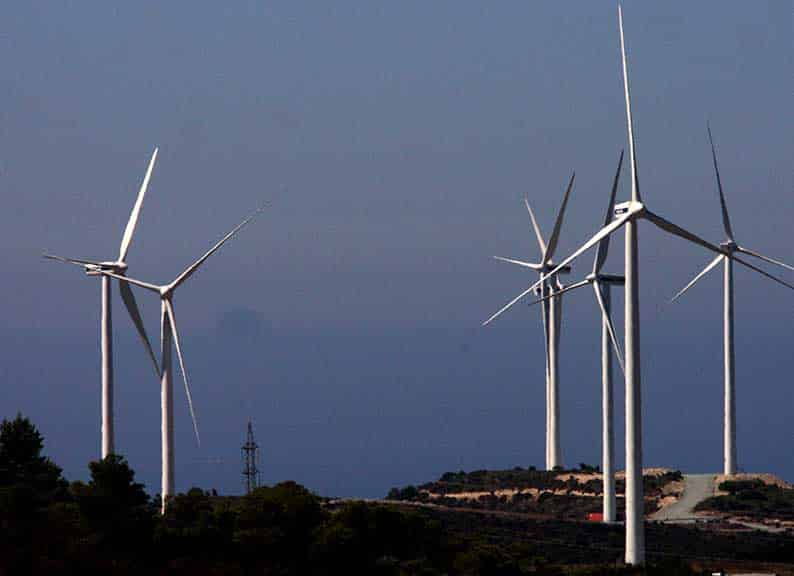 One of six wind farms on the island

State-aid Commissioner Theophanis Theophanous on Thursday dubbed the “biggest scandal of our time” an affair relating to the rates paid to producers of electricity from renewable energy sources (RES).

At the House watchdog committee, MPs heard of a “phantom committee” and that, to date, the state may have paid some €55m extra to RES producers than it otherwise might have.

Under a 2008 cabinet decision, investors in wind farms were guaranteed 16.6 cents per kilowatt-hour (kWh) over a 20-year period.

That decision did feature a rate negotiation clause, noting that the rates would be reassessed every four years.

The decision was notified to the European Commission, whose feedback is required where subsidy issues are concerned.

But a special report by auditor-general Odysseas Michaelides found that a ministerial committee (ministry of commerce and energy) tasked with overseeing RES affairs subsequently amended the rate policy, scrubbing the renegotiation clause.

The revised policy was never officially communicated to the European Commission, as it should have been.

That was because no official documents exist on the new policy. But its existence is deduced from government RES schemes where there is no mention of rate reassessments.

In short, contracts signed subsequently with wind farms did not feature a rate renegotiation clause.

The upshot is that the European Commission is still officially under the impression that the Cyprus government can renegotiate RES rates, whereas in practice that is not the case.

What’s more, no one seems to know who were the members of the RES ministerial committee which revised the policy. Their names are nowhere to be found, no paper trail exists, leading MPs to speak of a “phantom committee.”

Disy MP Annita Demetria told the Cyprus Mail that this is likely the same committee which had fixed the 16.6 cents rate.

“Explanations must be given as to why the [renegotiation] clause was deleted and whether certain people made excessive profits as a result.”

At this time, she added, there is no indication of malfeasance on the part of the RES producers themselves, who were simply signing off on the contracts presented to them.

The auditor-general will be compiling a report and sending it to the attorney-general, who will determine whether there is any evidence of criminal wrongdoing.

MPs also heard that the current cost of electricity production through conventional means – fossil fuels – stands at below 10 cents per kWh.

The contracts with RES producers were struck at a time when the production cost was much higher.

Pelosi says Democrats to pursue articles of impeachment against Trump