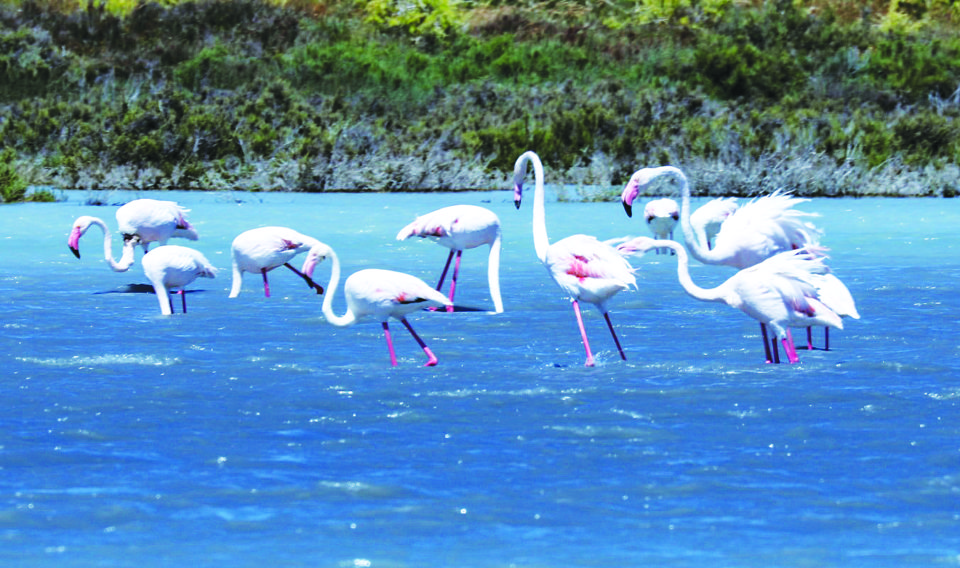 Approximately 11,000 flamingos have taken up residence at the salt lake site this year - one of the highest numbers ever

Staff at the Akrotiri Environmental and Education Centre have confirmed that approximately 11,000 flamingos have taken up residence at the salt lake site this year – one of the highest numbers ever.

The flamingos, which began arriving in October, ordinarily remain within the Sovereign Base Areas until at least January when their numbers are expected to peak.

According to officials at the Environmental Centre, many of the flamingos have arrived in Cyprus after spending time in southern Turkey.
Thomas Hadjikyriakou, the centre’s manager, explained how and why the flamingos keep coming back to Cyprus every year.

“The flamingos that arrive in Cyprus choose the area due to its climatic conditions”, he said.
“As soon as we have rain on the salt lake they will begin arriving and will continue to do so until about January or February.
“Of course, if we still have rainfall and the salt lake remains full, the flamingos will stay even longer.”

And according to Hadjikyriakou, the flamingos have a good system in place which tells them when they should start arriving on the island.
He continued: “The data on one of the flamingos that we have tagged tells us that it has been in Turkey for the past three years so we know they are pretty close. As a result, they are able to sense the change in climate which will give them an idea as to whether or not they should leave for Cyprus.

“They are also able to send groups over to look at the salt lake, almost like location scouts and if they see water, they can return to the larger group and basically report back to them.”

For the past three out of four years, the world famous black flamingo has been spotted on the salt lake but according to the Environmental Centre manager, so far this year there has been no sighting.

He continued: “Obviously, we would be delighted to see the black flamingo return because it does generate a lot of interest as it is so rare but as yet we haven’t seen it. The good thing is however, if it does come back, it is easy to spot and we have many people visiting the area every day to take a look.”

Bird watching is enormously popular in Cyprus and ‘agro-tourism’ is general is being promoted by Republic of Cyprus officials heavily every year.

And according to Hadjikyriakou, the Environmental Centre is the perfect place to go for somebody keen to get the perfect view of the spectacular sight on the salt lake.

He explained: “We have designed the centre so people can come and see all of the amazing sights in and around the salt lake. We have telescopes set up so you can get a really close look at the flamingos and of course, all the other wildlife that we have in the area.

“We have also introduced a further 100 plant species into the gardens at the centre, so that takes our number up to 200 in total now, so it is worth coming along to see what we have on offer.”

But whilst Hadjikyriakou was keen to encourage people to visit the centre, he also warned flamingo watchers to stay off the salt lake.
“It is so important that if people want to see the flamingos that they come to visit us at the centre,” he said. “If people try to walk on the salt lake and get close, it can destroy the natural habitat and we can’t allow that to happen.

“The best time to see the flamingos is in the early morning, so if you want to get a good look, come and visit us at the centre and you can enjoy the view from there.”

Larnaca municipality warns of measures if port deal not signed

Coronavirus: Buses to operate at full capacity, masks must be worn