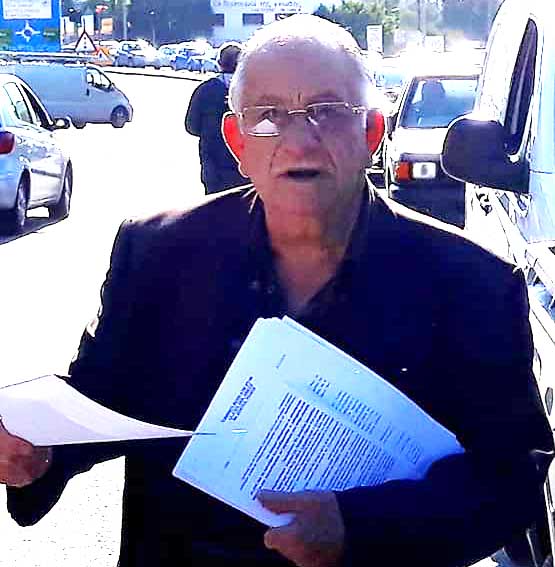 A resident hands out leaflets on Saturday (Photo: Takis Panayiotou/Facebook)

Residents of Ayia Fyla in Limassol symbolically blocked the avenue bearing the same name on Saturday morning in protest over the daily traffic congestion they are faced with due to the inactivity of authorities to address the situation.

Protesters also handed out flyers to drivers highlighting the problem and calling on authorities to take action.

Organisers, the Ayia Fyla Friends Association and other groups, said their area has become one of the most densely populated areas of Limassol with hundreds of homes being built each year but it is lacking the necessary infrastructure to facilitate residents travel to and from the city centre. During rush hour, they said, it takes more than an hour to travel to or return from the city centre while traffic accidents occur often, causing severe material damage, even deaths.

Limassol municipality in a statement blamed the situation on the government arguing there has been inaction for years for all areas of the city and that the project concerning Ayia Fyla is among had to be completed years ago.

It said that after the new mayor and municipal council took over a traffic study was carried out on the Ayia Fyla roundabout whose findings call for the creation of an above-ground pedestrian crossing to connect the Costis Palamas (south of the motorway) and Ellis Lambeti (north of the motorway) roads, as well as the creation of parallel entrances to the highway. These two projects are being promoted by the public works department for further evaluation, the municipality said.

It also said that works are expected to begin in 2021 for the completion of the westbound Evagoras Lanitis road which had been put on ice for years while works on the completion of its eastbound route are being re-promoted as well as the bypass road in relation to the centre of Ayia Fyla.

The municipality also said that tender competitions have been announced by the Limassol sewerage board on many flood-protection projects which are expected to solve the problems faced in the Ayia Fyla area for years.

The transport ministry said earlier in the week that the redevelopment of Ayia Fyla Avenue was among its priorities. The project involves widening and improving the road with the first phase already completed, the ministry said.

Phase two of the project is expected to start toward the end of 2020, the ministry said, while the final phase will be advanced after its completion.

Transport Minister Yiannis Karousos is expected to visit the area later in the month.

Meanwhile, Dhali residents also blocked the road for a period of time in their area in protest over the operation of an asphalt unit nearby which, they say, affects the air quality since it emits fumes.

Cavusoglu: Turkey will protect its drillships by any means necessary