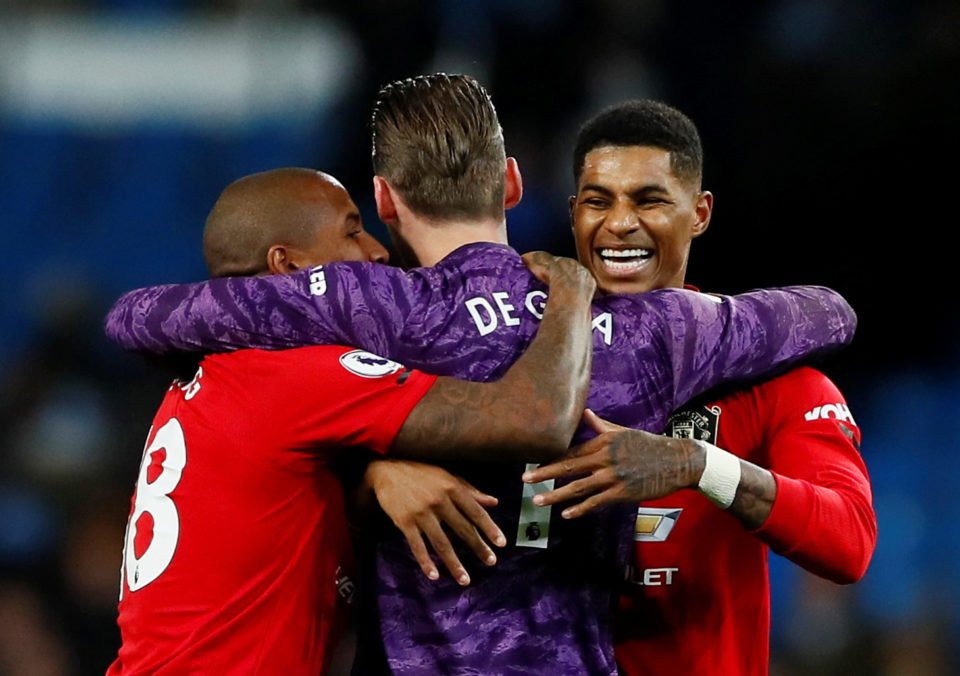 The Red Devils celebrate a memorable win in the Manchester derby

Goals from Marcus Rashford (penalty) and Anthony Martial put Ole Gunnar Solskjaer’s side 2-0 up at the break and City only pulled one back in the 85th minute through Nicolas Otamendi.

While over half the season remains to be played it is hard to see a scenario where Liverpool throw away this huge advantage, particularly given the way Guardiola’s side are struggling to get anywhere close to the performance levels of their back-to-back title campaigns.

This was City’s fourth defeat of the season and 32 points marks Guardiola’s worst return after the first 16 matches of a top-flight season in his managerial career.

For United, now up to fifth and within eight points of City, it was the finest Premier League win for their manager Ole Gunnar Solskjaer and capped a perfect week after they beat Jose Mourinho’s Tottenham on Wednesday.

United were a constant threat on the counter-attack with the pace of the front three but crucially showed organisation and resilience to cope with City’s inevitable response after the break.

Remarkably though, United could have had the game wrapped up inside half hour, given the amount of chances they created as they swept aside City in midfield and exposed their shaky defence.

Daniel James and Martial tested City keeper Ederson in the early stages before Rashford, in a rich vein of form, engineered the opener.

A VAR review ruled that Bernardo Silva had brought down Rashford inside the box and the United striker kept his cool to convert from the spot.

Rashford missed a good chance to double the lead, curling wide from a promising position and with United ripping open the City defence the England forward struck the bar with a lofted shot from the edge of the box.

The second goal wasn’t long in coming, however, Martial squeezing home a low, left-foot shot after a swift exchange with Dan James.

City felt they should have had a penalty before the break when Fred slid in to block a low pull-back from Kyle Walker with the home players feeling the ball struck his arm but the VAR review backed referee Anthony Taylor’s judgement.

Guardiola’s side were on top for most of the second half but when they did manage to break down United’s back line, Spanish keeper David De Gea kept them at bay.

On the hour, Victor Lindelof was caught dawdling on the ball in the area and robbed by Raheem Sterling inside box but the forward overdid his dribble across the area and the chance evaporated.

Four minutes later Rodri let fly from the edge of the box and his effort took a deflection but somehow De Gea managed to reach back to tip over the bar.

Five minutes from the end, Otamendi headed in a Riyad Mahrez cross after a corner, powering the ball in with real determination and the Etihad came alive.

The prompted a late scramble for an equaliser but once again the inspired De Gea was able to get down to keep out their most dangerous effort, a low shot from substitute Mahrez.

United’s Brazilian midfielder Fred appeared to be struck by an object thrown from the crowd while taking a corner in the second half, with reports that he and Jesse Lingard were subjected to racial abuse.