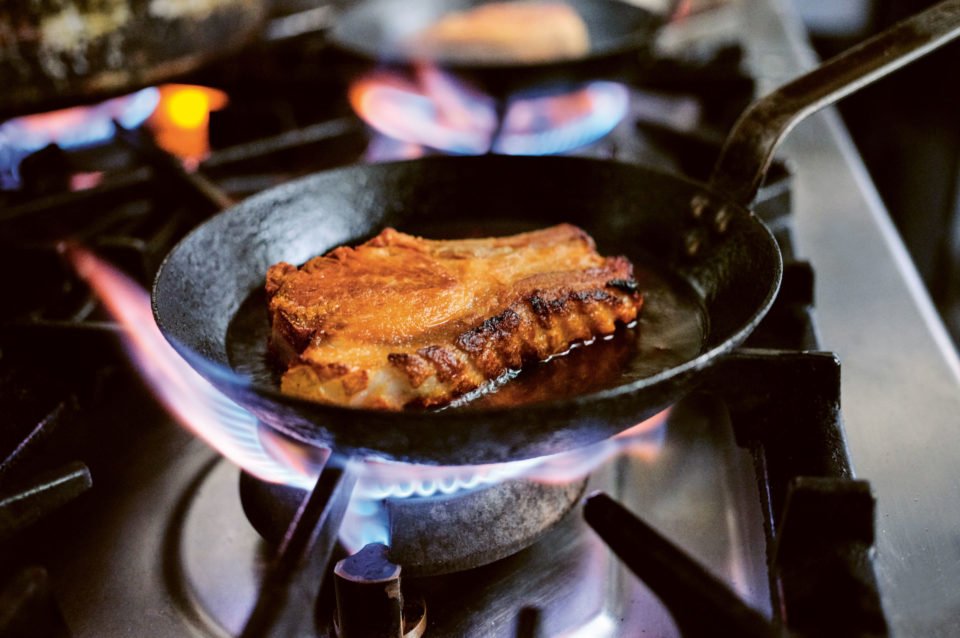 You think you know potatoes, and then you discover what The Quality Chop House does to them.

Chef Shaun Searley began putting confit potatoes on the London restaurant’s menu back in 2013 but they weren’t a guarantee to begin with – you might have been in luck on any given day, or crushingly, you might not.

Then punters cottoned onto these crisp, boxy, deep-fried layered potato inventions, striped with mustard dressing, and refused to give them up, meaning the Chop House kitchen is now utterly “held ransom” by them.

But at least you can now actually make them at home too, thanks to the restaurant’s new, eponymous cookbook. It’s an ideal development if you don’t live in London but need a confit chip fix.

Ostensibly a recipe collection, the book also tells the story of The Quality Chop House, which has been a restaurant in various guises for 150 years.

Will Lander and business partner Daniel Morgenthau took over the Grade-II listed Victorian building in 2012 and wrote the book together, alongside Searley.

“We were slightly in awe of it,” he says of the building itself, but that’s not a feeling you need adopt when attempting Searley’s recipes.

“We’re trying to translate what a team of eight chefs can do with six hours, into what a parent with two screaming kids can do in 40 minutes, and make it work for them,” Lander explains.

While some of the dishes are a little more “cheffy and more ornate”, Searley’s cooking is “certainly not about over complexity” says Lander. And Searley agrees, saying the Chop House’s food is about “simple but not simplistic” cooking.

They take something simple and everyday, like a potato or a chop, and elevate it. So the book might detail nine or so steps for cooking a pork chop, rather than the one step you might think there is, but, says Lander: “We like to think that if you follow that, you’re rewarded.”

And their chops are really something. Back in the kitchen, Searley is explaining fat-to-muscle ratios, and why you ought to focus on thickness when you’re picking a chop, rather than weight. And the 2-3cm wedge of yellow-white fat holding it all together? “You want to spend 10 minutes just on that,” he says, rendering it down in the pan until it’s completely burnished.

Preheat the oven to 90C.

Use a sharp knife to remove the rind from the pork chop but leave on the thick layer of fat – you’ll be rendering it down and the resulting hot fat means you can caramelise the meat perfectly.

Score the fat. Place a dry frying pan over a low heat and lay the chop in the pan, fat-side down, to render for 10 minutes. You should end up with a good centimetre of cooked fat on the chop, as well as about a centimetre of hot pork fat in the pan. Increase to a medium-high heat. Lay the chop sideways in the pan and cook it for two minutes on each side; you want to turn the chop four times in total – so, cook one side for one minute, turn, cook the other side for one minute, turn and repeat. You should have a deep, caramelised crust on both sides after these four turns.

Remove from the heat and take it out of the pan. Rest for three to four minutes, then pop it into the preheated oven to cook for 10-15 minutes. Rest for another 10 minutes and serve.

For the mustard dressing

Make the mustard dressing. Mix the mustard, lemon juice and vinegar in a large bowl, then whisk in the vegetable oil until emulsified. Store in squeezy bottles in the fridge until you’re ready to use.

Preheat the oven to 120C and line a standard 1.7-litre terrine mould with baking parchment.

Peel and wash the potatoes, then use a mandoline to slice them as thinly as possible. In a large bowl, toss the slices thoroughly with the duck fat and salt. Layer the potatoes in the mould, one slice at a time, until you’ve built up multiple tiers. Once you’ve used up all the potato, cover the top with baking parchment and cook for about three hours until the potatoes are completely tender.

Place a small baking tray or plate on top of the baking parchment covering the potatoes, along with a few heavy weights and leave to cool, then refrigerate overnight to compress.

The next day, remove from the tray and cut the potato into 3x3cm pieces.

Heat enough oil for deep-fat frying to 190C, either in a deep fryer or a heavy-based saucepan. Fry the pieces for about four minutes until croissant-gold. Sprinkle over some Maldon salt, drizzle with mustard dressing and eat immediately.

Larnaca gets biggest artificial reef yet as Elpida sunk off coast