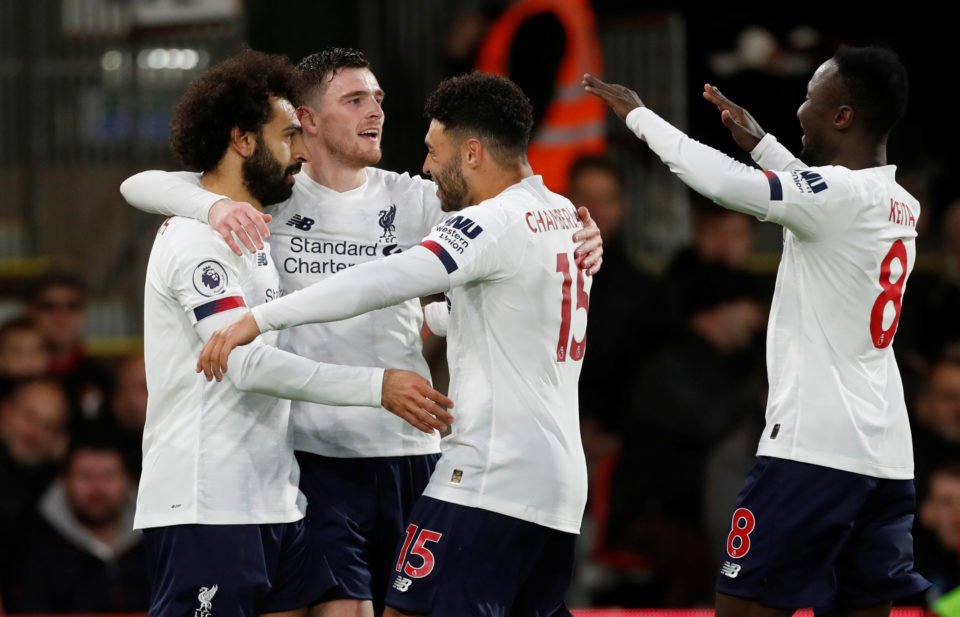 Liverpool chalked up another routine win, 3-0 at Bournemouth, to open a daunting 11-point lead in the Premier League on a day when Everton finally had something to cheer as caretaker manager Duncan Ferguson inspired a 3-1 victory over Chelsea.

The individual honours, however, were taken by Tottenham Hotspur’s Son Heung-min who dribbled almost the entire length of the pitch to score in his side’s 5-0 rout of Burnley while bottom side Watford and Crystal Palace shared a goalless draw.

With Manchester City not playing until later on Saturday against Manchester United, and second-placed Leicester City in action on Sunday, Liverpool, who are now 1-4 to win the title, took their chance to move further clear.

Having won 4-0 on their previous two visits to Bournemouth, manager Juergen Klopp again shuffled his side, making seven changes from the midweek Merseyside derby.

An injury sustained by defender Dejan Lovren was the only blot on Livepool’s day, but Klopp said he was hoping it was just a touch of cramp.

At Goodison Park, Everton looked nothing like the side who had subsided so abjectly at Liverpool, obviously re-energised by the fiery presence of Duncan Ferguson in place of Marco Silva in the dressing-room.

The Scot’s decision to switch formation was instantly rewarded with a goal for Richarlison before Dominic Calvert-Lewin added a double to send the crowd wild.

Although Ferguson said he thoroughly enjoyed his first game in charge, he will not be asking for the job full-time.

“Honestly, I won’t be going asking for the job. I’m just here for Everton. It was an unbelievable experience. One I’ll never forget. We want the very best managers in the world at Everton Football Club. It’s one game. It’s one result.”

The win moved Everton away from the relegation zone with most of their rivals playing on Sunday.

At the Tottenham Hotspur stadium, Spurs delivered exactly the sort of response to their defeat at Manchester United that manager Jose Mourinho would have been looking for.

Although Harry Kane scored twice to make it eight goals in nine games against Burnley, Son took the headlines with a superb effort that started just outside his own area and saw the South Korean slalom through half the opposition before slotting home from inside the box.

Lucas Moura and Moussa Sissoko completed the scoring against a Burnley side who have conceded nine goals in four days.

“Sonny stole the show today,” said Kane, who is not often overshadowed in front of goal. “An unbelievable goal, a great counter attack. All he wants to do is work hard and play for the team. He has great quality and works hard for the team.”

Struggling Watford ended a string of three straight defeats against Crystal Palace in a scrappy game watched by their incoming manager Nigel Pearson, whose first game in charge could not be harder — a trip to Liverpool next Saturday.