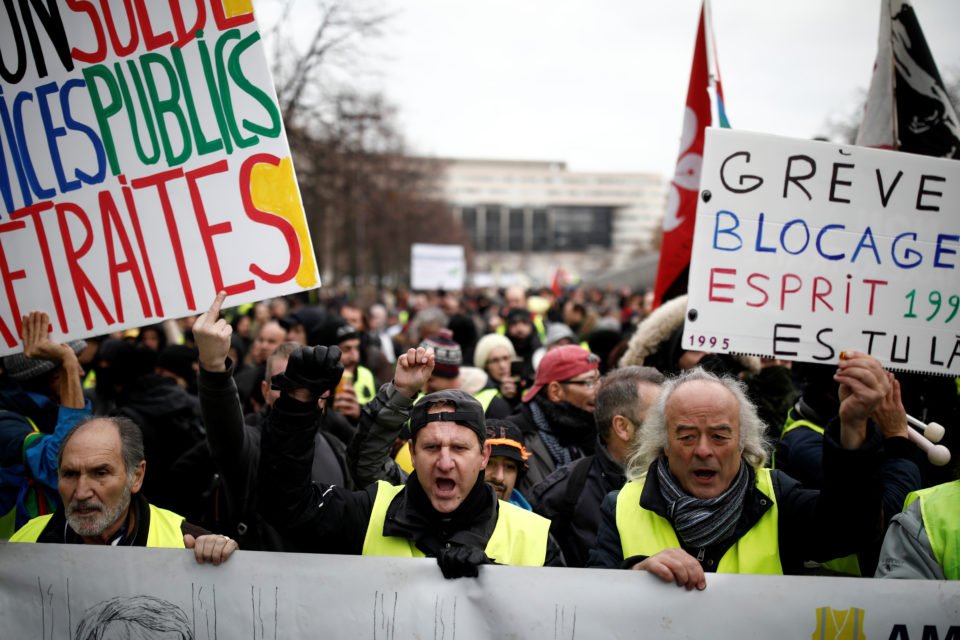 Truckers blocked roads in about 10 regions around France on Saturday to protest against a planned reduction in tax breaks on diesel for road transport, while train and metro services remained heavily disrupted by a strike against pension reform.

In Paris there were scuffles with police in the Denfert Rochereau area of the residential Left Bank as several hundred “yellow vest” protesters continued their weekly demonstrations, but numbers were relatively small compared with previous weeks as the transport strike made it hard to reach the capital.

The combined pressure of the yellow vest movement over the cost of living and union protests against pension reform are a major challenge to President Emmanuel Macron’s efforts to balance the state budget and introduce more environmentally friendly legislation in the second half of his mandate.

“Our movement is a movement of rage against the continued fiscal punishment of road transport that we can no longer tolerate,” Alexis Gibergues, Otre’s president in the Ile-de-France region around Paris, said on LCI television.

Gibergues said truckers were not targeting city centres for now, but that could change if the government does not respond.

French TV showed images of trucks blocking motorways in several parts of the country including the Ile-de-France. Passenger cars were allowed to pass slowly, but many foreign trucks were forced to stop.

Truckers’ organisations complain that foreign truckers can buy cheaper fuel at home, which allows them to operate more efficiently in France.

The measure is expected to raise about 140 million euros in a full year, which the government wants to use to finance new transport infrastructure. The draft law is set to get a second reading in parliament in mid-December.

Meanwhile French public transport systems were paralysed on Thursday and Friday by a strike against planned pension reforms.

On Saturday, transport remained disrupted, with only one in 10 regional trains and one in six high-speed TGV services running. In Paris, only lines 1 and 14 – both automatic, driverless lines – were in operation.

US and Iran swap prisoners in rare act of cooperation