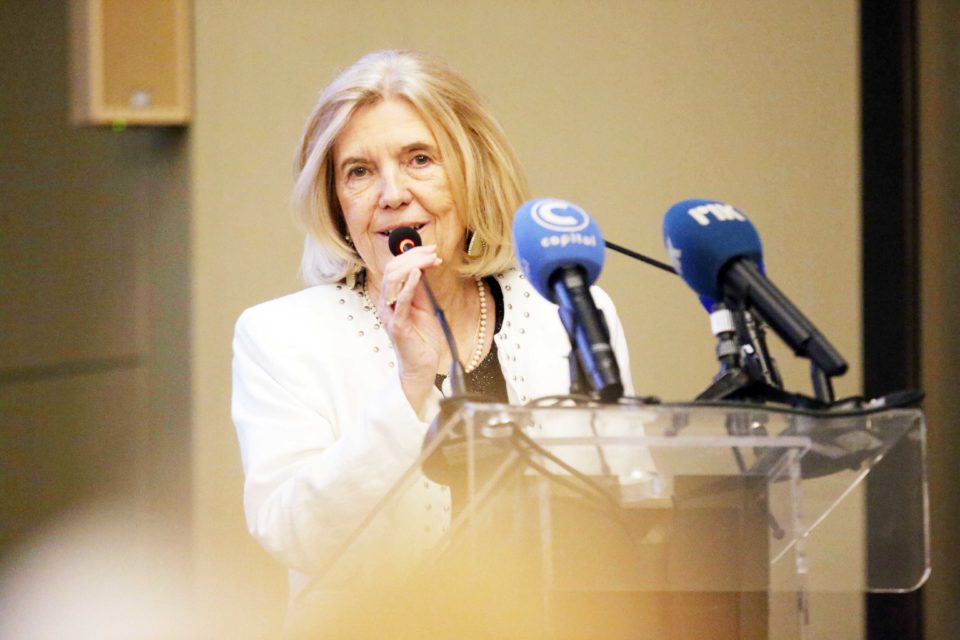 HEARD the one about Donald Trump sitting on the beach with the pope? Well, the pope’s hat blew off into the water but The Donald said not to worry he would just go get it, so he got up, walked across the water and retrieved it. The headlines the next day read: ‘Donald Trump can’t swim’.

The joke is told by Rosine Ghawji, a French American woman who is a strong advocate for Trump after knowing him for 30 years, and who told delegates to the Cyprus Mail symposium on Syria that the media was trying to destroy the widely derided US president. “They have lost all objectivity,” she said.

The joke she told the Sunday Mail might seem exaggerated but a real headline from the Washington Post last week was within spitting distance of Ghawji’s punchline. A day after Trump tweeted a meme with a photo of his head on Rambo’s body, the headline on the newspaper that broke Watergate, in all seriousness said: ‘Trump tweets doctored photo of his head on Sylvester Stallone’s body, unclear why’.

The 95 per cent negative media coverage Trump receives does not sway Ghawji, who has headed up an organisation called ‘Working Mothers for Trump’ since the 2016 presidential campaign. It’s very unusual to meet a bone fide Trump supporter in real life in Cyprus, a novelty even, and especially someone who does not shy away from expressing her admiration for the man despite the absolute certainty of public ridicule in mainstream and establishment circles.

“Donald Trump is a man with a big heart,” Ghawji says unabashedly. “I had no doubt he would be elected.”

She said that in a few years “after his second term”, the history books would talk in terms of the world ‘Before Trump’ and the world ‘After Trump’, an axiom with two different interpretations. “Donald Trump is a man of peace. He likes to sit at the table and listen to everyone and then make up his own mind. He is anti-war but if you attack, he will answer,” Ghawji adds.

Referring to Cyprus, she told delegates: “You have a problem. We have to put Turkey in its place. Donald Trump, even if he was aware of all the problems around the world, I don’t think, and of course I can’t be sure, that he is aware of exactly what’s going on in Cyprus.” Ghawji plans to inform him now that she has seen the island’s division for herself, she told the Sunday Mail.

Rosine Ghawji, 67, is no stranger to controversy but is not afraid to speak out, which has drawn some attention to her French circles that are said to include the Le Pen family, a connection that has been used by the media to link Trump with the extreme right. She also went through a very acrimonious and very public divorce from her Syrian husband in the US almost 20 years ago, reporting to the FBI on his activities for years. “My husband was a member of the Muslim Brotherhood, which I didn’t know,” said Ghawji, a Catholic. It’s a long and complicated tale.

The divorce also left a bitter taste with regards to the judicial system and the family courts in the US, and she began engaging in politics, even testifying with a group of other women in the Senate against judicial corruption. They made a few inroads but not enough because everything, according to Ghawji, comes down to money in US politics.

“The ones that have the money win. We send people to Washington [Congress]. They might go with a million but a few years later they are multi-millionaires,” she said, adding that it was all down buying influence. She cited lobbies such as big pharma, big food, and influential giants like Monsanto. At the same time manufacturing and industry had gone. “Everything is made in China. We have nothing,” she said. This was why Trump’s campaign appealed. She said he told her in 2015 the country was going down the drain and even though he was not a politician he believed he could do better and would take a chance on running for office. “They hate him so much because he broke the [establishment elites] circle,” Ghawji added.

It is incomprehensible to many women why any of their gender would support ‘Grab ‘em by the p***y’ Don, though his full statement on that 2016 leaked tape is usually omitted, where he says: “They let you”. “Donald Trump is not a woman chaser to start with,” says Ghawji, adding that ‘The Donald’ as she regularly refers to him, like Omar Sharif, was constantly being chased by women attracted to money and power. “If we got rid of all the politicians in France for the same reasons, all of the seats [in the parliament] would be empty, ” she added.

But what about the impeachment?

“Pah,” she scoffs. “I hope they [the Democrats] keep doing the hearings because it only gets worse for them. He is up against a lot but he will bring peace. Another four years and the world will be different,” Ghawji says.

Music to the ears of Trump supporters no doubt. For detractors of the US president the tune will sound more like famous last words.

Syria: the most complex conflict of our time

Bank workers union claim being bullied into not striking