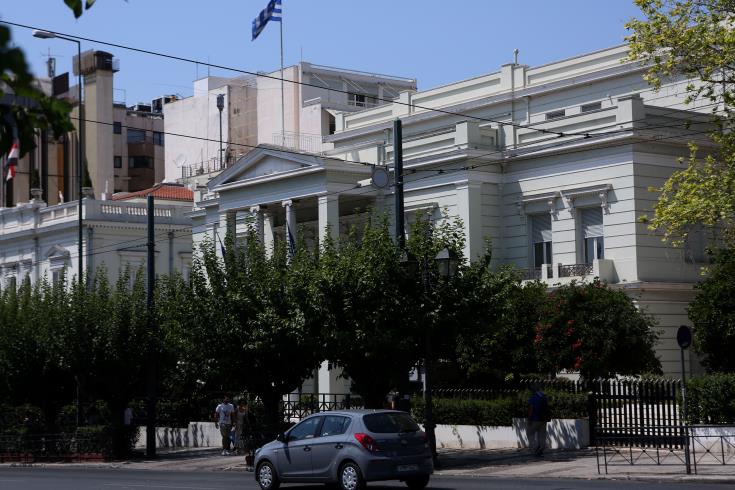 The Greek foreign ministry in Athens

The maritime delimitation agreement between Turkey and Libya has no value, the Greek foreign ministry has said in response to Ankara’s announcement on Saturday that it had been deposited with the UN.

In a written statement, the Greek foreign ministry said late Saturday that the agreement has no legal standing. “Under international law, the memorandum signed by Mr Erdogan has no value and no legal force,” it said.

“It would be worthwhile for Turkey to finally stop its provocative actions and to work with respect for international law and the rules of good neighbourliness for the advancement of relations between the peoples of the region”.

A foreign ministry spokesman said later on Sunday: “Hubris is the choice of one who cannot accept his history, one who has no arguments and prefers to provoke and threaten, the one who stubbornly refuses to respect the rules that apply to everyone and who is arbitrarily demanding special treatment.”

Turkey’s continued effort to distort historical events is regrettable, he added, calling on Ankara to refrain from issuing further challenges and to work towards dialogue and respect for international law.

“It needs to understand that good neighbourliness, security and stability, as well as the prosperity of our wider region, will benefit itself as well,” he said.

Following the announcement by Turkey late last month that it had signed an agreement with Libya on the delimitation of their EEZs the Cyprus government said it had sought legal recourse against Turkey at the International Court of Justice (ICJ) at The Hague over Ankara’s claims to large swathes of Cyprus’ EEZ and continental shelf.

The case was filed unilaterally, and while the government admits that without Turkey giving its consent, the case cannot proceed. Foreign Affairs Minister Nikos Christodoulides on Friday called on Turkey to accept Cyprus’ invitation to settle their differences at the ICJ.

Since Turkey is constantly declaring its actions are based on international law, he said, it should seize the opportunity to solve differences with Cyprus in court.

Turkey, which announced the accord and a deal on expanded security and military cooperation on Thursday, gave no details of their memorandum of understanding and did not specify where Turkish and Libyan waters meet.

Greece said any such accord would be geographically absurd because it ignored the presence of the Greek island of Crete between the coasts of Turkey and Libya. Along with Cyprus and Greece, Egypt has also condemned the move.

Nicosia lights up for Christmas (photos)