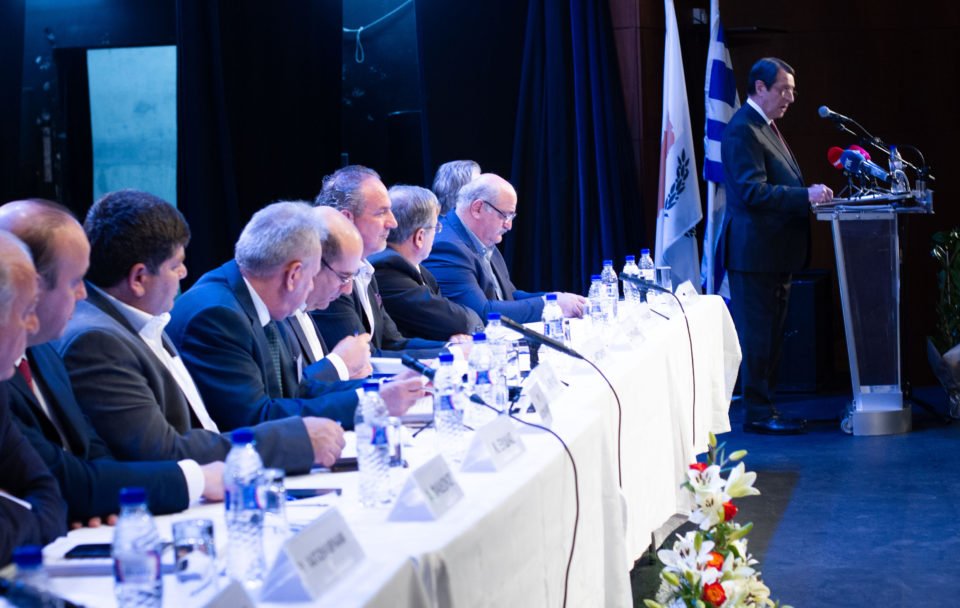 President Nicos Anastasiades on Monday said reactions to the proposed bill on municipality mergers were respected but that the priority was on the ultimate benefits of the reform.

In his address at the annual general assembly of the Union of Municipalities (UoM), Anastasiades said that between €30m and €50m would be saved through the mergers.

“Through a creative dialogue, solutions will be found to address any concerns,” he said.

According to the president, the reform proposal is not just restricted to the merger of municipalities and communities’ aims at redesigning their model of governance “in a way that promotes their independence from the central government, allowing them to provide more quality and efficient services.”
The first of three pillars the reform was built on, he said, is the transfer of new responsibilities from the central level to the municipalities, making them the most essential actors of local development. Among other things, they will be given the task of creating a single development authority in each new municipality, which will issue both planning and building permits, establish municipal police, and implement development projects.

The second pillar concerns the administrative and financial autonomy of the local authorities. In this regard, municipalities will receive the total revenue from car registration fees, which equates to a 40-50 per cent increase in revenue compared with the existing state subsidy, and the possibility of levying a specific fee for a specific period of time for the implementation of local development projects.
Finally, the third pillar concerns the adoption of new control, transparency and accountability mechanisms with municipalities required to have balanced or surplus budgets, publish online all the decisions of city councils, budgets, reports of the auditor-general, appointments, and any expenses beyond €5,000. They will also have to create internal audit units for all decisions of the municipal council.

“Given the concerns and sensitivities of each community and municipality, and with the primary concern of ensuring that the specific nature of the local authorities is maintained, each unified municipality or community retains not only its name as a municipal district of the new municipality, but also the proportional representation that will enable it through the budget of the merged municipalities to make meaningful local development interventions,” he said.

Concluding, he called on the UoM to engage in a creative dialogue and work with political parties to find the necessary consensus to adopt the relevant legislation as soon as possible, which would create financially robust and administratively flexible municipalities that respond to the legitimate expectations of their residents.

The interior ministry rolled out its proposed local government reform programme last week whereby 17 new municipalities will be formed from the planned merger of the existing 30: four in Nicosia, four in Limassol, four in Larnaca, three in Paphos and two in Famagusta.

Head of the UoM, Larnaca mayor Andreas Vyras said that now, they are awaiting the final act of the lengthy process that preceded the decisions the House will take.

“We feel confident and optimistic that all efforts will be sealed with the necessary consents, because we all know that this is not the end, but the beginning of a renewed effort,” Vyras said.