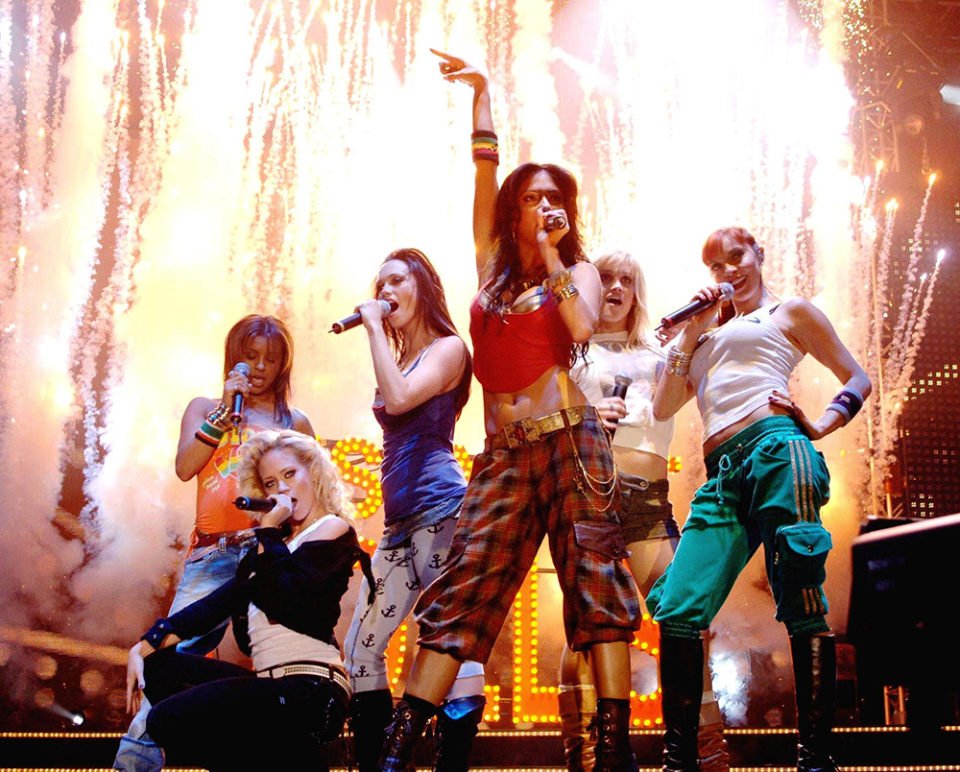 PA image of the Pussycat Dolls on stage at the T4 Poll Winners Party 2005. Ian West/PA.

The Pussycat Dolls are getting back together. They are not the first act to have done so of late. ALEX GREEN speaks to the quintet about the prospect of new music, their message of female empowerment and the group’s missing sixth member

THEY were perhaps the best-drilled pop group of the noughties.

And their risque combination of catchy anthems, sexually-charged lyrics and burlesque-inspired dance routines earned them a legion of fans.

So in this age of comebacks, it was almost inevitable that the Pussycats Dolls would reunite.

A decade on from their split, Nicole Scherzinger, Ashley Roberts, Kimberly Wyatt, Carmit Bachar and Jessica Sutta are back together for a tour of the UK and Ireland in April 2020.

“Ten years… It has been a long time,” says an excited Roberts.

“A lot has happened. We have got families, kids, marriages, life.

“It was just the right timing. The stars aligned and we had some unfinished business.

“We wanted to go out there and do it again with the iconic moves, with the nostalgic moves – but give it a little upgrade.

“We are all excited to be here in the same room and get it going again.”

Formed as a burlesque troupe in 1995 by choreographer Robin Antin in Los Angeles, California, they released a string of hits (Don’t Cha, Buttons, Stickwitu) and two studio albums.

But under the surface, tension was bubbling over Scherzinger’s dominant role in the band.

That tension eventually boiled over and they split in 2010.

Roberts later addressed the swirling public speculation during a stint on ITV’s reality show I’m A Celebrity… Get Me Out Of Here!, claiming that “only Nicole was allowed to talk”.

She added: “Why do you think the band broke up? U2 are still together and they split everything down the middle.”

Now with the Pussycat Dolls in their late 30s to mid 40s, a reunion comes with the promise of new material.

“We have been working on some new music,” Scherzinger admits.

The group’s sixth member Melody Thornton, the youngest of the lot, is conspicuously missing.

During her time in the Pussycat Dolls, Thornton was reported to have clashed with Scherzinger.

But the group are enthusiastic about her potentially joining them on tour.

Much has changed in the past decade. How do the Pussycat Dolls fit in to the post-Me Too landscape?

This time around their message is one of female empowerment, they say.

“Right now is a really great time in history for female empowerment and empowerment in general,” says Scherzinger.

“We want to put it in the mindset and the hearts of others.

“We want to inspire others who are still struggling and stepping into their own power and acceptance.”

Of all the Pussycat Dolls, Scherzinger has had the most prolific decade.

“Don’t let anyone determine your success,” she says.

Scherzinger has certainly lived by that mantra, winning the 10th series of Dancing With The Stars, starring in the West End revival of Cats and judging shows likes the X Factor and Australia’s Got Talent.

Roberts is not far behind with a string of TV roles including co-hosting Ant and Dec’s Saturday Night Takeaway for a number of years.

When we speak, the quintet have already spent days in the dance studio running routines for their comeback show during the final of X Factor: Celebrity, where Scherzinger is a judge.

Roberts is most enthusiastic, exclaiming: “It’s amazing because we all got back into the space and the music was on, and we all started moving and grooving together and bringing it all back.

“I feel more sore than I remember being, but we are throwing it down.”

Scherzinger is coy about who initially proposed the idea to relaunch the brand in this manner.

But one could guess the idea was thrashed out between herself and her longstanding business partner, X Factor mogul Simon Cowell, behind closed doors.

“I’m excited. I’m so honoured that the girls are going to be there with me.

“I want them to feel amazing. They are going to feel like the rock stars they are.”

Their performance came the following Saturday.

Smoke guns fired and lasers lit up the stage as they danced to a medley of their hits before being joined by a troupe of male back-up dancers.

Against a backdrop of flames, they also performed a snippet of their new song React.

Of course, things have changed in the lives of each woman since 2010.

Roberts says she will be taking him on tour and Wyatt hints that her husband and children might also join them.

“We have a lot of things to sort out,” explains Wyatt