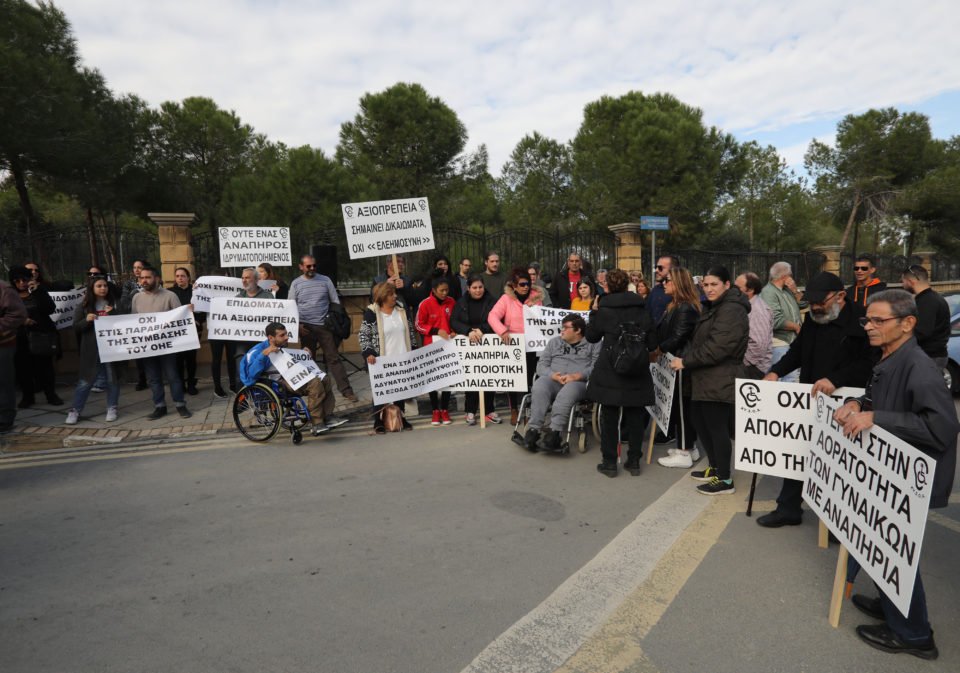 Demonstrators outside the palace

A delegation of people with disabilities gathered outside the presidential palace on Tuesday morning expecting to see the president and submit a written statement with their demands.

Holding banners with slogans like ‘Poverty is brought by the state not people with disabilities’, representatives had hoped to see the president to outline their complaints, on Human Rights Day, marked on December 10.

President Nicos Anastasiades was unable to accept the delegation due to his busy schedule, said director of the president’s office Petros Demetriou, who accepted the statement on his behalf.

One of their main demands is the increase of disability benefits.

“We experienced additional cutbacks on allowances in November, as a result people with disabilities cannot have Christmas dinner this year,” said president of Cyprus Confederation of Disability Organizations (Kysoa) and Coordinator of the Cyprus Disability Alliance Christakis Nicolaides.

“Many people with disabilities received a benefit for decades. The state has suddenly reduced their €1,000 allowance to €150 and now people are desperate.”

Kysoa’s president also brought up the issue of socioeconomic inclusion. “More than 80 percent of people with disabilities are unemployed,” he said.

The delegation will meet the president and ministers on December 18.

US expected to lift arms embargo on Cyprus by Thursday

MP calls on colleagues for action over NPLs