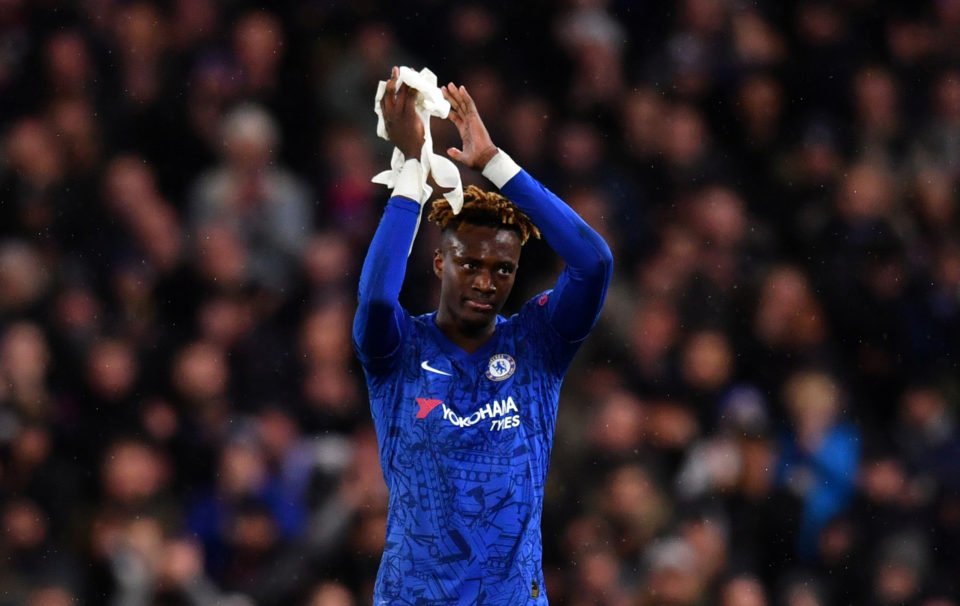 Chelsea's Tammy Abraham applauds fans as he is substituted off

Chelsea clinched their place in the knock-out stage of the Champions League with a 2-1 win over Lille on Tuesday, secured by first-half goals from Tammy Abraham and captain Cesar Azpilicueta.

Chelsea, who needed a win to make sure of qualification, had gone five Champions League games at Stamford Bridge without a victory, their longest such run at home in the competition.

They were in charge for almost the entire game against Lille who were already condemned to the bottom spot of Group H and fielded an under-strength side.

After dominating the opening proceedings under a downpour, Chelsea took the lead in the 19th minute when U.S. striker Christian Pulisic darted forward to feed Willian and the Brazilian’s cut-back cross was turned in by Abraham.

The Londoners doubled their lead in the 35th minute when Azpilicueta shook off his marker to score with a close-range header from a corner by Emerson.

Former Chelsea striker Loic Remy pulled a goal back for Lille in the 78th minute when his shot went in off the under-side of the bar, setting up a nervous finish for the hosts. Remy wasted a chance to equalise when he shot straight at Chelsea goalkeeper Kepa Arrizabalaga in injury time.

The result meant all four English teams in this season’s Champions League – Liverpool, Manchester City and Tottenham Hotspur, as well as Chelsea – have reached the last 16 of the competition.

There was further good news for Chelsea as they welcomed back central defender Antonio Rudiger who had previously played only 45 minutes this season due to injuries.

Cypriots say happy to stay in the EU

UEFA turn down request for ‘rainbow lights’ in Munich