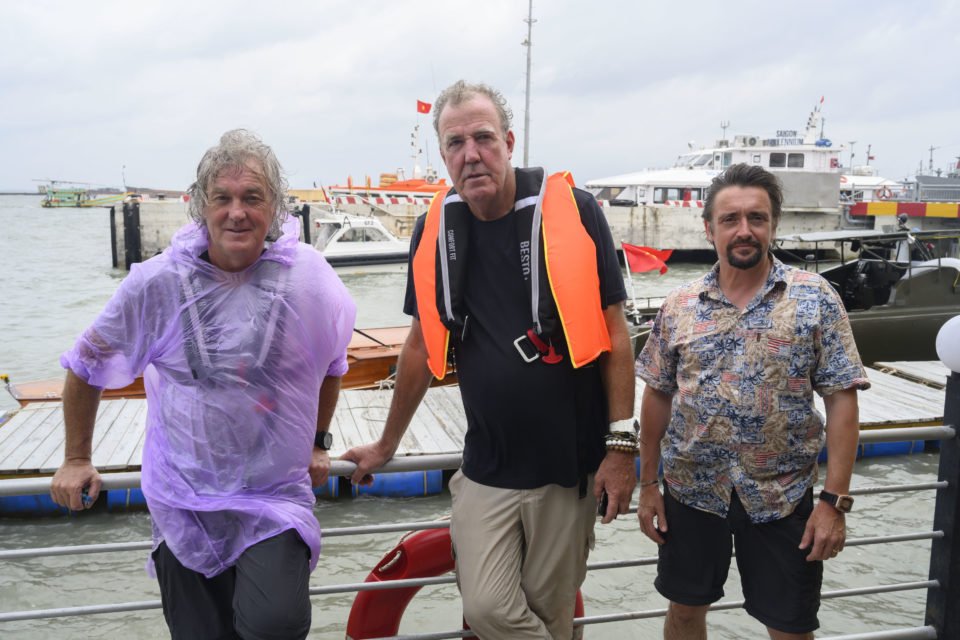 The Grand Tour Presents: Seamen is the first in a new series of feature-length specials following the adventures of Jeremy Clarkson, Richard Hammond and James May. Georgia Humphreys hears from Clarkson about their dramatic journey across Vietnam and Cambodia – and finds he’s as divisive as ever.

Jeremy Clarkson is finally willing to admit that climate change is real.

The veteran broadcaster, widely known for his cynical musings on the subject, came to the realisation whilst filming The Grand Tour Presents: Seamen, in which he, Richard Hammond and James May swap cars for boats.

The 59-year-old was in Cambodia, trying to navigate the Mekong river system from Siem Reap to Vietnam, when he discovered that one lake had shrunk until it was barely knee-deep.

“We knew before we set off that there was a problem with the water, but there was nothing we could do,” recalls the Doncaster-born father-of-three.

“It was too difficult to shift an operation that size around.

“I couldn’t quite get my head around a lake that size, you could jump off your boat in the middle of it and not even get your knees wet. You see those houses, on the stilts, with no water there. And it should have been pouring it down all day long.”

“I was never going to sit in the studio and say, ‘Oh, this is climate change.’ How do we know? We haven’t seen it,” he follows. “But then, you really see it.”

However, Clarkson – who hosts ITV’s Who Wants To Be A Millionaire?, and is also launching a new farming TV show for Amazon Prime next year – doesn’t want to “preach” to viewers.

“If you want to be preached at, listen to Sir [David] Attenborough,” he scoffs.

“Nobody wants to sit down in front of the television and have someone go, ‘Don’t do this and don’t do that’. That’s what politicians do. I’m not a politician.

“There is global warming; we saw the evidence of it. But there’s nothing I can do, I’m not a scientist.”

Does he try to offset his carbon footprint?

“I’m a farmer, I plant thousands of trees a year,” retorts the presenter, who runs his own 1,000 acre working farm near Chipping Norton in Oxfordshire

“So, I won’t take a lecture from [Swedish environmental activist] Greta Thunberg, who does sweet f*** all, waves her arms around.

“No, I can sit and drive as many Range Rovers as I want, because I’m completely carbon negative.”

Clarkson, Hammond, and May fronted BBC car show Top Gear together for 11 years.

But, in 2015, Clarkson was dropped by the channel after he punched a former Top Gear producer (he reportedly flew into a rage when told he couldn’t order a sirloin steak after a day of filming).

May and Hammond also left, and a year later, The Grand Tour launched on Amazon Prime Video.

The last three series have featured episodes with a live studio audience in a tented studio. But for the fourth, that format will be scrapped in favour of more road trip “adventure specials”.

Starting with The Grand Tour Presents: Seaman, in which the trio choose their boats in the usual way they choose their cars, with their own off-the-wall rationale.

May’s ride is a classic 1939 wooden river cruiser, so he can live out his canal holiday fantasy dream.

All three vessels were certainly put to the test, as the film ends with a voyage across some seriously treacherous waves.

Hammond and May seem genuinely terrified at points, while Clarkson, who reaches the end first, seems more unfazed.

“It wasn’t bravado, honestly,” he professes.

“I’ve been in some fairly rough seas in the past, in relatively small boats, and I felt that my boat was weirdly rather good, to say it had been thrown together in Vietnam at short notice and on a shoestring.

“But I was unaware of what was happening to James and Richard and, much more importantly, to the camera crews. Let’s not forget it subsequently transpired four local fishermen drowned just there that day…

“There’s always a camera crew; whatever you do, they’re always there. So to get to the end, there was no crew, and I thought, ‘That’s peculiar’.”

“So, it was a slightly shell-shocked ending. I did two versions, when James got off his boat, I said, ‘Well, there we go, James has survived, and on that terrible disappointment…”

That sort of banter – they constantly wind each other up – is a huge part of The Grand Tour’s appeal (and it doesn’t stop off screen).

After all, they often know exactly how the others will respond to something they say, having filmed together so intensely for many years.

“I saw them a damn sight more than I saw my children for a very long time,” quips Clarkson.

But they had a much longer break than usual this time between filming series together.

“I wondered how it would be when we met at the airport. I thought, ‘What is this going to be like?’ And, within 5 minutes, we were telling exactly the same stories as we’ve told a hundred times before – and then not noticing because we’re all old.

“James always goes, ‘Oh, I hate them so much’, but that’s why he’s got no friends; he doesn’t really. None of us hate each other, it’s just we don’t see each other when we’re not doing things together. But when we are doing it, god almighty we laugh a lot.”

Witty Clarkson is known for being – how shall we put this? – very opinionated.

Asked if he would ever consider carrying on with The Grand Tour if May or Hammond were to leave, he can’t resist a jibe at the various revamps of Top Gear (the latest presenting line-up is Chris Harris, Paddy McGuinness and Freddie Flintoff) since his departure.

“I can’t think of a programme when they’ve tried to make three people work, as a unit, from scratch…” he ponders sarcastically. “I don’t think anyone’s done that.”

“It would be very difficult,” he continues more sincerely. “I’m fairly confident, after all these years, that it works because I’m loud and bombastic and shouty, and James is very slow and autistic and Richard’s the chirpy little Brummie, who doesn’t like going abroad. And that’s what it is really.”

Akinci leads polls in the north

How to cheaply transfer business from the British Virgin Islands?