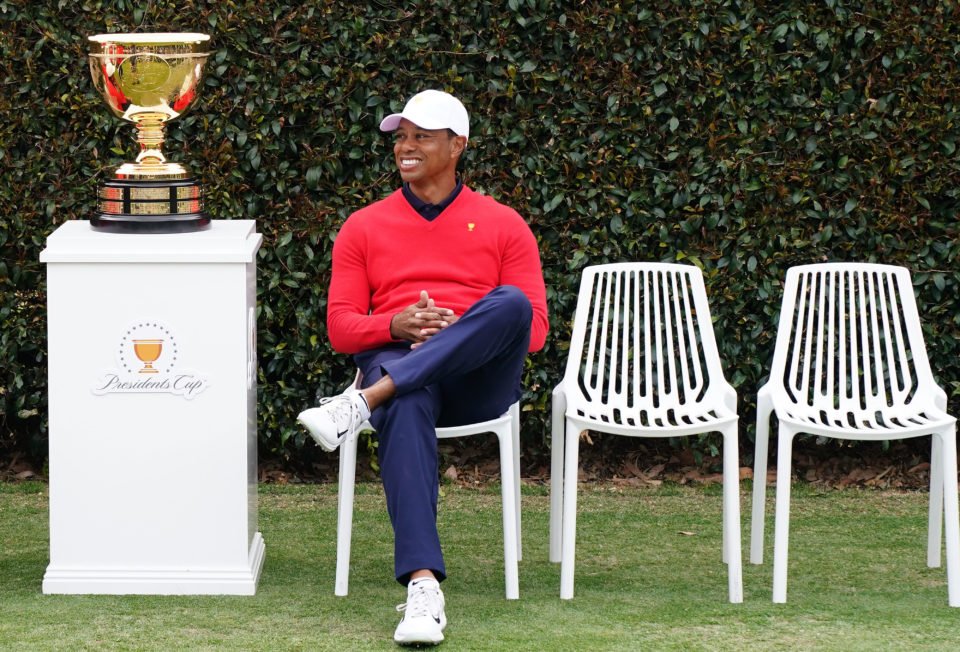 A biennial tournament that has struggled for relevance under a heavy weight of American supremacy will roar back into life when Tiger Woods returns to the Presidents Cup as a playing captain at Royal Melbourne this week.

The 15-times major champion missed the 2015 tournament and was a non-playing assistant two years ago when Steve Stricker’s United States steamrolled the Internationals 19-11 at Liberty National.

Woods, though, used one of his four captain’s picks on himself and will be front and centre at the famed sandbelt course, calling the shots in the locker room and out on the fairways as the visitors bid for an eighth straight title.

Now 43, Woods may not take a big playing load while juggling management duties but his presence is a bonanza for organisers and certain to bring huge crowds flooding to the usually sleepy bayside suburb of Black Rock.

It also spells trouble for an Internationals team short on quality and experience that appears ill-equipped to end the U.S. tyranny.

With 10 Americans in the world’s top 20 compared to just Adam Scott for the Internationals, the U.S. might have little need of a seasoned Presidents Cup campaigner to get the job done.

They have exactly that in Woods, however.

He played the course in 1998 when the U.S. suffered their lone Presidents Cup defeat and returned 13 years later to roll in the winning putt at the 2011 tournament.

“On paper, we certainly have the advantage in the world rankings,” Woods said last month.

Webb Simpson was also part of the 19-15 win in 2011 and can offer tips to his younger team mates.

The youthful Internationals have seven debutants compared to five for the visitors and will be looking to fully exploit every advantage they can muster.

They will lean heavily on captain Ernie Els, who set the course record at Royal Melbourne’s composite layout when he shot a 12-under 60 in 2004 and counts the 1998 and 2011 tournaments among his eight Presidents Cups as a player.

The team’s three Australians — Scott, Marc Leishman and Cameron Smith — also know their way around the sandbelt but they are well aware that local knowledge counted for little in 2011.

Four of the five Australians in the 2011 Team International bombed in front of home fans, with Robert Allenby infamously blaming his playing partners for his failure to earn a point.

Once heavily stacked with Australians and South Africans, the team representing the world outside the Ryder Cup nations has a more cosmopolitan look this time round.

Chile’s Joaquin Niemann, Mexican Abraham Ancer and Li Haotong of China will all represent their nations for the first time at the tournament, along with Taiwan’s CT Pan.

Els has been at pains to build camaraderie for the team and coaxed many of them Down Under early to compete at the Australian Open in Sydney over the weekend.

All of the U.S. team barring Dustin Johnson warmed up at Woods’s charity invitational, the Hero World Challenge, in the Bahamas before making the long-haul flight to Melbourne.

The U.S. suffered a considerable blow when Brooks Koepka was a late withdrawal due to injury, while one of his predecessors as world number one, Jason Day, pulled out of the International team with a back problem.

On paper, the Americans should have more than enough firepower to extend their winning streak but the strange alchemy of team events can do unusual things.

Most of Team International are at least free of the scars of past thrashings. If they start well and fire up an Australian crowd who proved far too polite to the Americans in 2011, they could make a decent contest of it.

Pan described the Internationals as young and “fearless”.

“We have a great opportunity and plus we have a home advantage,” he said. “Obviously, history tells a lot, but what we are looking at is our future.”

Ferguson remains in charge for Everton at Man United