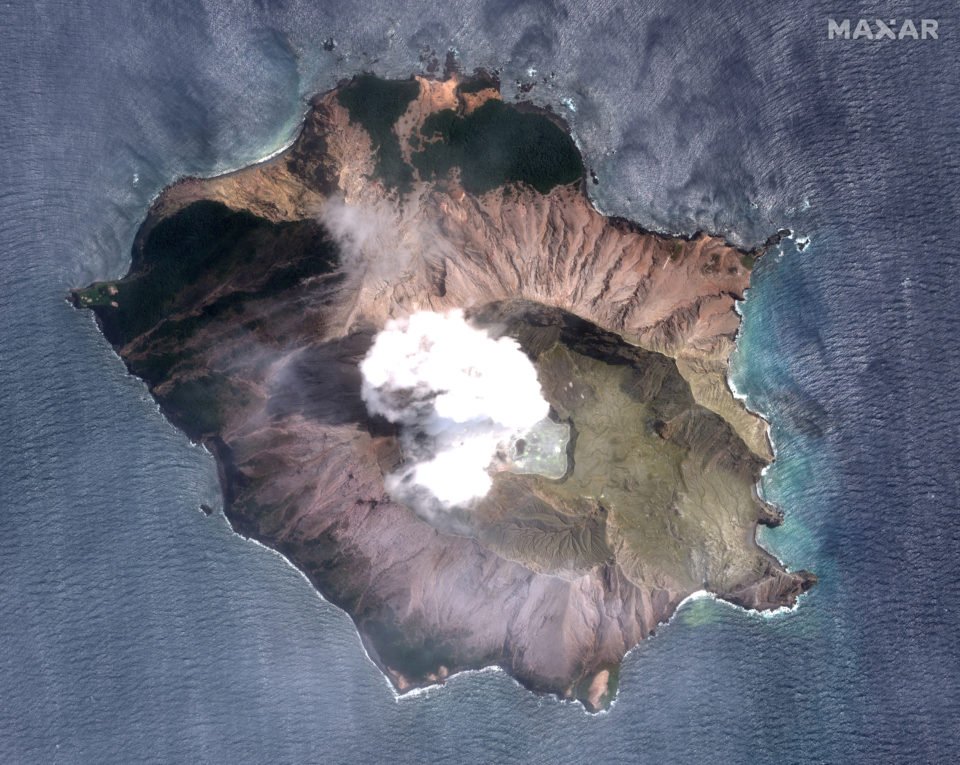 A satellite imagery of the White Island volcano, also known as Whakaari, taken on December 11, 2019 following its eruption in New Zealand. Satellite image ©2019 Maxar Technologies/via REUTERS ATTTENTION EDITORS - THIS IMAGE HAS BEEN SUPPLIED BY A THIRD PARTY. MANDATORY CREDIT. NO RESALES. NO ARCHIVES. THE WATERMARK MAY NOT BE REMOVED/CROPPED

WHAKATANE, New Zealand, Dec 11 (Reuters) – Increasing tremors on a volcanic island in New Zealand on Wednesday prevented the recovery of the bodies of eight people thought to be left on the island, two days after an eruption engulfed dozens of tourists in steam and hot ash.

Six people were killed in Monday’s explosion at White Island, which lies some 50 km (30 miles) off the mainland, with another eight missing and presumed dead and 30 injured.

Authorities monitoring the uninhabited island said conditions were worsening and there was now a 40-60% chance of a massive eruption similar to Monday in the next 24 hours.

A plume of smoke could still be seen coming from the island.

“I’ve spoken to many of those involved in the operation and they are very, very eager to get back there, they want to bring people’s loved ones home,” New Zealand Prime Minister Jacinda Ardern told Reuters.

RISKS TO BE CONSIDERED

Police said the safety of recovery teams was the priority and are awaiting advice from experts on when they could access the island. That has prompted some criticism authorities are being too cautious.

“We cannot put other people in jeopardy to go out there until we’re absolutely certain that the island is actually safe,” Acting Assistant Commissioner Bruce Bird told a media conference in Whakatane, the town that is an access point for tourist trips to the island.

There were 47 people on White Island at the time of the eruption. Twenty-four of those were from Australia, nine from the United States, five from New Zealand, four from Germany, two each from China and Britain and one from Malaysia.

A mother and daughter have become the first Australians to be named as victims, media said on Wednesday. Brisbane woman Julie Richards, 47, and her daughter Jessica, 20, had been confirmed dead, family friend John Mickel told Sky News.

Aerial surveillance has detected no signs of life on the island, where at least one tour group was captured on automated webcams in the crater just a minute before the eruption.

Ardern said the primary focus was on caring for some 30 people who were injured and were being treated for burns at several hospitals around the country.

Of the 30 injured, police said 25 are in a critical condition, and the other five were classed as stable but serious.

“Our absolute focus at the moment is ensuring we have the very best care for those who are injured,” Ardern said in an interview at her office in Wellington’s parliament, where the country’s flag was flying at half-mast to respect victims of the tragedy.

“I do understand that many have very critical injuries.”

The death toll from Monday’s eruption rose to six after one victim died in hospital on Tuesday.

One of the private helicopter operators who landed on the island after the eruption and carried survivors back to the mainland said he thought conditions had been favourable and a recovery operation could be completed in about 90 minutes.

“For us, it’s 20 minutes to get out there. We could load those folks on and be back here in an hour and a half,” pilot Mark Law told the AM show on Three television.

“I know where they all are, and the conditions are perfect for recovery in my mind.”

Daily tours bring more than 10,000 visitors to the privately owned island every year, marketed as “the world’s most accessible active marine volcano”.

GeoNet raised the alert level for the volcano in November because of an increase in volcanic activity. The alert level was increased further after the eruption, and remains elevated.

Our View: Government actions don’t back its words