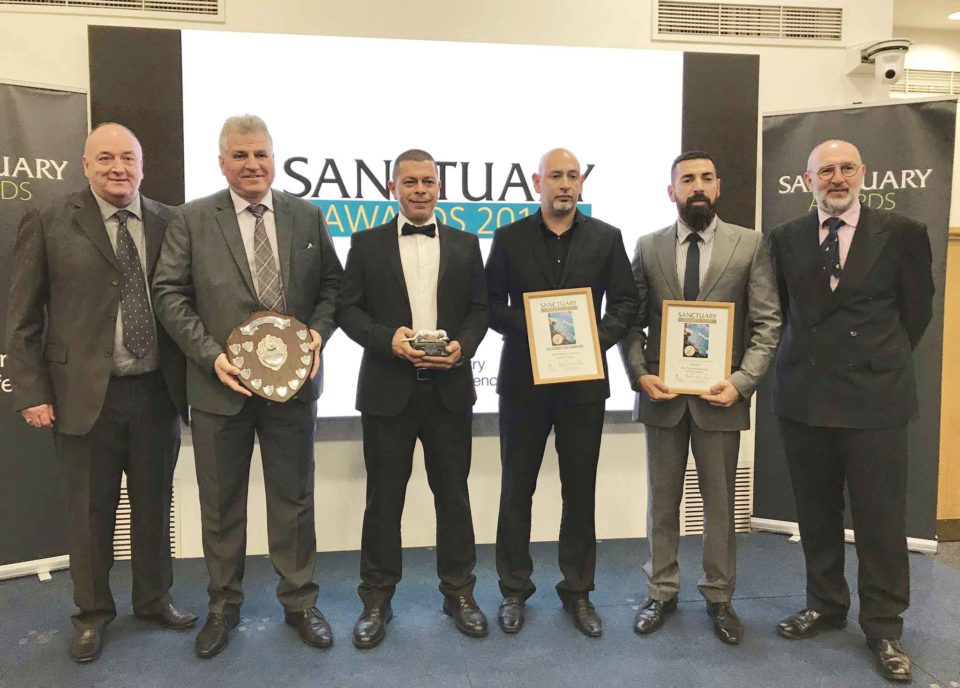 The Sovereign Base Area Police’s Community Action Team (CAT) have been awarded two of the most coveted environmental awards across defence for their work in almost eradicating bird trapping within the SBAs.

The anti-bird trapping team flew back for a ceremony in the UK last weekend to receive the prestigious Sanctuary Magazine award in the Best Environmental Project category.

But whilst there, they were also presented with the Silver Otter award, which is given to the outstanding individual or group across all five judging categories, which also included sustainability, heritage, utilities projects and individual contribution.

Speaking after seeing his officers return from the UK with the extra hand luggage, SBA Police Chief Constable, Chris Eyre, was not surprisingly overjoyed with the work of his team.

He said: “Since 2017 the Administration has changed its approach to illegal bird trapping and invested heavily in technology and equipment to improve the SBA Police’s ability to identify, target and incapacitate bird trappers.

“Legislation and enforcement policies have been changed to increase the penalties, increase the consequences for those caught trapping and maximise the Force’s ability to bring offenders to justice.

“The removal of 90 kilometres of illegal irrigation from Pyla ranges also made it harder for the trappers to operate but all of these changes were dependent on the SBAP CAT Team identifying the criminals involved and using their enhanced technology, equipment and powers to disrupt or detect the offender.

“They have shown immense resilience, courage and determination to achieve this success. They have worked countless night shifts in rural areas facing threats and violence from trappers determined to continue their offending and willing to use force to evade capture.

In recent weeks, environmental groups such as Bird Life Cyprus and the Royal Society for the Protection of Birds (RSPB) have been vocal in their support of the work undertaken by the CAT team and according to Inspector Nicos Alambritis, who heads up the unit, it has been a hugely challenging task but also a collaborative effort to tackle the criminal activity.

He explained: “It was very challenging for the team to get bird trapping under control and we were faced with some serious criticism at high levels originally.

“When I took over the team, we sat down and identified new methods and ideas and together with the subject matter experts we agreed a plan which was implemented from A to Z and brought the desirable results.

“The use of technology such as the drones, covert surveillance cameras and the new legislation which provided heavier punishments and fixed penalties, played a vital role in the success during the last three years.

“Of course, the collective teamwork and effort from all of our internal organisations and external partners like Bird Life Cyprus, the RSPB, the Game Fund and the Committee Against Bird Slaughter, have all played a crucial role in the success too.

“I believe we have an excellent partnership because we are working for the same purpose and this is evident from the results.”

And in paying tribute to the team that implements the enforcement programme on the ground, he said: “I am very proud to see our achievements recognised through these awards. Most of all I am very proud of my team members who are all working unsocial hours in a difficult environment, facing threats and violence from trappers and poachers.

“But despite all the difficulties they are facing, they are always on the front line, giving their best.”

Christmas with the Cyprus Symphony Orchestra