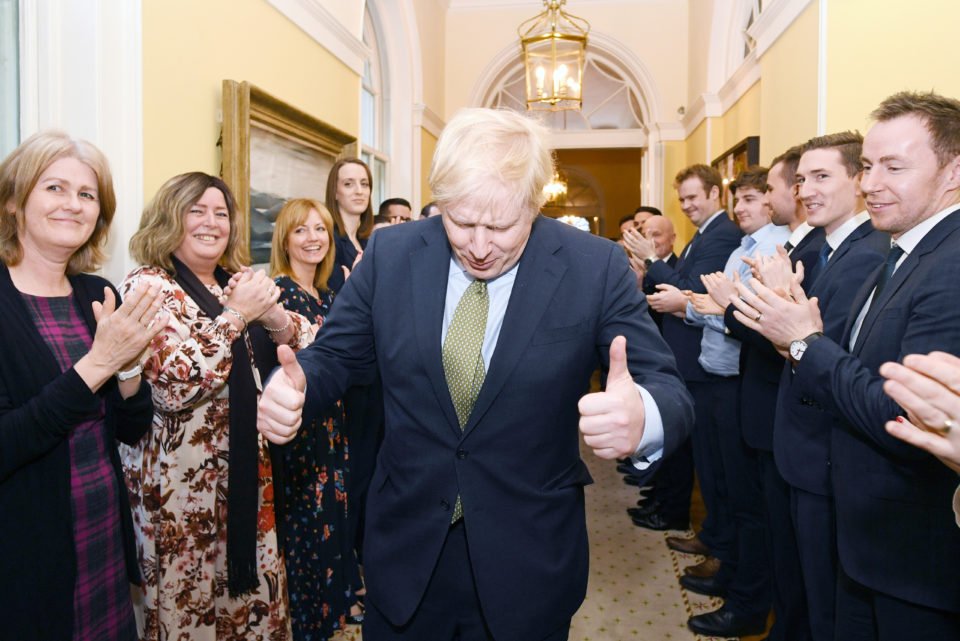 Britain's Prime Minister Boris Johnson is greeted by staff as he arrives back at Downing Street, after meeting Queen Elizabeth and accepting her invitation to form a new government after the Conservative Party was returned to power in the general election with an increased majority, in London, Britain December 13, 2019. Stefan Rousseau/Pool via REUTERS

After all the arguments and all the mass marches, opponents of Brexit faced a stark truth on Friday after Prime Minister Boris Johnson’s election landslide: there will be no second referendum and divorce from Europe is inevitable.

With the Conservatives set to win their largest parliamentary majority since 1987, Johnson will be able to push his divorce deal through parliament, allowing Britain to leave the EU next month.

It will be Britain’s most significant geopolitical move since World War Two.

Some supporters of another Brexit vote blamed themselves for the crushing defeat. The main organisation campaigning for a second referendum imploded, while the leader of the main opposition Labour Party was ambivalent, pledging to stay neutral in any other vote.

“I am distraught, and like everyone else in the remain community wish we had more competent representation,” said Mike Galsworthy, an anti-Brexit campaigner, who was sipping a whisky before going to bed after seeing the exit polls come in.

The 2016 referendum on EU membership has been the most polarizing issue in recent British history, crystallising divisions between cities and towns, young and old, the winners of globalization and those left behind.

For many pro-Europeans in Britain, another referendum represented the best chance of ending the turmoil and political paralysis. If they had united into a single political force, they may have stood a chance of overturning the result.

In addition to their own shortcomings, so-called “remainers” were outmanoeuvred.

Over the past three years, support for remaining in the EU has led in almost every opinion poll, prompting some of the largest street protests in modern British history. Parliament twice forced Brexit to be delayed.

But the main opposition parties failed to work together to forge a functional cross-party alliance, mystifying millions of Britons.

While the Conservatives consolidated the vote of those who want to leave the EU, building a coalition of pro-Brexit voters across regional and class lines, campaigners for another referendum struggled to win converts or agree on a unified plan.

After his crushing election victory, Johnson said “all those miserable threats” of a second referendum were over. He told one protester – who wears a hat with the blue and gold flag of the EU and yells “stop Brexit” at politicians outside parliament – that it was time to retire.

“I say respectfully to our stentorian friend in the blue 12-star hat that’s it’s time to put a sock in the megaphone and give everybody some peace,” he said.

Key to the “Remain” camp’s defeat was Labour’s refusal to join an initiative aimed at encouraging tactical voting, whereby people back a candidate in order to block another rather than out of genuine support.

In London seats such as Kensington, Wimbledon and Chipping Barnet, the Conservatives narrowly won after Labour and the pro-European Liberal Democrats split the anti-Brexit vote.

By contrast, the newly created Brexit Party agreed not to run against Conservatives in about half of constituencies to avoid diluting the pro-Brexit vote.

Many campaigners said the fate of their movement was inextricably linked with Labour leader Jeremy Corbyn, the least popular opposition leader in living memory and a veteran opponent of Britain’s EU membership.

Other campaigners blamed strategic errors by the opposition, such as agreeing to a snap election when the prime minister was trapped in parliament, unable to pass his Brexit deal unamended.

Johnson got the election he had sought when the opposition parties’ united front against a vote broke.

Gina Miller, a prominent campaigner for a second referendum, was among those accepting there was no way back.

“There is certainly not another vote,” she said, adding that Brexit would “get passed as an act of parliament, it will then be ratified as an international treaty and we will be out”.