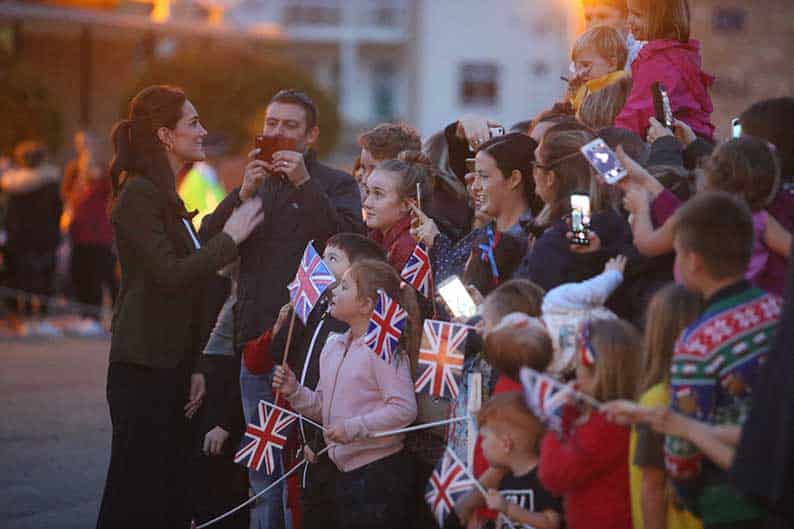 FILE PHOTO: The Duchess of Cambridge greeted by expats at RAF Akrotiri just over a year ago

IN THE wake of the general election in the UK, British nationals living in Cyprus on Friday said they now see Brexit as a certainty.

Victorious Boris Johnson and his Brexit government will lead the UK out of the EU on January 31, 2020, after his staggering election landslide.

The Conservative Party’s Commons majority is the largest since Margaret Thatcher won a third term in 1987, and Boris Johnson has promised to deliver Brexit.

Brexit and its consequences are of concern to the five million or so British citizens who live outside the UK, including the 70,000 British expats who live in Cyprus. This figure includes a number of people that spend time both on the island and abroad. Paphos district is home to the largest British expat population on the island.

Many voted in the election and everyone that the Cyprus Mail spoke with, whether they were eligible to vote or not, offered an opinion.

A spokeswoman for the UKCA said that many of its members had voted, but mostly “didn’t know which way to go”. Many did not want Brexit to happen.

“It seemed like a foregone conclusion that Boris would get in. He gives good chat. But all of the politicians make promises, I don’t think people really knew what to do. I don’t want Britain to leave the EU, but it’s going to happen now,” she told the Cyprus Mail.

Steve, a painter and decorator in the UK, has just moved to Cyprus with his family to live, and backed Jeremy Corbyn. He thinks voters believed the “lies peddled about the Labour leader”.’ Of the result he said: “It’s all utterly depressing and I believe there are very stark times ahead. The media decimated Corbyn and made him effectively unelectable. I’m glad I moved here, I came with my family because of Brexit. I thought this result might happen.”

Alexander 77, voted to remain in the EU in the 2016 referendum, but recently changed his mind and backed Johnson and the Conservatives to ensure that Brexit happens. He voted by post and sent his ballot paper in using the recorded delivery service, even though the return envelope was postage paid, “to ensure it got there in time”.’

“My opinion changed after France and Germany wanted to create a united states of Europe and a common defence force among other things. I have my MEU3, which means I have permanent residency here so I am not worried.”

However, he voiced concerns over his UK state pension, and that he hoped Johnson would undertake any negotiations to ensure it could be paid in Cyprus, and quickly.

Kate, a 43-year-old living in Peyia with her family, returns to the UK regularly and voted by post for Johnson. She is pleased with the outcome.

“I don’t like Corbyn at all but I am on the fence concerning Brexit. It’s over but not over yet, I’m really upset that it’s dragging on for so long, it’s got to come to an end.”

Permanent resident Richard, a retiree living in a Paphos village welcomed an end to the uncertainty and that the possibility of a second referendum has now been quashed, although he voted to stay in the EU. He noted that this was the reality of democracy.

“I just couldn’t bring myself to vote for Corbyn, although I don’t like Johnson much either, a rock and a hard place comes to mind. I am fearful of what will happen now,”

His biggest concerns are how the move will affect travel and if it will affect his pension.

Local radio station Rock FM saw listeners participate on the Breakfast Show’s ‘Have your say,” and all expressed relief that the outcome did not result in a hung parliament.

“I am glad that Brexit can now get underway, we should have left the EU a long time ago, but I think it was a vote against Jeremy Corbyn and not for Boris Johnson,” Paphos listener Geoff said.

Paul said he was pleased that at last a decision had been made, whereas listener Phillipa described the outcome as “terrible”, as she wanted to remain in the EU.

“Brexit is now unstoppable and the problem is, I don’t think that people wanted Corbyn as a leader. I think he has damaged the labour party, which I support. I hope that Brexit doesn’t affect me or my family here. We have got all of our necessary documents, so we should be fine. Life will go on much the same I should imagine,” she said.

Our View: It will be interesting to see how Boris plans to unite a country still deeply divided

Leicester show no sign of giving up title chase