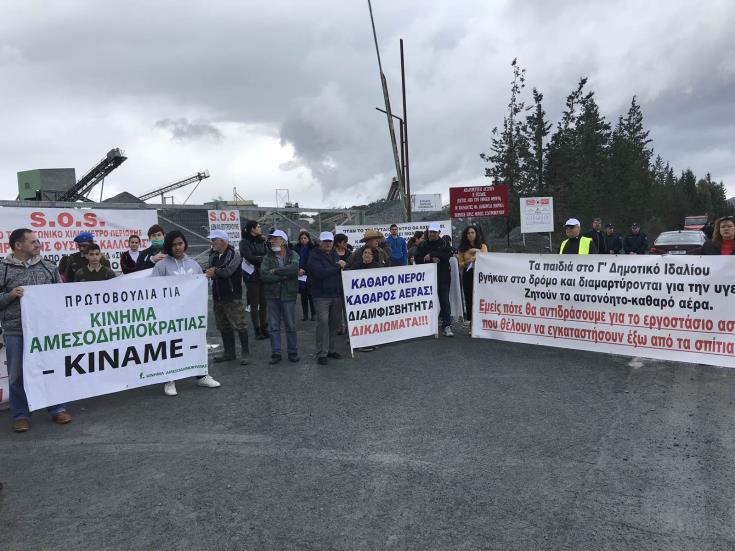 The Pyrga-Kornos initiative and friends of Stavrovouni Monastery held a demonstration on Saturday to protest a government decision to construct a concrete and asphalt plant in the area.

Protesters said the new plant will be built close to the communities and the military camp located on Stavrovouni, and will be harmful to the environment and the public’s welfare.

Monastery representative, monk Grigorios Stavrovouniotis said: “Twenty hectares of the land belong to the monastery and this is an environmental crime, which has national and religious consequences, as a monastery, which has stood here for 1700 years, and army camps are threatened.”

He added the monastery has decided to end its contract with the Skyralima Ltd company looking to build the plant and called on them to restore the land to its original state.

Ioannis Yerou, the head of the town initiative, said similar factories located in Yeri and Tseri cause breathing problems to the residents, and produce odours and dust, which are harmful.

He added: “While this is happening, at the same time a multi-ministry committee has been created to discuss moving the two asphalt plants from Dali, but in Stavrovouni and the Pyrga and Kornos area, they [the government] are doing whatever they want.”

Yerou said he wanted those in charge to “finally” take the blame for the “tragic” decision they have made.

Kiti Bishop Nektarios said the church was at the side of the monastery and the communities in the area, calling on the government to tell the company to stop its move and not build a plant so close to these areas.

“We are not against development and we do not despise any company, but development should not be done at the cost of the residents in the area.”

Police were present at the demonstration and following the statements from the officials there was a tree-planting in the area.

A minute with Anastasia Demetriadou Singer and songwriter