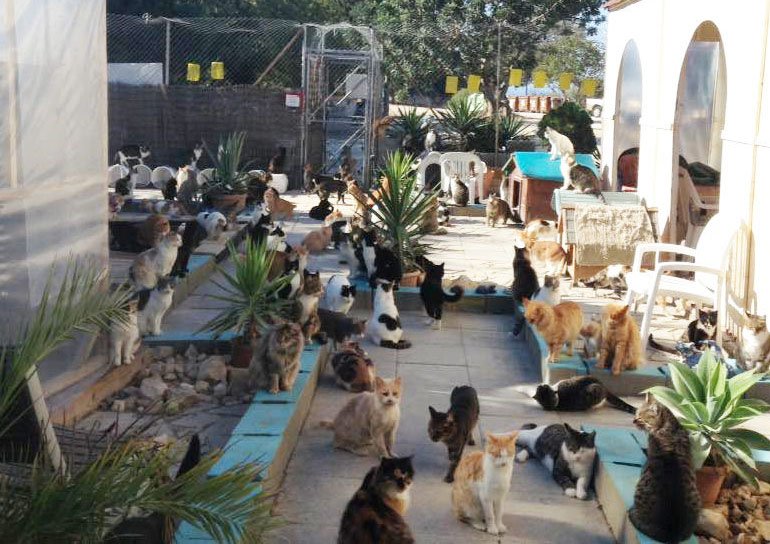 Overflowing, overstretched cat shelters are constantly lamenting a lack of government funding for neutering programmes while Cyprus’ stray cat problem has become so evident that even tourists are trying to come up with solutions.

“Like many holiday makers I’d pay a lot of money towards a neutering programme,” said Lynn Marsay from Birmingham, a concerned British tourist who recently visited Cyprus.

“I saw an awful lot of goodwill and affection towards these cats from hotel residents.

“I wish the island’s government would set up a programme and install donation points and the money collected would help fund the feeding and most importantly the neutering of the strays. I am sure the programme would soon be self-funding.”

It seems such a simple idea to take advantage of animal-loving tourists to help fund a much-needed programme to keep down the stray cat population.

Animal Party Cyprus (APC) leader Kyriacos Kyriacou told the Sunday Mail his party is in constant talks with the government.

“We are working on a project to build cat cafes in Ayia Napa, and there is an action plan for hotels regarding the installation of donation boxes with funds destined to got to cat neutering programmes.”

But he warns the issue is not straightforward for several reasons.

“Before anything is put into motion, the APC needs the approval of the hoteliers’ association and of the tourism ministry. Without their approval, there can be no official plan to collect funds destined to cat neutering programmes at hotels.”

Mostly importantly are serious concerns with some cat neutering programmes, however well-intentioned, which are illegal and can harm the animals.

Kyriacou recognises only too well the plight of the stray cat population and how it is deteriorating as numbers spiral, but he advocates caution over random cat neutering.

“The situation is getting worse and worse. I know it and it’s in front of everyone’s eyes. However, we need to be careful when talking about cat neutering. Often volunteers, despite their good intentions, create more harm than good.”

His caution is echoed by Dr Andreas Artemiou, president of the Cyprus Veterinary Council.

The issue is the irregular neutering of stray animals conducted by foreign veterinary students and some animal welfare organisations.

Artemiou made it clear that students are not allowed to practise surgery on cats.

“Only the vets registered to the national Veterinary Council are allowed to neuter cats, no one else. Nobody can come for the sake of neutering cats and practise illegally,” he told the Sunday Mail.

“Stray cats cannot be used as experiments. Students do not have the experience. I reported to the police that some animal welfare organisations have brought in students to operate on stray cats, it’s inhuman!”

He described the pictures he has seen on social media.

“In some of these pictures, the animals are being operated on camping tables covered with paper, the cats’ wounds were not even covered by a surgical cream we normally use during these procedures and the surgical tools are being disinfected in plastic bottles.

“I don’t understand why this happens. Stray cats have the same rights as the pets we have in our houses, they are not second-class animals.”

But the unregulated schemes aside, animal shelters remain overwhelmed by the sheer numbers of cats they want to help. Most work closely with registered local veterinary clinics for their neutering programmes.

Dawn Foote, from the Tala Monastery Cat sanctuary in Paphos described the difficulties the shelter faces when it comes to neutering cats.

“We get no government funding. We pay the vet we used for the last seven years for every cat neutering surgery we do, and we survive thanks to donations and to people who choose to sponsor a cat,” she told the Sunday Mail.

After the cats have been neutered and have recuperated from the operation they are returned to where they were found.

“The reason we return them is because we are reaching the maximum capacity at the shelter. We simply cannot host any more cats.

“We are doing our best. But sometimes it feels like we are fighting a problem that is too big for us. We need help and we need it soon.”