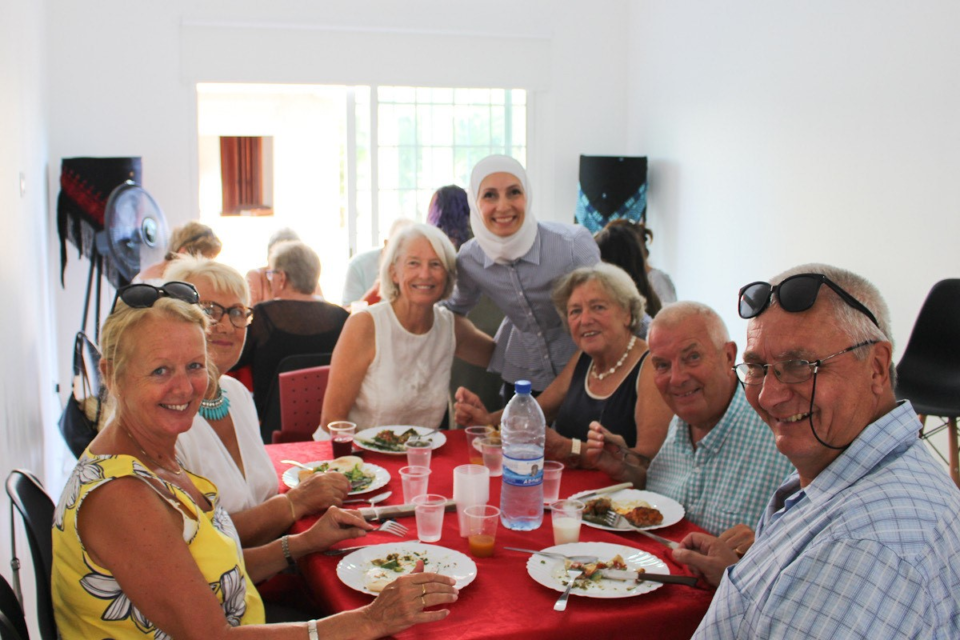 Khalil with some of the P3A

When  Jordanian Ala Khalil received ‘the look’ from a shop assistant, she decided it was time to break down cultural barriers

An inspiring woman living in Paphos is empowering Arab women and is determined to create and foster a climate of understanding between cultures. She is doing so through a number of ventures including food and education.

A withering look and condescending attitude from a staff member at a Paphos shop spurred Jordanian born, Ala Khalil, 36, to turn a negative experience into something positive. She decided to educate the community about her culture in an effort to prevent such judgemental behaviour.

“I call it ‘the look’. You are out meeting people and someone may behave as if they are at a different, higher level than you and they treat you differently from other people. This happened to me in a shop and made me feel very unconformable. But I kept going back to the shop and changed her attitude, now she knows me and it’s different. But I questioned that initial judgement. Why did she do that? Perhaps, because our heads are covered,” Khalil told the Sunday Mail.

Khalil is bright, spirited and engaging. She is president of the Women Arabic Cultural Club, Cyprus and founder of Alakadimiya Arabic Language Centre. She also organises cookery lessons focusing on Arabic cuisine and oversees another venture, ‘Joud’ catering.

Khalil has lived in Cyprus since 2009 with her husband who is half Cypriot and their children.  The pair met at university in Jordan where she studied software engineering.

Khalil came up with the idea of offering an afternoon school for Arab children to enable them to learn the language and undertake Islamic studies.

After trying to do the same with her own children at home, she believed that they needed the discipline of a classroom and books. The school has grown and now has 21 students aged from three to 16 years.

“There is a large Arabic community in Paphos, and I started being introduced to women as they brought their kids to school. As I spoke to them, I figured out that there are many well educated women here that are not doing anything with their lives, especially the refugees that come here.”

She explained that divides occur within Arabic culture and she wanted the women to come together and celebrate their common culture and not be wary of any differences.

“This is the first time that all of these women from Syria, Armenia, Palestine, Iraq, Jordan and Egyptian have all come in close proximity with each other. But now we are the women’s Arabic cultural club, we all have the same language, we are the same culture, so why not share that to build something together?”

The first meeting in 2017 was a special moment, with around 20 women from various Arab countries, speaking in different dialects and all getting on.

She was moved by the numerous stories, particularly of young women in their 20s who had been studying at university, driving, working and having a ‘proper and fulfilling life’ before arriving in Cyprus. Khalil wanted to empower them.

“I had an idea to do something together, not just to surrender and do nothing. I met two very good cooks and had the idea to introduce them to the community around us.”

And that is what she is doing.

Khalil proposed a new group called ‘Arabic cuisine cookery classes’, through the P3A, Paphos third age, a successful club that offers learning activities for residents and regular visitors to Paphos. They have over 800 members and more than 40 groups which cover a range of activities and subjects.

It is now hugely popular and sees her offer three monthly groups with different students in each. Arab women, under Khalil’s guidance, show mostly foreign residents how to cook a different meal.

Khalil explains a little about each woman and the group will discuss her country of origin, such as Lebanon, for example, and talk about the meal. It enables participants to learn the ‘correct’ image about Arab culture, she said.

“I think it’s particularly important at the moment with all that is going on in the world. People need to come into contact and get to know Arabs around them in the community and see the reality.”

Initially, some of the women demonstrating their dishes were nervous and had never interacted with men unknown to them.

“It is breaking down barriers. The first Arab lady in our kitchen was so nervous, it was her first ever meeting with people she didn’t know, and a culture she didn’t know. Where she came from most women are kept separate from men. Women gather together and the men alone or together.”

Khalil admitted that it was, ‘a little bit difficult to integrate these women’ and for them to have the ability to be around men, but now that has all changed.

“The men have also learned that when a woman raises her hand to her chest, this is a polite greeting, and means she doesn’t shake hands with any men.”

Each woman brings her own culture and favourite dishes to the classes which have now evolved into a catering initiative, ‘Joud’, an Arabic word meaning generosity. This also provides a way to generate a small income for their families as well.

“I can see the ladies have changed psychologically. This is the first chance they have to do something for themselves.”

There is no stopping her mission to educate. The latest initiative ‘Yalla Safar’ is a travel venture which saw Khalil take a group of 22 travellers from the P3A to visit Jordan in September and learn the ‘deep culture’ of the area. A second similar venture is already fully booked.

“It is a real passion for me, to educate people about my culture. My father used to recite and act out Arabic parables to me when I was a child. They stayed in my mind and I want to share this joy I feel with everyone.”

Future of gas in Asia, and what it means for Cyprus

Paphos police say they are on top of domestic violence