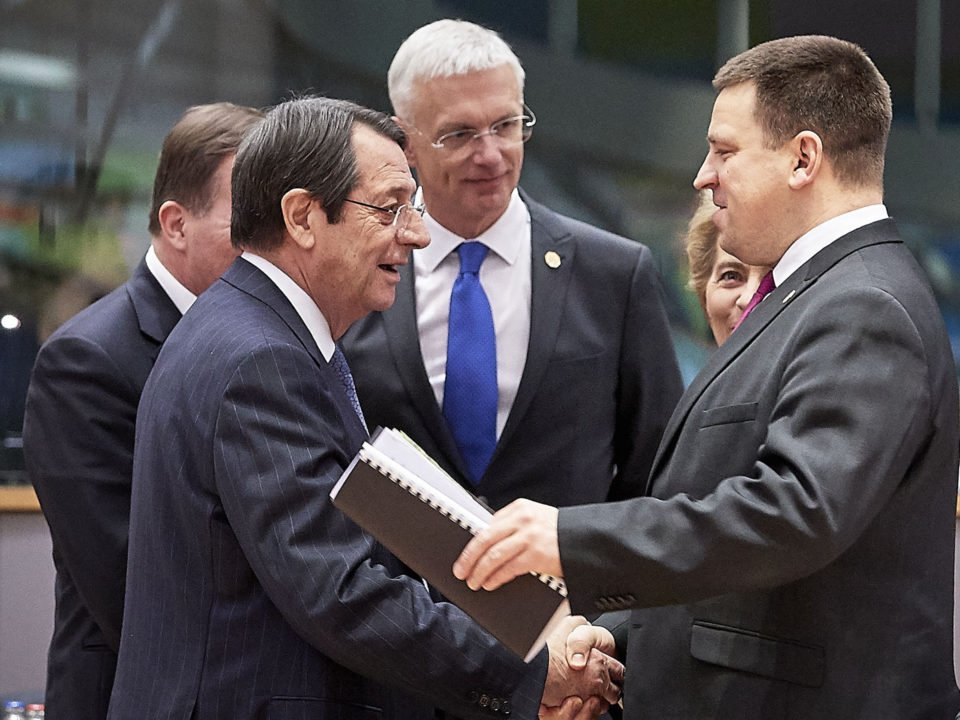 Anastasiades at the European leaders meeting this week

We are collecting declarations of support and condemnations of Turkey’s illegal drilling from the EU, just as in the past we amassed UN resolutions about the Turkish occupation. Although these have some moral import and give our politicians a sense of achievement, their practical value is questionable. For years we had been securing ‘favourable’ resolutions from the UN Security Council and our political leaders celebrated these achievements that, in practical terms, amounted to nothing, as the current situation shows.

Now, we have turned to the European Council for support and on Thursday it issued an announcement in which it “reconfirms its conclusions of 17-18 October, concerning Turkey’s illegal drilling activities in the Cyprus Exclusive Economic Zone.” (President Anastasiades’ doing according to press reports). It also took a strong stand against the Turkey-Libya MoU saying “it infringes upon the sovereign rights of third states, does not comply with the Law of the Sea and cannot produce any legal consequences for third states.”

We will probably secure a similar expression of support at the next Council assuming Turkey does not stop the illegal drilling. This is the crux of the matter. President Erdogan will not be deterred let alone stopped by condemnations and declarations by the EU, the US or any other country. As for international law and conventions, Erdogan has shown his disregard for them time and again, because he knows he can get away with anything. Nobody would stop him, for fear of alienating Turkey, which both the US and Russia are eager to keep on side.

Even the EU is treading carefully. At the news conference that followed the European Council meeting, Charles Michel, its new President, was almost apologetic when he said: “We have expressed our full solidarity with Cyprus and Greece and consider it important in the future to develop dialogue with this important country.” He added: “We know that it is important for migration especially to maintain close cooperation, but we know that at the same time it is important to have a strategic vision in the short and medium term of what we want from this important country for the future of Europe.”

It is against this background that the grandstanding of President Anastasiades and his foreign minister Nicos Christodoulides, who talks as if he represents a major power, should be examined. The trilateral alliances through which the government dangerously deluded itself it would dominate the energy game in the eastern Mediterranean, Christodoulides self-importantly declaring that Cyprus did not want to exclude Turkey, have been exposed as nothing more than PR exercises. The Greek government has expressed serious skepticism about Cyprus’ “frivolous moves,” according to a comment piece in the Athens paper Kathimerini, which said these were “dictated by the personal games of its politicians.”

The article also described the trilateral alliance of Cyprus, Greece and Egypt, which Greece was dragged into because of a sense of obligation, as a “dangerous frivolity”, which it said “Turkey turned upside down by signing a bilateral alliance with Libya,” and asked: “Where is the ‘shielding’ of national rights that the Cypriot politicians were boasting about after every monthly meeting of the trilateral?” This was not the only critical article appearing in an Athens newspaper, another urging Cyprus to “seek an honestly realistic settlement instead of dreaming of energy utopias.”

The main message of both articles was how spectacularly wrong the calculation that Erdogan would not react to what Cyprus and Greece were doing had proved. He reacted forcefully – drilling in the Cypriot EEZ and signing the MoU with Libya which put Greece on the spot – with no third party preventing him. And nobody seems interested in stopping him now. It would be very irresponsible if we dismissed his latest threats as bluffs. At least Greek prime minister Kyriakos Mitsotakis is taking them seriously and refuses to go down the path of escalation by antagonising Turkey, his government’s line being that differences regarding the seas should be resolved through dialogue.

It is a positive development that the government in Greece has drawn the line under the Anastasiades-Christodoulides brinkmanship that was never going to end well. Indicative of this change in approach was information from Brussels that Mitsotakis had turned down Anastasiades’ plan of seeking sanctions against Turkey over its agreement with Libya. It is a relief, for us in Cyprus, that the Greek government has introduced prudence and caution in dealings with Turkey, and will no longer allow Anastasiades and Christodoulides play this recklessly dangerous energy game Cyprus can never win.

Tales from the coffeeshop: Dialogue for the sake of dialogue