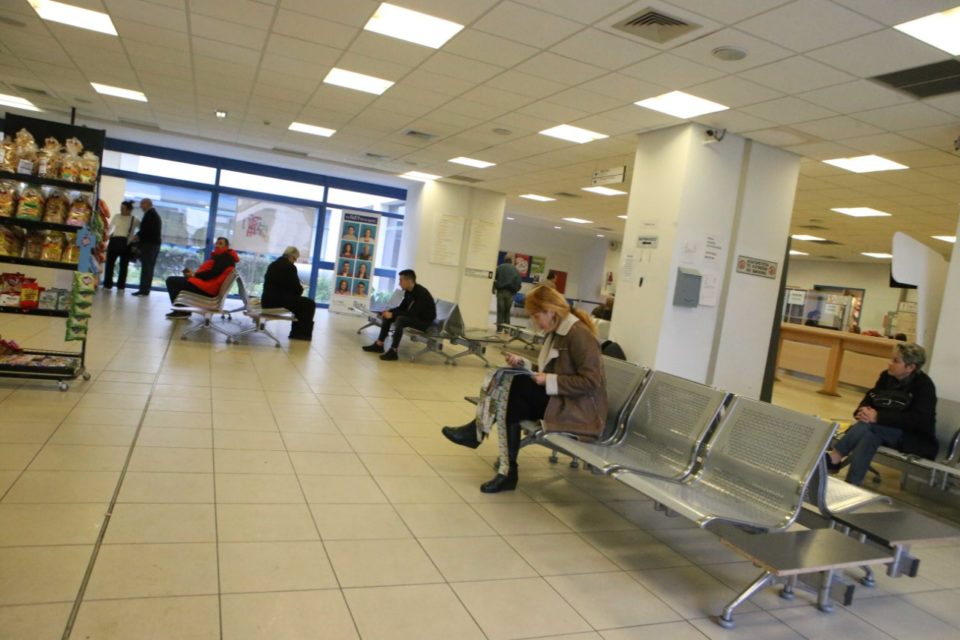 members of the public sit out the doctors strike on Friday

STATE hospital doctors’ union Pasyki was “forced to stage the three-hour work stoppage on Friday as a cry of anguish,” said the perennially angry union boss Sotiris Koumas at a news conference held to explain the cause of the medics’ anguish.

This was how he explained it. “Pasyki is made up of battle-hardened doctors, on the front line, who feel it in their skin what a public hospital means and what conditions have been created, much more for the patients, but also for those working. We were forced to stage this three-hour work stoppage because an interminable dialogue is taking place, a dialogue for the sake of dialogue.”

He was not referring to the Cyprob, although he could have been. He was referring to the dialogue which Pasyki and other doctors’ unions were having with the state medical services Okypy about pay, which had lasted five months. By Cyprob standards five months of talks would not even qualify as a dialogue let alone an interminable one.

In a roundabout way, he was saying that the cry of anguish was sparked by Okypy’s failure to satisfy the battle-hardened doctors’ pay demands, which were on an insane scale. The pay rise hospital doctors were looking for was in the region of 100 per cent. The bad-tempered Dr Koumas said this on CyBC radio on Friday morning.

He said doctors were looking at “receiving for outpatient and inpatient care services roughly the equivalent of an extra salary each month.”

THIS would not involve doing longer hours, taking fewer holidays or giving up overtime pay for working after 3pm. Public service work conditions would remain, but doctors would just be paid double for doing exactly the same work they had been doing. They also want secretarial staff to do all their admin work such as entering data into their PC, which is time-consuming and beneath the dignity of a front-line doctor.

Okypy had offered them an incentive scheme unheard of in the public parasite sector. It would give specialists 12.5% of the proceeds for visits (paid for by the Health Insurance Organisation) and 5% for medical actions such as giving a patient an injection or measuring the pulse-rate, during office hours (8am to 3pm). In the afternoon when hospital doctors are paid overtime to work, they would get 25% of proceeds for visits.

By Okypy’s calculations, this method would give hospital doctors an additional €1,000 to €1,500 each month, but Koumas and his fellow medics described this amount as a “disincentive” to work. “The mockery must end,” said vice president of Pasyki Adonis Eleftheriou, adding that the Okypy proposal “did not respect the doctors of the public sector.”

Respecting them meant doubling their pay, which would not solve any problem at the hospitals as the doctors would be paid such high salaries they would have no incentive to see more patients or work in the afternoons. Doubling doctors’ pay would be a disincentive for them to stop behaving like lazy public parasites.

SOME time ago our establishment described Gesy as a sacred cow that nobody dared criticise or say a bad word about. We omitted to mention that it is also a big cash cow for a large number of so-called stakeholders.

Nurses secured big pay rises before it even started operating, government doctors are being given extra pay in the form of allowances, while personal doctors can earn as much as €250,000 a year thanks to the smartness of the HIO planners.

The rewards of the personal doctors have become the envy of government doctors, who have been leaving state hospitals to set up their own medical practices and become rich. This has caused staffing shortages at the hospitals, giving Pasyki the opportunity to try and squeeze as much money as possible out of the cash cow in order to stop the outflow of medics.

Hospitals had lost 100 docs said Koumas insisting that “we are not seeking golden rewards.” All his union wanted was for public hospitals to be viable, he said. Doubling the salaries of all doctors seems a rather unorthodox method of securing the viability of the hospitals, not to mention the danger of this causing the Gesy cash cow to dry up.

Then we will have to deal with the patients’ cries of anguish.

THERE is hope for Gesy now that House President Demetris Syllouris, who decided to undertake a Gesy initiative – aimed at what nobody knows – in keeping with the cultivation of his image as a political sage.

Syllouris, who usually does his best work for Kyproulla when he is playing the foreign minister, touring the world, must have felt neglected by the local media even though he always takes a CNA journalist with him to report back home about his important contacts abroad. His Gesy initiative not only attracted the required media publicity but it will allow him to play the president of the republic for a few hours, something he greatly enjoys.

He has arranged a big meeting next Friday to be attended by the minister of health, party leaders, representatives of the parties, the presidents of the HIO and Okypy, directors of hospitals, patients’ groups and God knows who else. The large number of people attending guarantees the meeting will be a circus, but it was never the intention for the meeting to have anything other than publicity value for Syllouris. I just hope he has time to prepare for it because on Sunday he is flying to the UAE on an official visit and will not be back until Wednesday.

JOURNALISTS in Greece appear to have realised the real dangers posed by Prez Nik’s and his foreign minister’s attempts to pose as the big shots of the eastern Mediterranean energy game with their trilateral alliances, the myths about the East Med pipeline and their incessant boasting about raising Kyproulla’s strategic importance.

Writing in Kathimerini, Stefanos Kasimatis said: “Athens is being dragged behind the frivolous moves by Cyprus, which are being dictated, woe and behold, by the personal games of its politicians. The trilateral, to start, is a dangerous frivolity and this is now clear. Why did Athens participate? Because of obligation or awkwardness?

“… The initiatives undertaken by Cyprus, often without informing Athens in advance (as in the case of the recourse to The Hague) is a public relations campaign directed at the domestic audience and orchestrated by two politicians, aligned because of common interests. The President N. Anastasiades is in need of the shield of protection of the national issue against the financial scandals with which his government is linked, while foreign minister N. Christodoulides is the candidate to succeed him.”

KYPROULLA sent some help to earthquake-stricken Albania and Christodoulides wasted no time in taking credit for the humanitarian aid. Thanks to his initiative, civil engineers will be visiting as well a group from civil defence. As he told Tass news agency, subtly congratulating himself, the mission “constitutes a practical proof of the positive approach of the Cyprus Republic on issues of the broader region, within the bounds of our capabilities, which extends, among other things, to matters such as practical solidarity in the case of humanitarian crises and natural disasters.”

THE STATE budget for 2020 was approved on Wednesday with the votes of Disy, Diko and Solidarity. Elam, Edek, Lillikas, Akel and the Greens voted against it. The first three, however, to underline their uber-patriotism all approved the defence budget, which is ironic considering there is no bigger waste of the taxpayer’s money than what is spent on defence. The patriotic parties, however, believe that money spent on defence is money well-wasted. You could not waste the taxpayer’s money on a worthier cause. Defence is even above Gesy in the sacred/cash cow stakes.