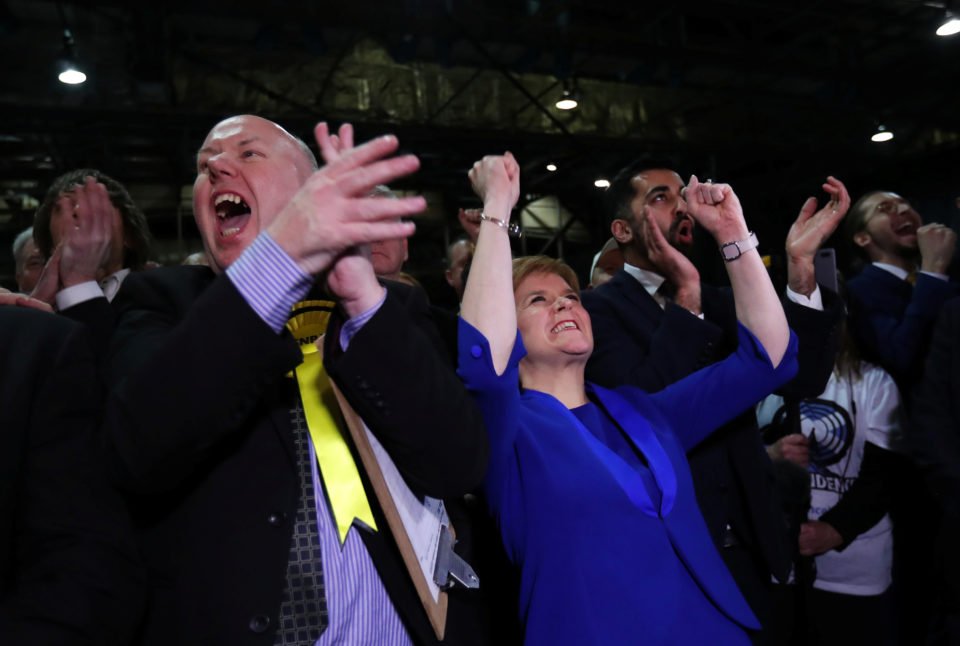 It is Friday, December 13, 2019 and Boris Johnson has just won the UK general election with a landslide. The weather on election day did not bode well for the Labour party. It was cold and it was raining and a cold wind blew across the country as the British braved the elements to make sure they left the EU at the end of January 2020.

Not to be outdone, Scotland voted for independence after Britain leaves the EU.

Northern Ireland also voted to drift away and in time join the Republic of Ireland and the EU via that route.

Wales bucked the trend, but it was the Labour heartlands of the north of England that voted overwhelmingly for Boris Johnson with eyes wide shut on its effect on the union with Scotland and Northern Ireland.

In the end, Scotland is unlikely to be denied the right to self-determination; Northern Ireland and the Republic of Ireland already have the right under the Good Friday agreement.

The Scots exercised their right in the independence referendum of 2014. A majority voted to stay part of the UK, but the clamour for another referendum has now re-emerged as official policy after Scotland voted overwhelmingly for the Scottish National Party on a clear manifesto promise to remain in the EU.

Under the UN’s International Covenant of Civil and Political Rights all ‘peoples’ have the right of self-determination. Many problems in the world including ours derive from the interpretation of the word ‘peoples.’

There are two interpretations. One is based on a territorial understanding of the word and the other is based on ethnic and cultural identity.

The territorial meaning is independent of the ethnic and cultural composition of the population within a country’s territory, and the identity meaning covers people who are ethnically and culturally distinct within a territory.

On the identity based meaning, however, only the people of Scotland would be entitled to participate, which is what occurred in 2014 with the consent of the British government, though probably not the sovereign.

It seems the UK parliament of the day was persuaded that owing to the ethnic and cultural differences felt by the Scots; self-determination based on identity was in order.

The political question thrown up by the SNP’s landslide last Friday is how many times and how often are a people entitled to exercise the right to self-determination. What should happen if shortly after voting in one referendum there is a material change in the constitutional and political arrangements presumed by the people to continue when they voted?

The right of self-determination in international law means that ‘peoples’ are entitled to be in charge of their constitutional and political arrangements.

In Scotland those arrangements are first that they are part of the rest of the United Kingdom. They owe allegiance to the same sovereign and their parliaments are united, though a lot of executive and legislative power has been devolved to Scotland.

Secondly, as part of the United Kingdom, Scotland is attached to the EU, but unlike England and Wales, Scotland wishes this state of affairs to continue.

At the time of the 2014 referendum there was an important legal debate in Scotland about whether she could remain part of the EU if she became independent.

The legal difficulty was that if she ceased to be part of the UK then she would cease to be part of the EU. And if she became independent and sought to reapply to join she was not guaranteed admission, as countries such as Spain and Cyprus were likely to veto her re-entry because of secessionist problems of their own – Spain with Catalonia and Cyprus with the ‘Turkish Republic of Northern Cyprus’.

What is possible is to ask if Britain’s decision to leave the EU constitutes a material change of circumstances that should entitle Scotland to a second bite at the cherry so soon after the once-in-a-generation referendum of 2014.

A material change of circumstances must be based on uncontroversial facts relevant to whether Scotland should be given another opportunity to decide her constitutional and political arrangements in line with the UN Covenant on Civil Political Rights.

Few would argue that Britain’s membership of the EU forms part of Scotland’s constitutional arrangements, or that leaving the EU amounts to a change of circumstances.

That leaves the question of materiality, by which most people understand as something they deem important in any decision-making they undertake.

It is the fact that Scotland voted overwhelmingly to remain in the EU in 2016.

There is also no doubt that the Scottish National Party was one of the most pro EU parties in the UK in last Thursday’s election and that they won 48 of the 59 seats in Scotland and that Boris Johnson who won by a landslide in England was virtually wiped out in Scotland.

So Nicola Sturgeon, leader of the SNP, is right to tell the prime minister that it is not just a question of a demand of the Scottish people but of their democratic right to self-determination enshrined in international law, even if under British constitutional law parliament at Westminster has the final say.

My guess is that if the Scots are given another referendum, they may still choose to remain part of the UK.

Yet it is the right to choose that matters, not the right to remain in the EU since that will be lost by the time Scotland votes on independence again.

And who knows, if Brexit proves the success we have all been promised, I doubt the canny Scots would vote for independence.

U.S. envoy arrives in S.Korea as Pyongyang ramps up pressure