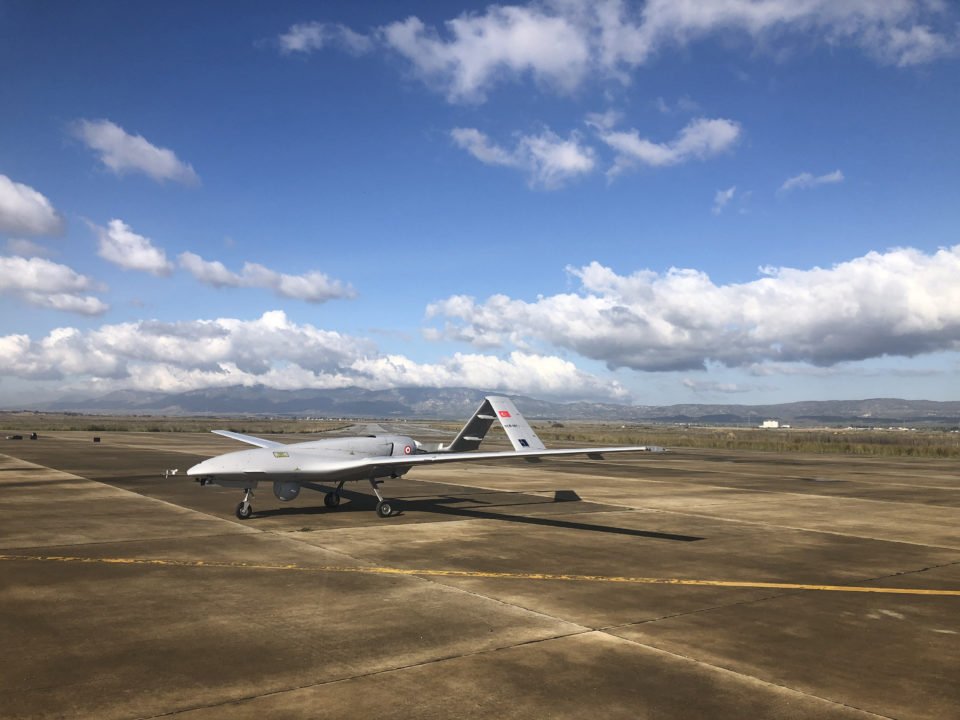 The first Turkish drone aimed at aiding the search for hydrocarbons by Ankara in the Eastern Mediterranean landed at Lefkonkio (Gecitkale) airport in the north around 10am local time on Monday after a five-hour flight from Turkey’s western province of Mugla.

The move by the Turkish Cypriot authorities to designate Lefkoniko as a base for the drones has been widely condemned on the Greek Cypriot side. The ‘TRNC cabinet’ made the decision to allocate the use of the airport last Friday for the deployment of both unarmed and armed unmanned aerial vehicles (UAVs), stepping up its moves to hinder exploration and exploitation plans by the Cyprus government.

According to Reuters, on Monday, the head of Turkey’s Defence Industry Directorate Ismail Demir said the first unarmed Turkish drone took off from an airport in Mugla and landed at Lefkoniko at 0700 GMT. It was later reported that the drone, Bayraktar TB2, had begun its first flight in the eastern Mediterranean.

Ankara has already sent two drillships to Cyprus’ exclusive economic zone, the Yavuz and the Fatih, a move that has been condemned by the international community, including the EU, most recently after Turkey and Libya’s internationally recognised government signed an agreement on maritime boundaries, angering not only Nicosia but also Athens, which accused Turkey of violating international law.

Media reports in the north on Monday cite Turkish Cypriot ‘prime minister’ Ersin Tatar saying: “Decisive steps are being taken with the Republic of Turkey. A mobility has been observed after Turkey’s agreement with Libya. There was a demand from the Republic of Turkey. For security reasons, we have convened the council of ministers on the allocation of Gecitkale airport for the use of armed and unarmed aerial vehicles.”

This was decided in view of both Turkey’s and ‘TRNC’s’ security in the Eastern Mediterranean, he said.

“The allocation was necessary because there is an urgent need for it,” Tatar added.

Asked about the existing lease agreement for Lefkoniko with businessman Asil Nadir, Tatar argued that the deal contained a ‘force majeure’.

“It is possible to take such a step by informing the other party [the businessman] in case of urgent need due to military and security issues. According to the opinion of the attorney general’s office, it is possible, and the holder of the lease agreement did not object to it either.”

Tatar said the UAVs would play a crucial role in providing support and reconnaissance for Turkish vessels in the region. “It will be easier for the UAVs to operate from Geçitkale airport due to the close distance to the areas where the vessels are operating,” he added.

Turkish Cypriot ‘foreign minister’ Kudret Ozersay was quoted in media as saying: “We could not have allowed the balance to turn to our disadvantage. We have to be aware of the bigger picture. This is not an ordinary island.” He said it was a necessary step for the safest progress of the drilling and seismic works in the area.

Turkish Foreign Minister Mevlut Cavusoglu also weighed in. He said the ‘TRNC’ and the Turkish Cypriot people had rights over the island’s hydrocarbons’ wealth.

“I have been taking steps with the aim of protecting the rights of my people. In the past, we were sitting, discussing, condemning these and sending our seismic research vessels. However now we’ve sent our drillships and changed the balance there. We will continue our determined stance to protect the rights of the Turkish Cypriot people.”

On the Greek Cypriot side, political parties condemned what they called the latest Turkish provocations.

Main opposition Akel spokesman Stefanos Stefanou said it constituted “a new challenge at the expense of our homeland”.

“It is another act of undermining peace, security and stability in the wider region,” he added.

He said the new development was a reminder that the occupation and the status quo did not remain stationery “but is sliding daily into a new phase with increased risks for our country and our people, Greek Cypriots and Turkish Cypriots”.

Socialist Edek said in a statement Turkey was deliberately creating a crisis that it could use as a bargaining tool at the negotiating table when it comes to hydrocarbons.

The answer to “Turkey’s provocative actions is to strengthen the defensive deterrent power of the Republic of Cyprus”, the party said by upgrading the National Guard’s defensive capability by acquiring modern weapons systems and by re-activating the unified defence dogma with Greece.

The municipality-in-exile of Lefkoniko also issued a statement on Monday expressing its “disgust for the latest provocative action of the occupying force”. “We call on the European Union to act appropriately to put an end to this and to other unlawful acts,” it added.

The government condemned the drone move on Saturday calling it “yet another destabilising action”.