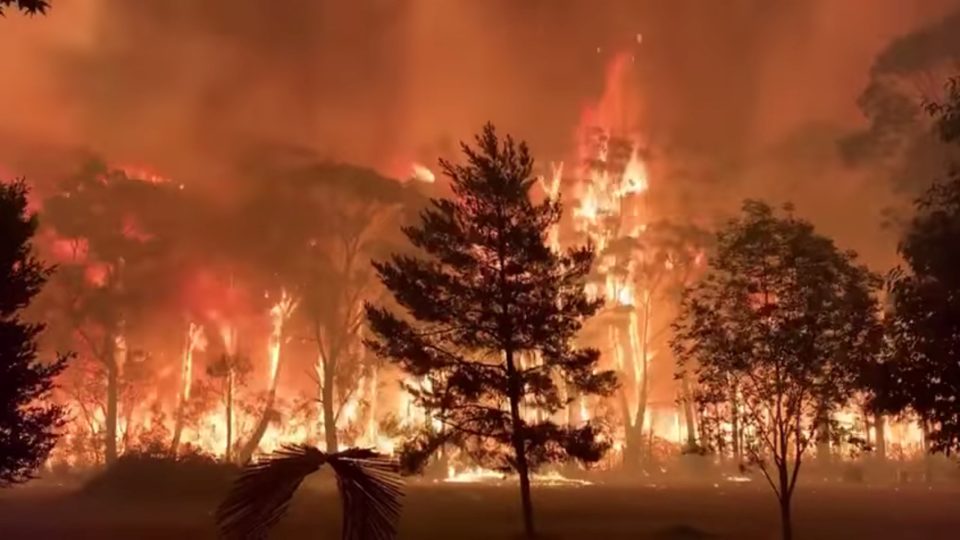 A fire blazes across bush as seen from Mount Tomah in New South Wales, Australia December 15, 2019 in this still image obtained from social media video. NSW RFS – TERRY HILLS BRIGADE/via REUTERS THIS IMAGE HAS BEEN SUPPLIED BY A THIRD PARTY. MANDATORY CREDIT. NO RESALES. NO ARCHIVES.

A 12-year-old boy in Australia and his dog have escaped a fire that was lapping his family’s farm house by grabbing the keys to his brother’s pick-up truck and driving to safety.

Lucas Sturrock was home alone on Sunday after his father and brother had gone out to fight a fire in Mogumber, 128 km northwest of Perth, Western Australia, when the blaze approached his house.

Realising the fire was approaching too fast to escape to the rendezvous point designated by his father, Sturrock grabbed the family dog and headed off in his older brother’s pick-up truck, police said.

Emergency workers found Sturrock and the dog in the truck at the side of a road, unharmed.

“It was great he had the driving skills to get out of there,” Police Sergeant Michael Daley told the Australian Broadcasting Corp (ABC).

“It is fantastic we found him and got him out of danger.”

Ivan Sturrock, Lucas’ father, said his son had learnt to drive when he was seven.

“We taught him to drive since he was about seven just in case things like this do happen and I was quite proud of him, he did exactly what we told him to do,” Ivan Sturrock told the ABC.

Lucas Sturrock is one of thousands of Australians that have been forced to flee their homes amid a devastating national bushfire crisis that has seen authorities struggle to contain hundreds of blazes.

The fires have killed six people, destroyed more than 680 homes and burned nearly 3 million acres (1.2 million hectares) of bushland, and conditions are expected to deteriorate this week.

Tornadoes swept across swaths of the southeastern United States killing at least two people in northern Alabama and one person in Louisiana, tearing roofs off buildings, splintering trees and downing powerlines, officials said.

Most of the tornado and storm damage was reported in parts of Louisiana, Mississippi, Alabama and Texas starting early Monday, sheriff’s officials told local media.

Survey teams will be sent out at first light Tuesday to assess the extent of the damage, said Rich Thompson, a lead forecaster at the National Weather Service’s Storm Prediction Center.

More rain and wind is expected overnight and into Tuesday as the storms push off into southeastern Georgia, Florida’s panhandle and the Carolina coasts in the morning hours.

At least 28,300 people had power outages in Mississippi, Louisiana and Alabama, according to the tracking site Poweroutage.Us.

It’s only December and reservoirs are already 78.1 per cent full